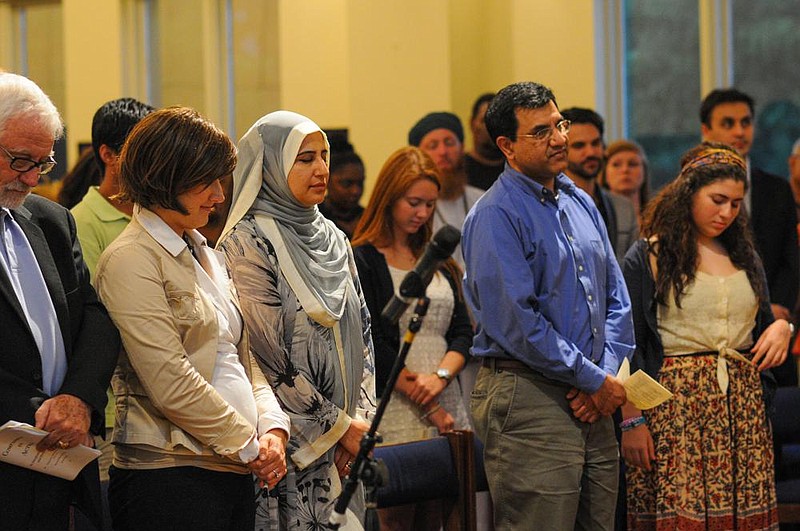 Sophia Said (center), executive director of the Interfaith Center and founding chairwoman of the Madina Institute and Mosque, stands with members of varying faith backgrounds at the 2014 “Love Thy Neighbor” service. The interfaith event has shifted to an online platform this year due to the coronavirus pandemic. (Special to the Democrat-Gazette/Dixie Knight)

An area interfaith event centered on gathering in-person to experience diverse religious traditions and celebrate unity has made the leap this year to a virtual venue, and in doing so has geographically expanded the potential for its offerings and its audience reach.

"Love Thy Neighbor," which in recent years has been held at Saint Mark's Episcopal Church in Little Rock, will be streamed at 6 p.m. Thursday on YouTube, with the theme "Rebuilding Hope," while cooking demonstrations featuring multicultural dishes will be streamed in place of the Interfaith Food Festival held after the service.

First created to commemorate the 10th anniversary of 9/11, "Love Thy Neighbor" is sponsored by the Arkansas House of Prayer -- a shared ministry of St. Margaret's Episcopal Church in Little Rock and the Episcopal Diocese of Arkansas -- and the Interfaith Center, part of the Institute for Theological Studies at St. Margaret's.

The coronavirus pandemic that first shuttered businesses, restaurants and most houses of worship to in-person services in March has resulted in many faith communities shifting their gatherings to online platforms, checking in with one another by phone and organizing drive-thru efforts for food pantries and other community services.

For the interfaith community, it meant going online for classes on world religions, sessions on silence in faith traditions and undertakings such as its annual Interfaith Friendship Camp for students of various religions to learn about other faith traditions. (In the case of the camp, a spy-theme curriculum included trips to worship houses with parents instead of other students, and concluded with an in-person parking-lot parade.)

The pandemic also brought new considerations for "Love Thy Neighbor," with featured guests now able to be included in the event from anywhere in the world; the faith leaders addressing those tuning in to this year's event have a national and international appeal, underlining the importance of interfaith work, according to Sophia Said, executive director of the Interfaith Center.

"There is a realization in our community and our nation that peacemaking is more important than ever," she said. "When people of different faiths, leaders of different faiths, model the behaviors that [say] we acknowledge, accept, respect and celebrate each other's ... commonalities and our differences, it gives people hope -- hope that anything can happen."

Faith leaders who will speak about rebuilding hope are the Most Rev. Michael Curry, the 27th Presiding Bishop and Primate of the Episcopal Church; Rabbi Hara Person, chief executive of the Central Conference of American Rabbis; award-winning jazz musician, poet, writer and community organizer MarQuis Hunt of Little Rock; Shaykh Didmar Faja, the imam of the United Islamic Center of Arizona in Phoenix; and Shabari Ursula Honegger, president of the humanitarian and spiritual-work organization Datta Kriya Yoga Center in Switzerland.

"I think ... people are hungry to get to know each other, and there is a desire in human beings' hearts to connect with other people at their basic core human level -- and this program gives us the environment and the space to do that," Said said.

Musician John Willis, a music director at two churches and a teacher at Pulaski Academy, said the work involved in creating a virtual program amounted to a "total redesign" to retain the spirit and the flow of previous years' Love Thy Neighbor events and the multigenerational, multifaith and racially diverse community it is dedicated to providing.

"It's not just about putting everything onto a rectangle and making sure everybody has the password to get in to look at the rectangle," Willis said. He noted that organizers for this year's event spent more time "talking on a spiritual, philosophical and ethical level about what was going on [in the world]" in the midst of the pandemic and worldwide protests against racism and police brutality after the death of George Floyd in May.

"This pandemic has really moved us into a deeper level of engagement and reverence for this work that we're doing with the Love Thy Neighbor interfaith event," Willis said.

Sound will still factor into the gathering in a big way, with sounds such as calls to prayer across faith traditions being a feature, as will prayer in unison and song, and a brief silence. Little Rock native LaSheena Gordon will perform during the program, as will the Fosters, a singing family of four based in the area.

One of the two songs the Foster family selected that will be featured during the program is "People Get Ready," by the late Curtis Mayfield, which includes the lyrics:

"People get ready, there's a train to Jordan

picking up passengers coast to coast

Faith is the key, open the doors and board them

there's hope for all among those loved the most."

'[These] songs have kind of an uplifting feel to them, but the message is really serious," Willis said. "It's, 'Now is the time -- we've been waiting and ... we can't wait anymore.' We've all got to get on board, so to speak ... to help create the change, to rebuild the hope," he said.

In keeping with the theme, Willis said this year's music is "not a lot of happy, rosy sunshine and lollipops and rainbows.

"It's addressing the fact that our hopes have been destroyed in a lot of ways, and for many people -- Black and brown people in particular, in our country and throughout the world -- hope has been something that has been destroyed, eroded intentionally, dismantled and taken apart for years, for generations.

"We felt really called to address the anxieties and the fears and the hurt and the outrage and the mourning that surround what we're all going through right now as a part of the process of rebuilding this hope," Willis said.

Annabelle Tuck, a member of Congregation B'nai Israel who has been involved with organizing the event, described the rebuilding of hope as a journey. A "very young" child during the polio pandemic in the 1950s, Tuck recalled talk of children being kept home and not being allowed to go swimming for fear of contracting the disease that could cause lifelong paralysis or death.

"It's all a journey, and this journey just happens to be a little different ... because we're keeping that faith," said Tuck, a former state Supreme Court justice who has taught and shared knowledge from the Jewish faith tradition in classes and workshops. "We're keeping that hope and kind of going forward in it, knowing there will be another side to this."

IN ITS NINTH YEAR

Susan Sims Smith, an Episcopal priest and founder of the Arkansas House of Prayer, has helped organize "Love Thy Neighbor" since its beginning. The event, now in its ninth year, was first held on the grounds of the House of Prayer.

Smith recalled a children's book about the birth of Jesus with a depiction of villagers who are called to view the baby Jesus. Her 28-month-old grandson pointed to a woman and a girl in the doorway of the stable, each wearing a headscarf in the cold night.

"Big Sophia, little Sophia, see baby Jesus," he'd said, referring to Sophia Said, who wears the hijab as an adherent to Islam, and is a frequent visitor at Smith's home.

"In the mind of the next generation, having a Muslim woman and a Muslim child ... this was a hijab and they were both Sophia," Smith said. "He feels God's love in Sophia, and he doesn't have any rules that she's Muslim and he's Christian. That is the hope of the future."

Love Thy Neighbor will be held at 6 p.m. Thursday at youtube.com/user/theinterfaithcenter; more information on the Interfaith Center and the Arkansas House of Prayer can be found at theinterfaithcenter.org and arkansashouseofprayer.org. 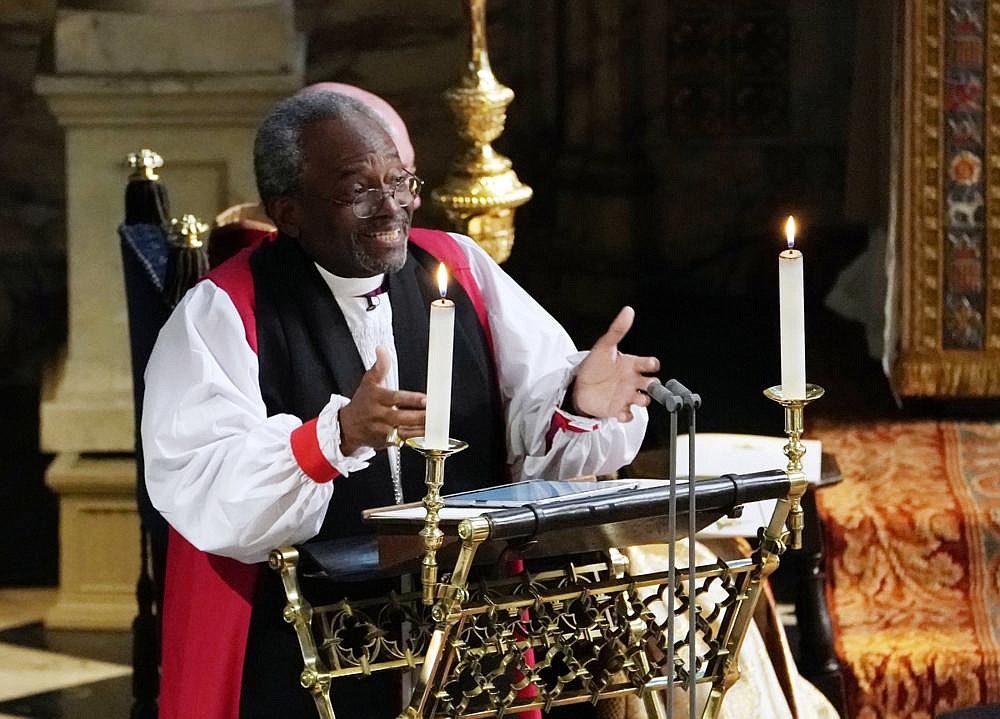 The Most Rev. Bishop Michael Curry, primate of the Episcopal Church, speaks during the wedding ceremony of Prince Harry and Meghan Markle at St. George’s Chapel in Windsor Castle in Windsor, England, in May 2018. Curry is one of the faith leaders set to speak at this year’s annual interfaith event “Love Thy Neighbor,” which has gone virtual due to the coronavirus pandemic. (AP/Owen Humphreys) 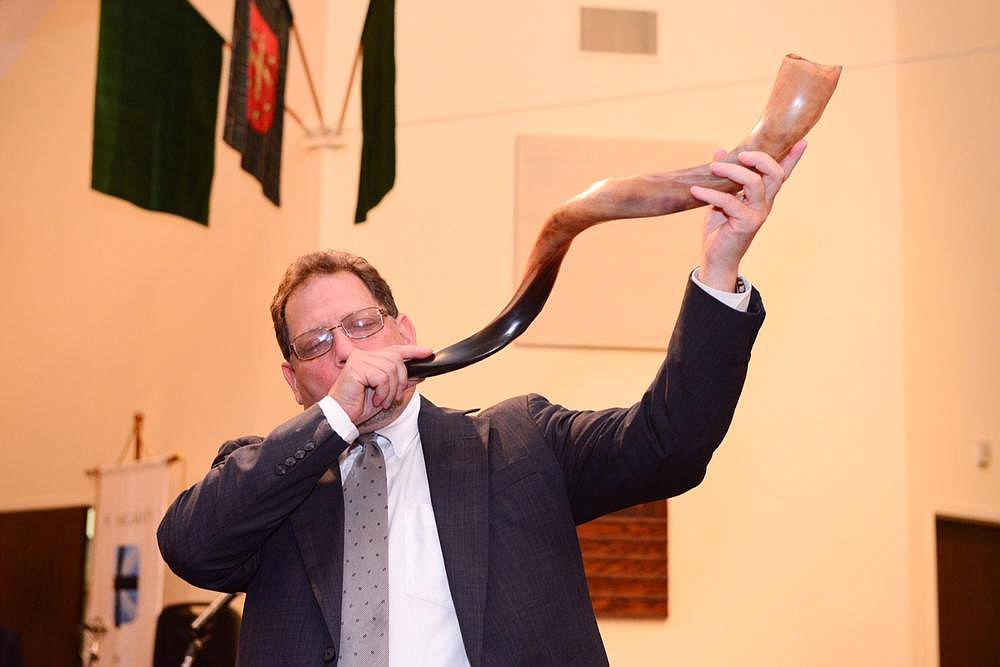 Rabbi Kalman Winnick blows the shofar during the 2014 Love Thy Neighbor interfaith prayer gathering in Little Rock. This year’s gathering will be held online on Thursday at the Interfaith Center’s YouTube channel. (Special to the Democrat-Gazette/Dixie Knight)