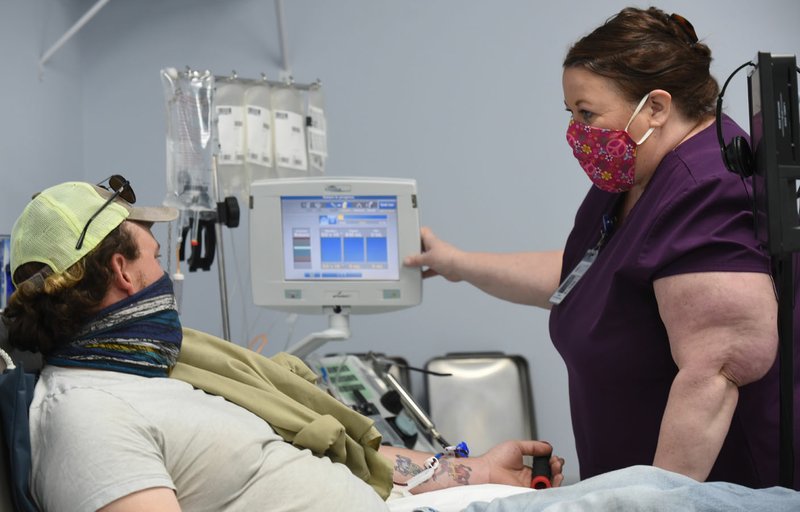 Linda Byrd, a donor specialist at the Community Blood Center of the Ozarks, visits Monday with donor Dakota Pottridge as he donates plasma at the center in Springdale. Pottridge has recovered from covid-19 and is donating the plasma to help treat other sick patients. (NWA Democrat-Gazette/David Gottschalk)

SPRINGDALE -- Hospitals in Northwest Arkansas are continuing to accept plasma from patients who have recovered from covid-19 in hopes the antibodies will help others who are hospitalized with the the virus.

The Food and Drug Administration on Aug. 23 issued an emergency use authorization for convalescent plasma to treat covid-19.

The Community Blood Centers of the Ozarks accepts plasma donations. Plasma is the yellow liquid part of blood that contains antibodies, which are proteins made by the body in response to infections. Convalescent plasma from patients who have already recovered from covid-19 may contain antibodies against covid-19, according to the administration.

Chris Pilgrim, spokesman for the blood centers, said donations have increased since it announced one donor each week would randomly be given a $500 gift card. The center has delivered an estimated 500 donations to Northwest Arkansas hospitals since April, he said.

Dr. Stephen Hennigan of Northwest Health said the use of the plasma hasn't been studied well enough to know its effectiveness. Treating patients with plasma for a new virus that kills roughly 4% of those infected makes it difficult to know whether the plasma saved patients or if they would have survived without it, he said.

"Convalescent plasma is not a game changer. This is something that helps some people and some people we give it to don't get better," he said. However, he said, "It's one of the best things we have."

Whether to use plasma is up to individual doctors' philosophies, Hennigan said. He's happy to treat any patient who is sick enough to be hospitalized with convalescent plasma because he believes it has helped some of his patients.

Doctors have no evidence plasma will hurt patients, making it ineffective at worst, he said.

"Some doctors will not use it until they know it's going to work," he said.

Mercy Hospital Northwest Arkansas in Rogers has received plasma from the Blood Center, according to Jennifer Cook, spokeswoman for Mercy.

"Mercy's need for convalescent plasma has diminished in the last few weeks because our number of hospitalized patients has dropped substantially," according to Cook.

Washington Regional Medical Center uses convalescent plasma to treat covid-19 patients with severe and/or life-threatening disease, according to Natalie Hardin, spokeswoman for the hospital. The treating physicians determine which patients receive the plasma.

"We encourage individuals who have recovered from covid-19 to talk to their physician about the possibility of donating plasma," according to Hardin.

Woodland Research Northwest clinic in Rogers is testing a possible treatment for covid-19. People 18 and older who have tested positive for covid-19 are eligible, and the clinic especially needs ethnic/racial minority volunteers. More information is available at joinaresearchstudy.com.