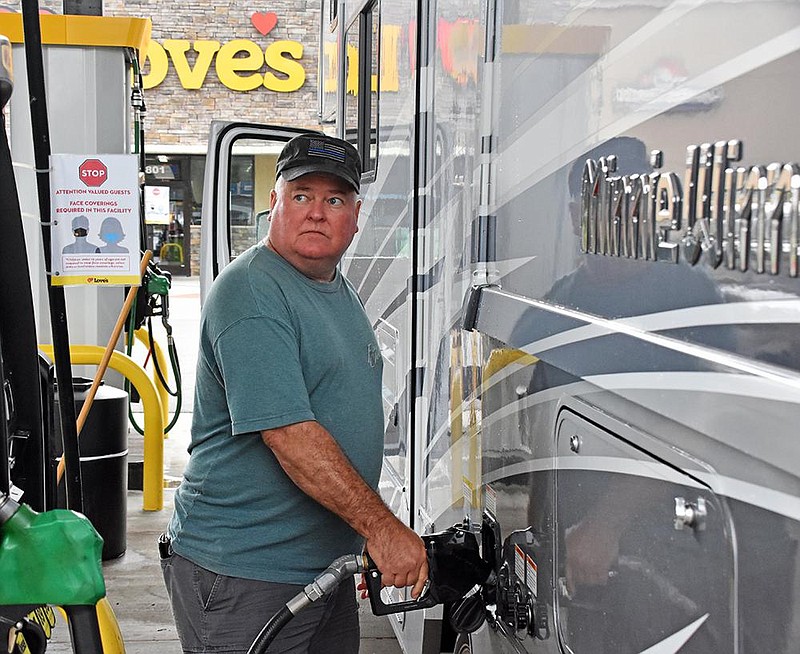 Jay White of New Boston, Texas, pumps gas into his recreational vehicle Wednesday at a Love’s Travel Stop in North Little Rock while traveling to Virginia with his family. (Arkansas Democrat-Gazette/Staci Vandagriff)

Many Arkansans will hit the road this weekend.

With the coronavirus still holding sway, travelers will avoid airplanes for the most part this Labor Day weekend, according to AAA, which is North America's largest motoring and leisure travel organization.

AAA isn't producing a Labor Day travel forecast this year because of the pandemic's impact on the economic data used to predict consumer travel, said Nick Chabarria, a regional spokesman for AAA in St. Louis.

"But we do expect car trips to be the main form of travel during the holiday weekend," he said.

"Regional data for Arkansas in AAA's 2020 Summer Travel Forecast shows that road trips will make up 97% of all travel ... through Sept. 30," Chabarria said. "AAA travel agents have seen this trend hold true throughout the summer with high interest in staycations in national parks, state parks and historical destinations."

Historically, Labor Day has signified the end of summer, a last chance to get away before cooler weather sets in.

But for months now, Uncle Sam has been urging people to stay home and maybe grill some food in the backyard.

"Travel increases your chance of getting and spreading covid-19," according to the U.S. Centers for Disease Control and Prevention. "Staying home is the best way to protect yourself and others from covid-19. You can get covid-19 during your travels. You may feel well and not have any symptoms, but you can still spread covid-19 to others."

The government offers guidance at cdc.gov for those who do travel, whether by air, car or rail. The main things to remember: wear a mask, stay 6 feet from others and wash your hands often.

Air travel can be problematic, according to the CDC.

"Air travel requires spending time in security lines and airport terminals, which can bring you in close contact with other people and frequently touched surfaces," according to the CDC. "Most viruses and other germs do not spread easily on flights because of how air circulates and is filtered on airplanes. However, social distancing is difficult on crowded flights, and sitting within 6 feet of others, sometimes for hours, may increase your risk of getting covid-19."

Air travel took a dive after the pandemic became widespread in the U.S. in March.

The number of passengers boarding flights at Little Rock and Northwest Arkansas airports dropped by 93% and 95%, respectively in April, when compared with April 2019.

Since then, things have improved a bit.

In July, Bill and Hillary Clinton National Airport/Adams Field in Little Rock had 37,462 outbound passengers, and Northwest Arkansas National Airport had 25,447. Those numbers reflect a decrease of 65% and 72% when compared with July 2019.

Still, that's only a fraction of the passengers those airports are accustomed to seeing.

"As far as Labor Day goes, I am not expecting much," said Kelly Johnson, director of the airport in Northwest Arkansas.

One good thing for drivers is that gas prices dropped when the pandemic set in months ago and have remained low.

On Monday, AAA reported that gas prices had spiked by a nickel a gallon to an average of $2.23 nationally, but the price is expected to drop during the week.

Pump prices jumped because of Hurricane Laura and an increase in demand, according to a news release from AAA. Monday's national average is a nickel more than last month, but 35 cents cheaper than a year ago.

Many travelers will be on the water this weekend.

The U.S. Army Corps of Engineers is advising lake and river visitors to be cautious.

"Labor Day weekend is among the top three busiest weekends of the year at the region's lakes and rivers, and officials from the district say they expect this year will be no exception," according to the Corps' Little Rock District. "If you plan to be on the water this holiday weekend, please remember to wear your life jacket and don't overestimate your swimming abilities."

The U.S. Forest Service warns that too much water has been a problem in some places.

Because of heavy rainfall over the past two weeks, many recreation areas along swollen rivers and creeks in the Ouachita and Ozark-St. Francis National Forests have been closed, according to Mary Wood, a spokeswoman for the Forest Service.

Some roads have become unstable, washed out or dangerous, according to a news release from Wood.

She urges vacationers to check Facebook and Forest Service websites for updates and closure information.

Cassie Branstetter, a spokeswoman for the Buffalo National River, said authorities there were "expecting big crowds" this weekend.

"All reservable campsites are full this weekend, and some campers are already setting up in the first-come first-serve sites to stay through the holiday weekend," she said Wednesday. "The rain may end up becoming a bit of a deterrent, but it is bringing up the river levels nicely in parts of the river that are usually very low this time of year."

On Tuesday, the Arkansas State Parks agency sent out a news release reminding visitors that pandemic restrictions remain in place.

There has been some crowding at the state's three most popular state parks -- Pinnacle Mountain, Petit Jean and Devil's Den, said Meg Matthews, a spokeswoman for the parks agency.

As a result, some trails have been congested, and people have been parking along roads when parking lots are full.

"We only allow visitors to park in the parking lot in designated parking spaces," said Cale Davenport, assistant superintendent at Pinnacle Mountain State Park. "Once those spaces are filled, we are at full capacity. Some visitors have resorted to parking outside the park and walking in. However, that is not allowed, and those vehicles will be ticketed."

While those three state parks are loved by many, Matthews said people should explore other state parks in Arkansas.

"We do have 52 state parks, one for every weekend of the year," she said. "So we want to encourage people to try out another park, maybe one that's nearby that you haven't been to before."

A map showing the location of state parks is available at arkansasstateparks.com/parks/map.

Grady Spann, director of the state parks agency, said he's expecting 150,000 people in state parks this Labor Day weekend. He said they've been averaging about 200,000 visitors a week and have had 3.8 million since mid-March.

But people need to follow the rules, Spann said.

"We realize that many people enjoy hiking at Pinnacle Mountain, Petit Jean, and Devil's Den state parks and want to keep the trails available to the public," he said. "But safety always comes first. Cooler temperatures in the morning and evening hours have expanded the number of people using these parks and we have seen a decline in covid-19 rules being followed.

"We would like to urge everyone to abide by the conditions set out at this time, so we do not have to resort to closing off certain areas for use. We expect our park guests to be responsible park users with the pandemic and in leaving no trace."