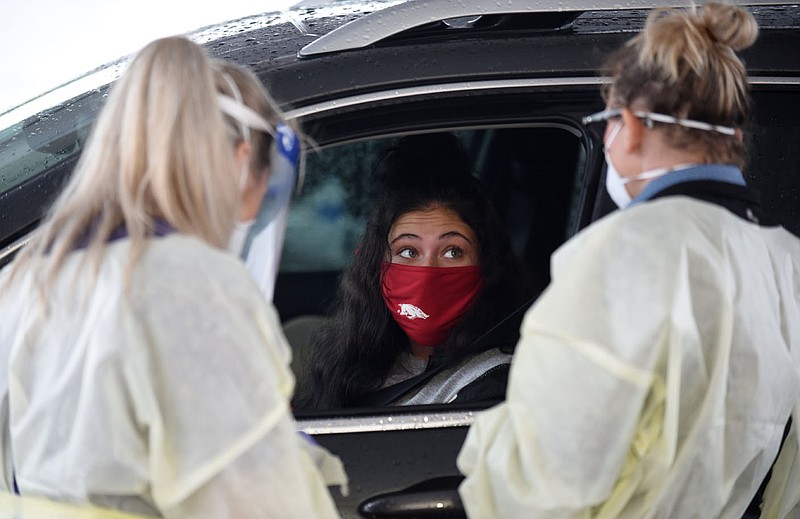 Karson Freeman, a freshman at the University of Arkansas from Little Rock, prepares to insert a long swab Tuesday, September 1, 2020, into her nasal cavity during a drive-through covid-19 testing clinic set up across from Baum-Walker Stadium at the corner of South Razorback Road and West 15th Street in Fayetteville. The Arkansas Department of Health is working with the support of staff from the Pat Walker Health Center to test students, faculty and staff. The drive-through testing will continue today and Thursday from 8:00 a.m. to 2:30 p.m.. The drive through testing is in addition to the covid-19 testing that is available on campus five days a week for University students, faculty and staff. Check out nwaonline.com/200902Daily/ and nwadg.com/photos for a photo gallery. (NWA Democrat-Gazette/David Gottschalk)

FAYETTEVILLE -- The city's public health officer hopes to compile antigen test results from local clinics to help paint a better picture about the number of cases of covid-19 in the city.

The city's Board of Health on Monday sent a letter to Gov. Asa Hutchinson asking for antigen test results to be disclosed along with polymerase chain reaction, or PCR, test results. Antigen tests typically take a few hours to get results back, while PCR tests usually take at least a day or two.

Hutchinson on the same day released statewide antigen results, and continued to do so at subsequent news conferences this week. However, the board was looking for local data, said its chairman, Hershey Garner, during the board's Wednesday meeting held on Zoom.

Marti Sharkey, the city's public health officer, said she's started to get antigen test results from clinics associated with Medical Associates of Northwest Arkansas. Karas Health Care and Community Clinic also do antigen tests, and Sharkey's own pediatric clinic does a few. She said she wants to compile the data from as many clinics as she can and present the results to the board regularly.

Washington Regional Medical Center only does the PCR tests. A mass testing event held this week for University of Arkansas students also used the PCR tests.

Antigen tests are designed to test people who have symptoms, Dillaha said. Early on in the pandemic, people who had a positive antigen test were asked to then get a confirmed PCR test, she said. The state has separated antigen results from its daily case reports.

"Nowadays we have enough experience with the antigen tests to know that the positive result is reliable," Dillaha said. "So a confirmatory test, or a positive result, is not necessary."

However, the antigen tests are more likely to present a false negative result, Dillaha said. In that instance, the person should still get a PCR test if exposure is suspected, she said.

The board sent the letter to Hutchinson because local clinicians at the Karas and MANA-affiliated clinics last week started noticing higher posititivity rates among university students and workers on Dickson Street using the antigen tests, Sharkey said.

Ann-Marie Magre with MANA Family Medicine South on Huntsville Road said initially university students who came to the clinic were hesitant to say where they went to school for fear of causing a shutdown at their sorority or fraternity.

"I mean, they had Texas plates with Greek letters, but they didn't go to the University of Arkansas," she said.

Board members praised the university's plan to handle covid. Everyone seems to be behaving responsibly on campus, they said.

It's the off-campus gatherings that could become troublesome. Magre said she's seen students at her clinic who said they went to a party with people crammed into an apartment, for instance.

"They all come in within two or three days and they're all getting swabbed," she said.

To see the University of Arkansas covid-19 cases, go to: