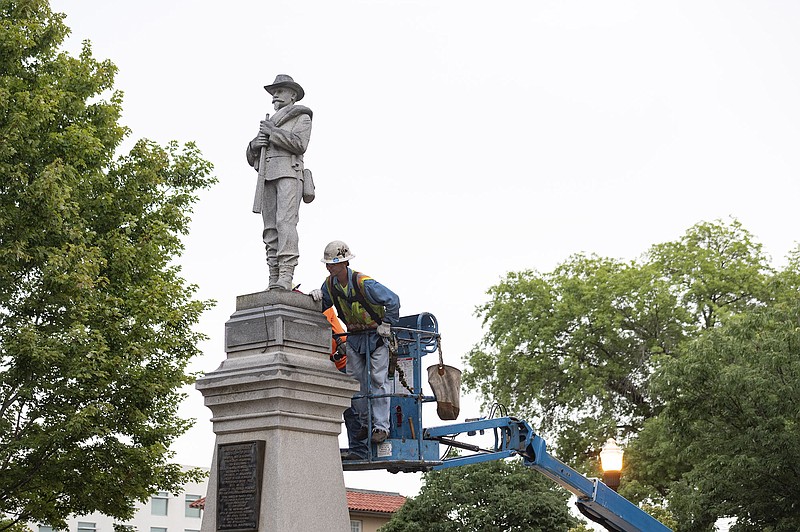 BENTONVILLE -- The Confederate statue that stood watch on the downtown square for more than 100 years was quickly lifted from its perch, moved to a flatbed truck and taken away.

The Arkansas division of the United Daughters of the Confederacy, the group owning the monument, announced June 1 it would move the statue to a nearby private park.

Dozens of people gathered to watch Wednesday morning as a crane lifted the Confederate soldier from the monument base. The statue was driven to an undisclosed temporary location.

"I've been waiting on this moment for 10 years since we moved here from Fayetteville," said Keely Brice, who lives three blocks from the square. "It's progress. It's long overdue."

[Video not showing up above? Click here to view » https://www.youtube.com/watch?v=IGxnPkPkW4I]

Brice said she hopes to see practical and constructive progress toward racial equality.

"Taking down this symbol is a good start," she said.

Fred Blair said he's lived in Bentonville since 1996. The statue defined the downtown, he said.

"Everybody has their own opinions, and that's what makes this a great country," Blair said. "Some of us are for it, and then some people are against it."

Todd Shannon of Bella Vista said he grew up near the square and remembers climbing on the statue with his friends.

"I don't understand why you would take it down," he said. "It's part of our history."

Workers from Nabholz Construction removed the statue. Some spectators cheered as the crane held the statue high above the square. The workers then spent the rest of the day removing the base and completed the job a little before 4 p.m.

Joey McCutchen, who represents the Daughters of the Confederacy, watched the removal.

"It's going to be a new chapter," he said. "We pretty much have completed the designs for the new park."

The monument will be refurbished and kept secure before it is moved to the park, McCutchen said. The monument has been vandalized several times over the years.

"It's a bittersweet day to us, but I think it's a win-win for everyone," he said.

The monument, which consists of a pedestal and a statue of a bearded Confederate soldier, has been on the downtown square since 1908. It was on property owned by the county, Benton County Judge Barry Moehring said. Bentonville maintains the property, including beautification. The monument has been listed on the National Register of Historic Places since 1996.

The Arkansas Historic Preservation Program State Review Board in Little Rock at its Aug. 5 meeting recommended the National Park Service keep the monument on the national register after it is moved. A response from the park service usually takes between 30 to 45 days, Melissa Whitfield, spokeswoman for the Arkansas Department of Park, Heritage and Tourism, previously said.

The sculpture and its base are granite. The James H. Berry chapter of the United Daughters of the Confederacy sponsored the monument in honor of the county's Confederate veterans, according to the Historic Places registration form. Berry paid $1,500 of the statue's $2,500 cost, according to the form.

The agreement to remove the statue will allow the Daughters of the Confederacy to display and preserve the historical significance of the monument and its connection to the history of Benton County in perpetuity, according to the group's release, which was issued June 1.

The group will work with the Benton County Historical Society and other community members to move the monument to James H. Berry Park, a private park adjacent to the Bentonville Cemetery, where Berry is buried. The cemetery is at 400 S.W. F St., just southwest of downtown.

The Historical Society will own and operate the park and display the monument, according to the release.

Moehring said removing the statue was done in a collaborative manner. He sent an email to justices of the peace and other elected county officials detailing the move. Moehring also was on the square Wednesday morning.

"The event itself was executed peacefully and respectfully," Moehring wrote. "I was heartened to see that many people representing a variety of viewpoints gathered on the square to witness this historic event. Without exception, they treated each other cordially and politely."

Moehring said he talked with Mayor Stephanie Orman about what will replace the monument.

"At this time, there is no plan or timetable to replace the statue with anything else," he said.

A news conference will be held next week to discuss the Berry Park project, McCutchen said. Work on the park could start by the end of the year, he said. 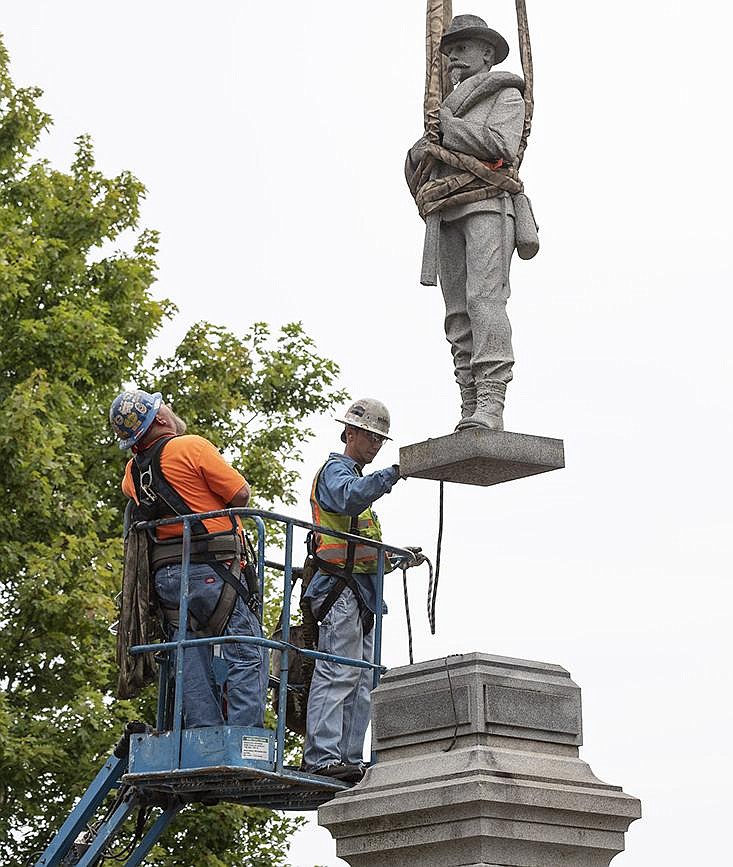 The statue of a Confederate soldier is lifted from its base Wednesday as workers from Nabholz Construction remove it from the Bentonville square. More photos at arkansasonline.com/93removal/. (NWA Democrat-Gazette/Spencer Tirey) 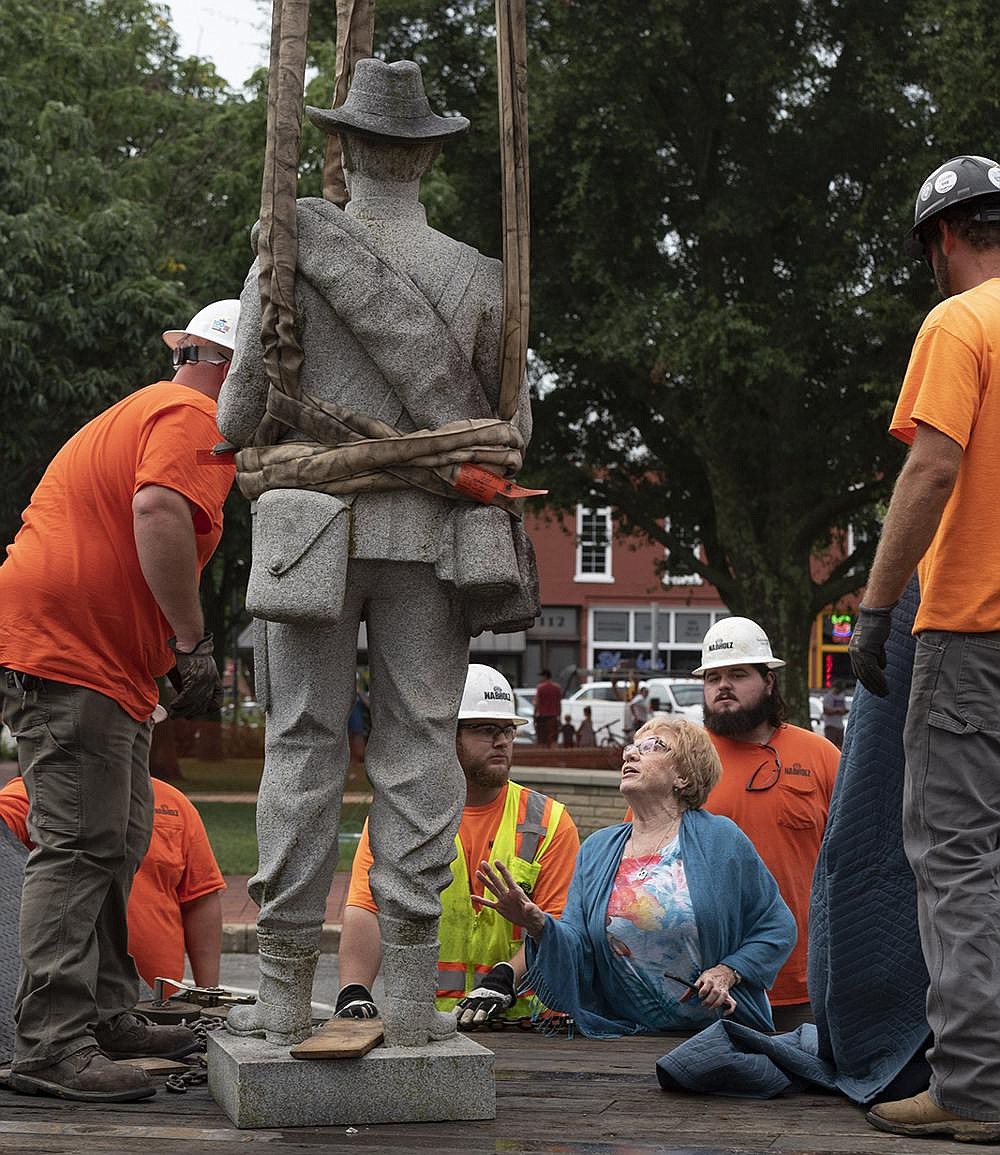 Ann Rossie, with the Arkansas Division of the United Daughters of the Confederacy, checks on the statue of a Confederate soldier after workers from Nabholz Construction removed it from the Bentonville square Wednesday. The Daughters of the Confederacy worked with the Benton County Historical Society and other community members to move the monument to James H. Berry Park, a private park adjacent to the Bentonville Cemetery, where Berry, a former U.S. senator and the 14th governor of Arkansas, is buried. (NWA Democrat-Gazette/Spencer Tirey)
More News

Berry served as a Civil War officer, lawyer, Arkansas legislator, speaker of the state House of Representatives and circuit judge for the 4th Judicial District. He was elected Arkansas’s 14th governor and then served as a U.S. senator from 1885 to 1907.