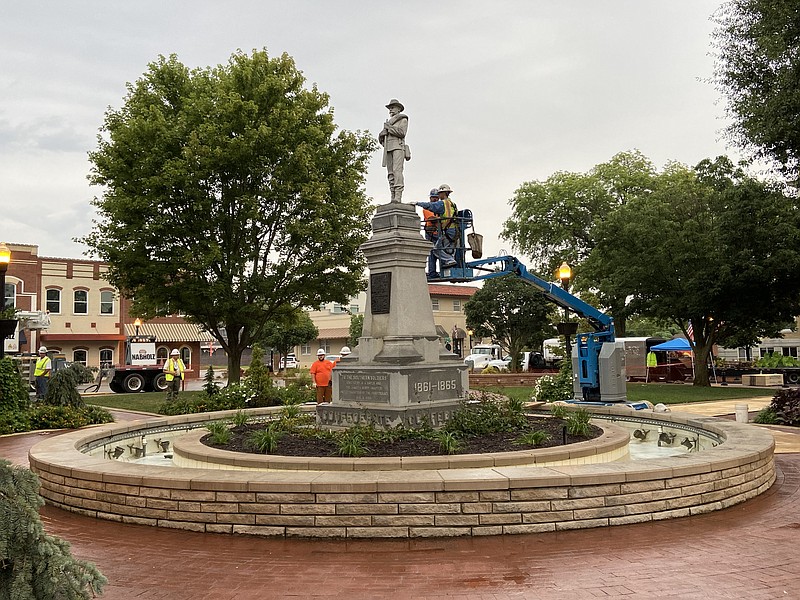 People are gathering Wednesday, Sept. 2, 2020, on the Bentonville Square as a crew prepares to remove the Confederate Monument. (Spencer Tirey/NWA Democrat-Gazette)

BENTONVILLE — Crews and a gathering crowd are at the Bentonville Square this morning as a crew prepared to remove the Confederate monument, which has become a focal point for anti-racism efforts.

About 30 people were watching by 7:30 a.m.. Wednesday as a crane prepared to remove the statue from its perch.

County Judge Barry Moehring said it is expected to take most of the day to remove the monument. He said it has to be removed in sections.

The group owning the monument, the Arkansas division of the United Daughters of the Confederacy, announced June 1 it would move it to a private park. The Daughters of the Confederacy are working with the Benton County Historical Society and other community members to move the monument to James H. Berry Park, a private park adjacent to the Bentonville Cemetery, where Berry is buried. The cemetery is at 400 S.W. F St., just southwest of downtown.

The monument, which consists of a pedestal and a statue of a bearded Confederate soldier, has been on the downtown square since 1908. The property on which the monument rests is owned by the county, Moehring previously said. Bentonville maintains the property, including beautification. The monument has been listed on the National Register of Historic Places since 1996.

The monument will be refurbished and kept in a secure location before it is moved to the park. The park project is in the design phase, Joey McCutchen, who represents the United Daughters of the Confederacy in Arkansas, said last month.

The sculpture of a bearded soldier and its base are made of granite. The monument was sponsored by the James H. Berry chapter of the United Daughters of the Confederacy in honor of Benton County’s Confederate veterans, according to the Historic Places registration form. Berry paid $1,500 of the statue’s $2,500 cost, according to the form.

The agreement to remove the statue will allow the Daughters of the Confederacy to display and preserve the historical significance of the monument and its connection to the history of Benton County in perpetuity, according to the group’s release.

The Benton County Historical Society will own and operate the park and display the monument, according to the release.