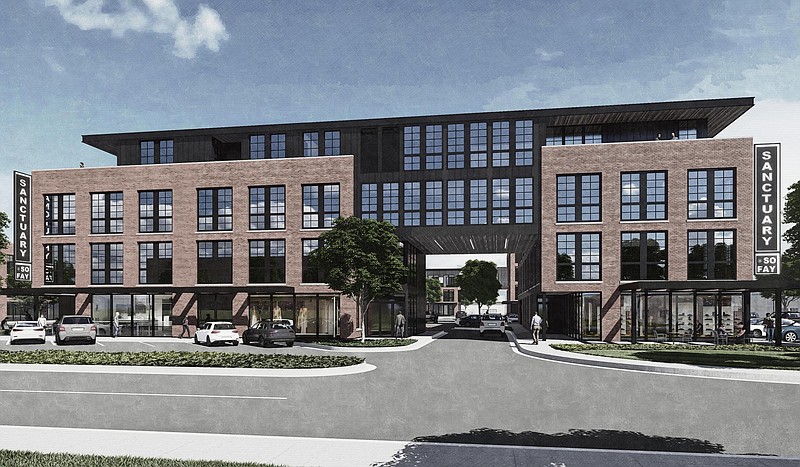 FAYETTEVILLE -- Vacant land on the south part of town got a step closer to becoming a "sanctuary."

The land was zoned for apartments up to 24 units. The new zoning, community services, allows a variety of residential and commercial uses.

Most of the land lies within a floodplain. Much of the council's discussion centered around that issue. Changing the zoning doesn't change any of the city's requirements for building in a floodplain, nor Federal Emergency Management Agency regulations, staff told the council.

Changing the zoning will encourage buildings to go closer to 15th Street, which is the part of the land with the most buildable area, away from the surrounding streams, City Attorney Kit Williams said. Town Branch crosses the property going east-west, College Branch runs north-south and Cato Springs is to the southwest.

The request came from the development team behind the planned Sanctuary at SoFay. The project involves a 32,000-square-foot building with 24 residential units, office space and retail or restaurants on the ground floor.

The development plan for Sanctuary at SoFay will go as a separate item before the Planning Commission. As a rezoning request, the council could only consider potential land uses, not a specific project, Williams said.

Council Member Sarah Marsh, whose ward covers the south part of town, said she was excited to see the project moving forward.

"We desperately need more housing and services down in south Fayetteville," she said. "This parcel has been empty for as long as we can tell."

Council members Teresa Turk and Mark Kinion initially asked to hold the item to allow for more time for public notification and discussion of the floodplain. The rest of the council voted 6-2 to move it to its final reading and a vote, and Turk and Kinion supported it at at that point.

In other business, the council held until Sept. 15 a measure to potentially sell a small piece of land south of George's Majestic Lounge to Brian Crowne, the venue's owner, for $17,000.

The city received competing offers on the same land a couple years ago between Crowne and Craig Underwood, owner of Underwoods Fine Jewelers. At the time Underwood offered $25,000. The council decided against selling the land to either.

Council Member Matthew Petty, whose ward covers downtown, brought the item to the council. He said he felt Crowne's desire to put an outdoor stage on the land serves as the highest and best use. He said Underwood proposed employee parking at the space.

"Things have changed quite a bit, and my thinking has changed," Petty said. "Part of what I've realized in covid is just how hard hit and how fragile our tourism sectors are. Live event venues were the first to close, and they'll probably be the last to fully reopen."

The council also voted 8-0 to put $10.5 million toward building the first phase of the arts corridor downtown, effectively getting construction underway.

The first phase of the arts corridor involves turning the Fay Jones woods west of the Fayetteville Public Library into a nature attraction, improvements to the Razorback Greenway and creating streetscapes along West Avenue from South to Meadow streets.

Wade Abernathy, the city's facilities manager, said the move marks a milestone in the project.

Voters in April 2019 approved a $31.6 million bond issue to build an arts corridor downtown. Another phase involves turning the parking lot west of the Walton Arts Center into a civic plaza. A parking deck also will go on the northwest corner of West Avenue and Dickson Street to replace the lost parking spaces.

Abernathy said the first phase should finish in December 2021. A groundbreaking is planned at the Fay Jones woods next week.

• A contract with a software company which will enable online citation payment for Fayetteville District Court.

• Asking planning staff to look at using non-sectarian language in city code when it comes to religious institutions as land uses.