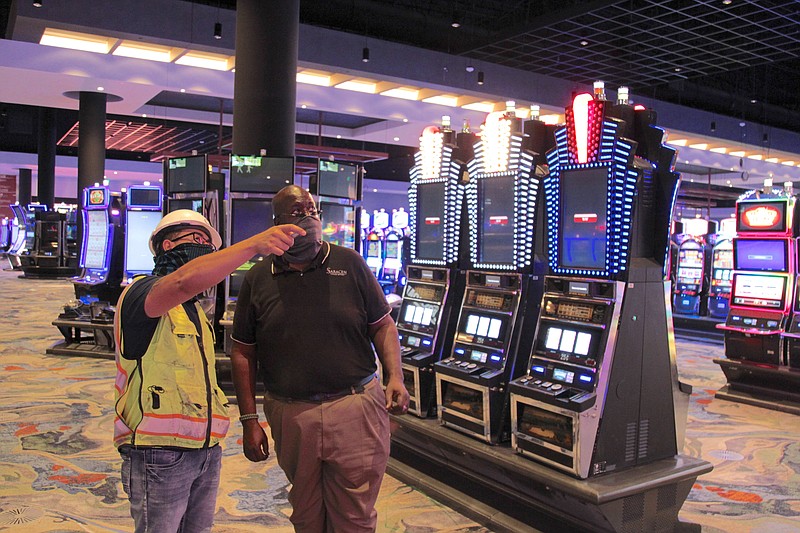 Suffolk Construction Site Supervisor Arturo Vazquez, at left, points out recent progress in the construction of the $350 million Saracen Casino Resort project, to Saracen Casino manager of events and promotions Henri Linton Jr. during a recent walk through of the site. According to Quapaw Chairman Joseph Tali Byrd, the casino will have a soft opening Oct. 1, and will have a grand opening Oct. 20.

Interest is running high in the new Saracen Casino Resort, which, although beset by delays because of abnormally high rainfall and material delays during the pandemic, has entered the final phase of construction and is set for an October opening.

Pine Bluff and Jefferson County officials recently had their first meeting with Chairman Joseph Tali Byrd, newly sworn in as head of the Quapaw Business Committee, the governing body of the Quapaw Nation.

Byrd defeated former Chairman John Berrey, in a July 25 election, and officially took the reins when he was sworn in to a two-year term as chairman on Aug. 15. Berrey, who had held the position for 20 years, was the face of the Quapaw Nation in Jefferson County, having made numerous visits to the area while establishing the site for the casino, beginning the construction, and monitoring the progress of the $350 million gambling and hotel resort.

Robinson described the meeting, which was held in the Quorum Court chambers at the county courthouse, as "cordial," but said he had some initial concerns.

"I don't think they have enough experience to step into an operation like that," Robinson said. "A transition of this sort at this particular time is not a mixture for success, so I am concerned. A change in leadership at this point in time, to me, it was just not the right time."

"There were some things we had asked as far as education," he said, "as far as UAPB, some ventures in the downtown area, some infrastructural things when it came to the city, roads, different things like that they were going to help us out on."

Washington said she understood Robinson's concerns and agreed that bringing in a new administration just as the casino is getting ready to open concerned her as well.

"He shared that in the room with us," she said. "I think that is a concern for everybody, but while that's a concern we still have to be as positive as we can and hope that they can make it."

Washington said committee members expressed that, with the amount of money already invested in the project, the Quapaws were committed to seeing it through to completion and making sure of its success, a sentiment she said she shares. She compared the commitment to seeing the casino project through to the commitment to reinvigorate Pine Bluff itself.

Byrd said the concerns Robinson aired in the meeting were understandable in light of the fact that everyone was still trying to get to know one another, especially considering his own recent election to the chairman position after all of the time Berrey had spent in the county.

"I know that I'm coming in late for the party and everyone's wondering, who the heck is this guy and what's he about?" Byrd said. "I understand that, but I'm committed to still keeping those relationships and that friendship between all parties. I asked the judge specifically what are these priorities and how can we help, what can we do?"

Byrd said nothing was specified in the meeting, but he said further conversations would probably give him a better idea of Berrey's commitments to the city and county and what he might be able to do in fulfilling those.

"Maybe that wasn't the right time to lay all of the cards completely out on the table," he acknowledged. "This was the first time any of us had met and maybe that was more of an introductory getting to know one another kind of thing with the expectation that we're going to continue on with further conversations and collaborations with one another."

Byrd said a visit to the construction site left him awestruck with the size and scope of the project as well as the progress made.

"I had some concerns going in to see Saracen for the first time but I was completely blown away, in a good way," he said. "To see where we are with the construction phase and to see all of the hands and subcontractors that are working to get this done and off the ground, I was impressed."

Byrd said the plan is to have a soft opening of the casino on Oct. 1 and to have the grand opening Oct. 20, a timetable that Saracen project manager Carlton Saffa said should be easily met.

Saffa said the gambling floor and seven restaurants contained inside the complex are in final stages of completion and with the exception of some cosmetic pieces, the interior is largely complete.

"The kitchens are being prepped, equipment is being dialed in and our chefs are finalizing their menus," Saffa said. "We've got all 2,000 slot machines and dozens of table games in the building and our slots team has begun testing the machines. In short, we are long past the point of bringing in building materials. Now we're bringing in the furniture."