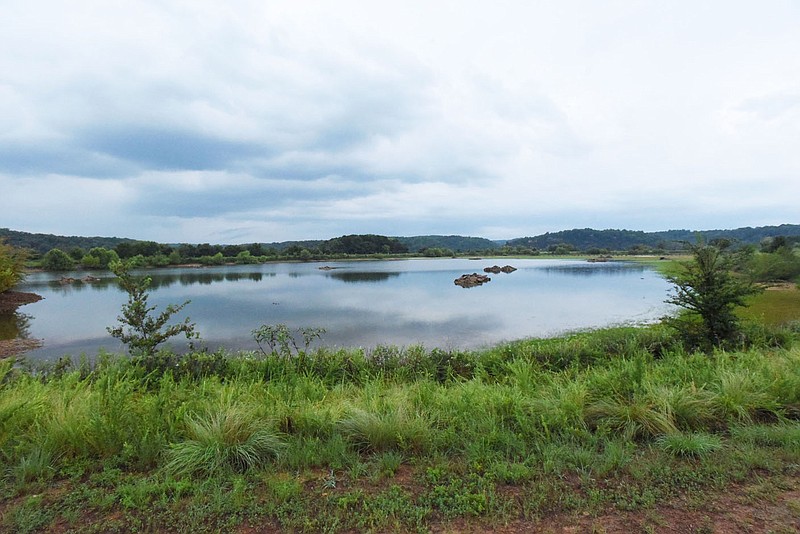 The main purpose of the Beaver Lake fish nursery pond is to raise fish that are stocked into Beaver Lake. Public land around the pond is a fine destination for bird watching, hiking and nature study. (NWA Democrat-Gazette/Flip Putthoff)

The Beaver Lake nursery pond gives the lake's fish population a boost. It's also a fine destination for bird watching, hiking or taking shelter from a wicked thunderstorm.

The 30-acre pond was built beside the lake in 1987 on U.S. Army Corps of Engineers land by the Arkansas Game and Fish Commission. Fish are raised each year at the pond and released into the lake through a large-diameter pipe.

Game fish such as smallmouth bass, largemouth bass, walleye, crappie and bluegill have been raised at the pond. The nursery pond was instrumental in getting a healthy population of native smallmouth bass and walleye established at Beaver. To start production, Game and Fish stocks the pond with adult fish during spring. Those fish spawn and produce hundreds of thousands of tiny fry that grow through the summer.

Those fry reach fingerling size of three to four inches by late August. That's when Game and Fish staff opens the pipe to drain the pond and release all those fingerlings into the lake. Bluegill and redear sunfish were raised in the pond this summer. The pond was drained in mid-August, releasing those fish into the reservoir.

Jon Stein, district fisheries supervisor with Game and Fish, said the release boosts the number of bluegill and redear for anglers, but their small size makes them ideal forage for larger fish.

The pond is about one-half mile north of Horseshoe Bend park on the east side of the lake. It's open to the public for all sorts of nature related activities. Fishing in the pond isn't allowed.

There's an oval-shaped two-track gravel road around the pond, which makes for level walking. One lap around the pond is a mile. There's a rest bench and small shelter along the route with a wildlife viewing blind.

Birds galore flock to the pond all seasons of the year. So do bird watchers like Joe Neal of Fayetteville and Joan Reynolds of Rogers, both active in the Northwest Arkansas Audubon Society. Visitors to the pond on a stormy Thursday morning Aug. 6 included Neal, Reynolds and her daughter, Samantha Heller, and photographer Terry Stanfill of the Decatur area.

Stanfill is never without his trusty monopod-mounted camera, always at the ready to capture pictures of birds, insects and the Ozarks landscape.

Neal visits the pond regularly. He's documented some 160 bird species at the pond. His pen hit his field notebook on this trip as soon as he shut his car door.

"There's a pine warbler right there," Neal said, glancing into the forest on the nursery pond property. "Oh look, there's some goldfinches flying right over us. And there's a bluebird."

Canada geese and herons were on a grassy bank beside the water. A dazzling array of habitat at the pond brings in all kinds of birds.

"This is a good place to come for people who don't have a boat but want to see the lake," Neal added. Miles of Beaver Lake can be seen from the nursery pond property. "They can see the lake and the surrounding hillsides," he said.

The western sky turned a scary shade of purple as the birders strolled around the oval. Then thunder rumbled.

"You've got two water habitats here," Neal said, with one eye on the blackening sky. "There's the pond itself and Beaver Lake. You've got mature forest, shrubs and grassy areas."

Small rain drops turned into heavy dollops. The birders made a quick dash to a small shelter at a wildlife viewing blind. The heavens opened their flood gates to let loose a major downpour. Neal finished his field notes, staying dry under the metal roof.

The deluge eased some, but the outlook appeared wet for the rest of the morning.

"Looks like a rain-out," Neal announced, but not before a pileated woodpecker flew by. The big bird was another species for Neal's trip tally.

Rain rain, it's here to stay. The birds will fly another day. 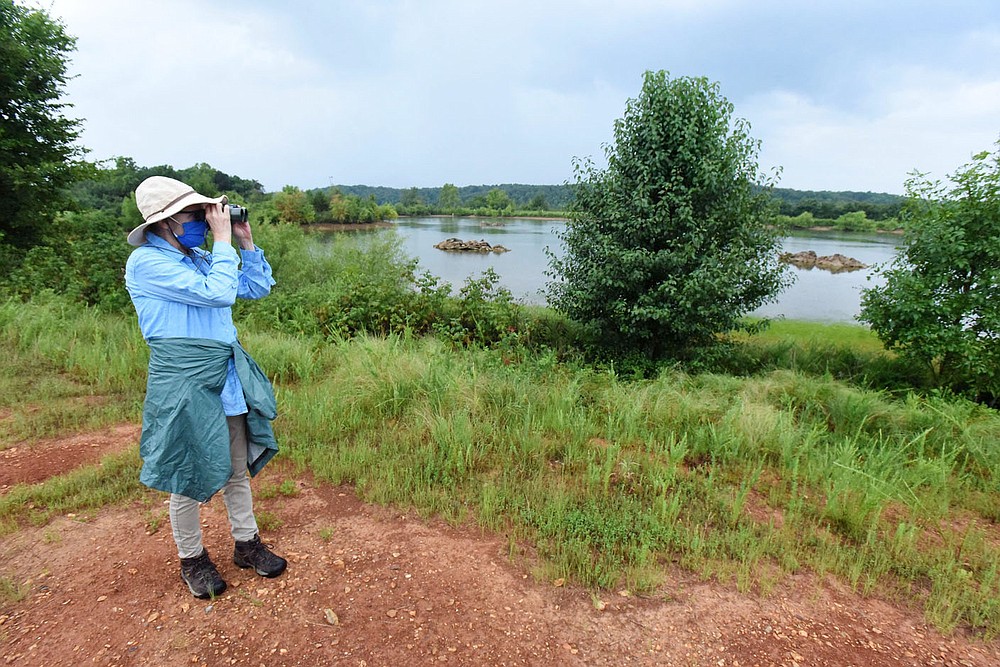 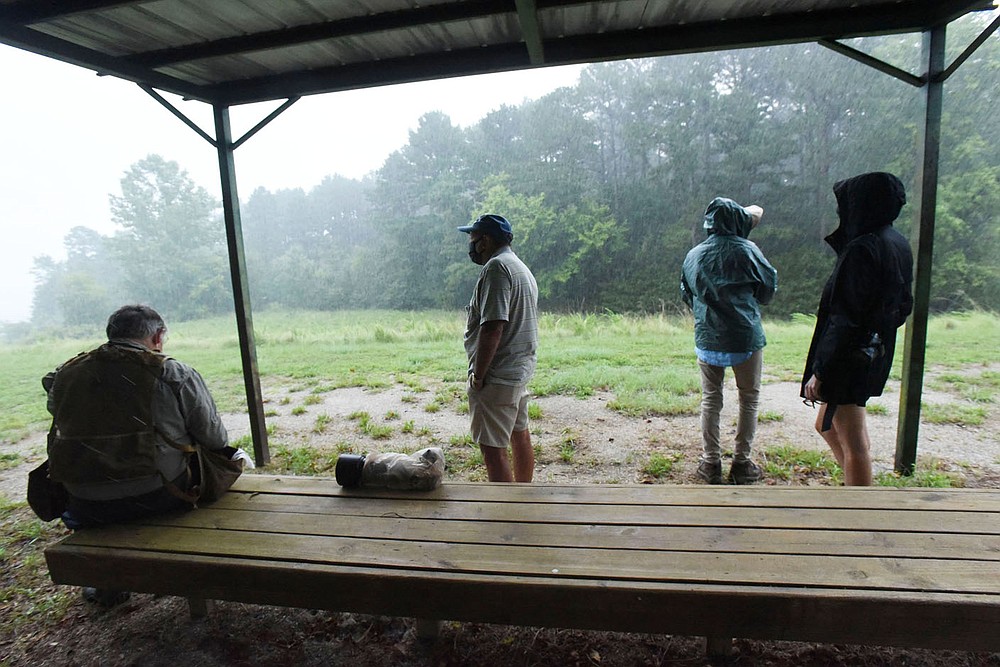 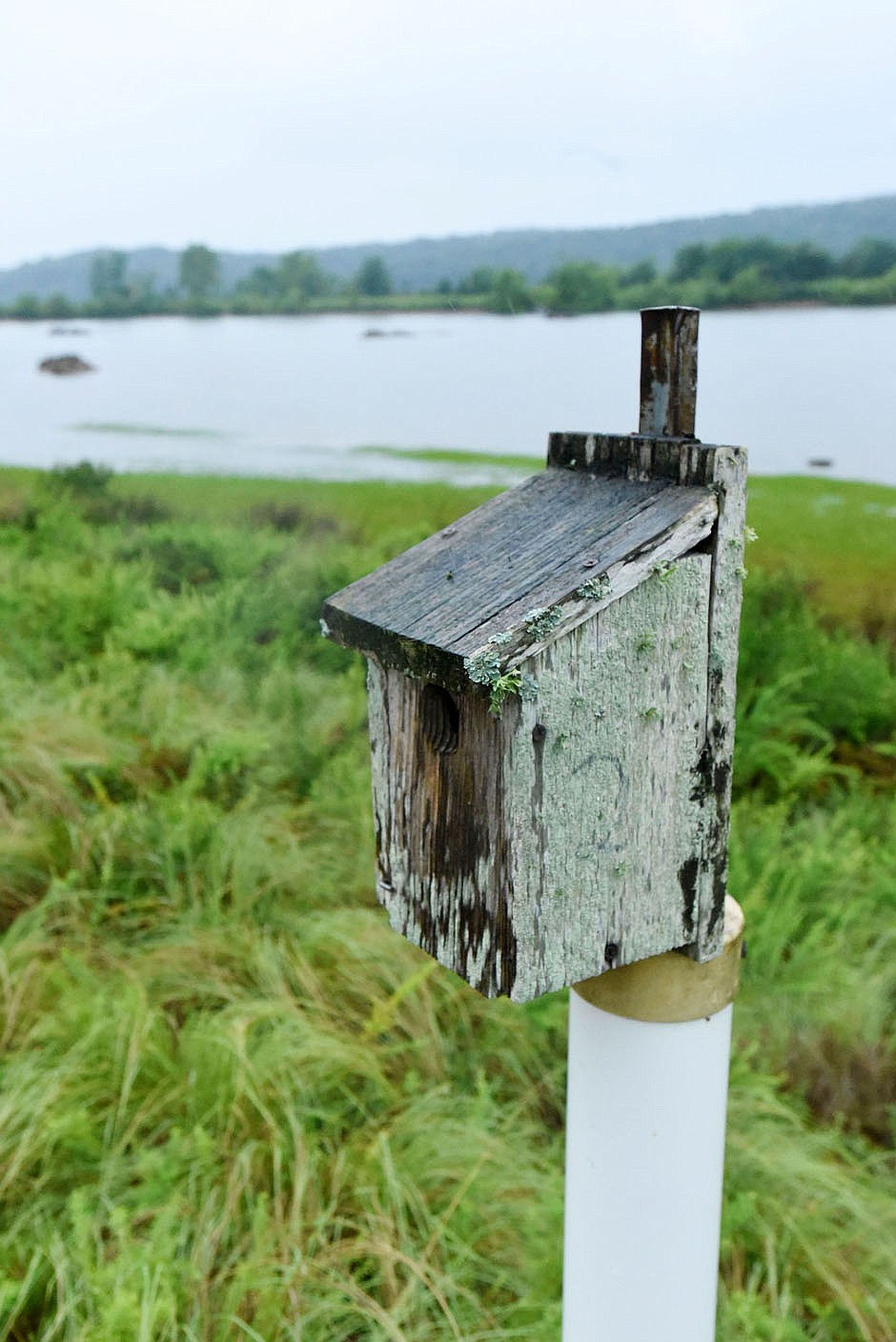 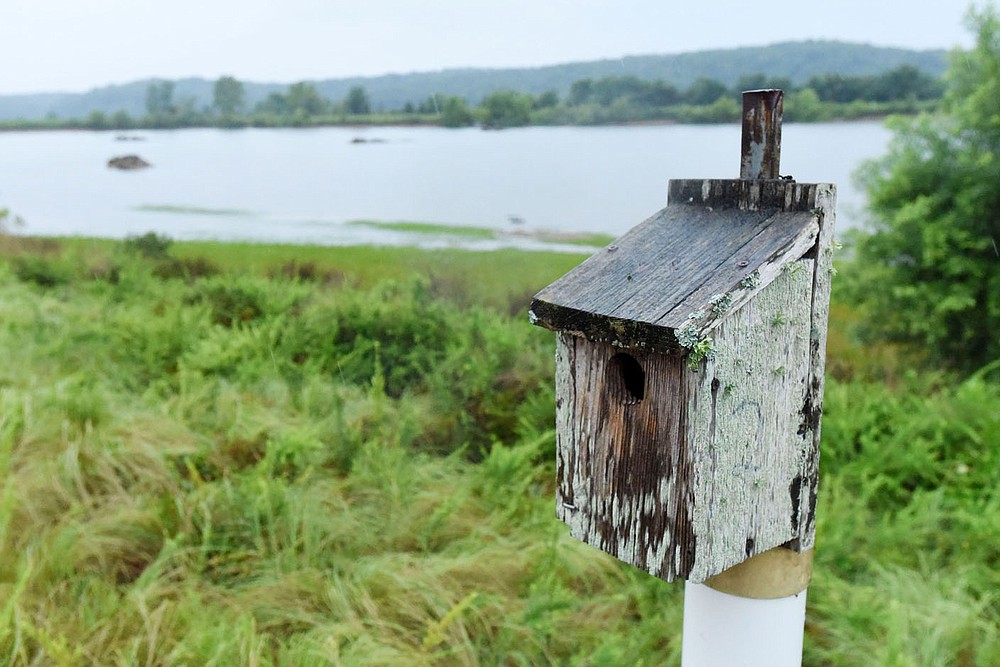 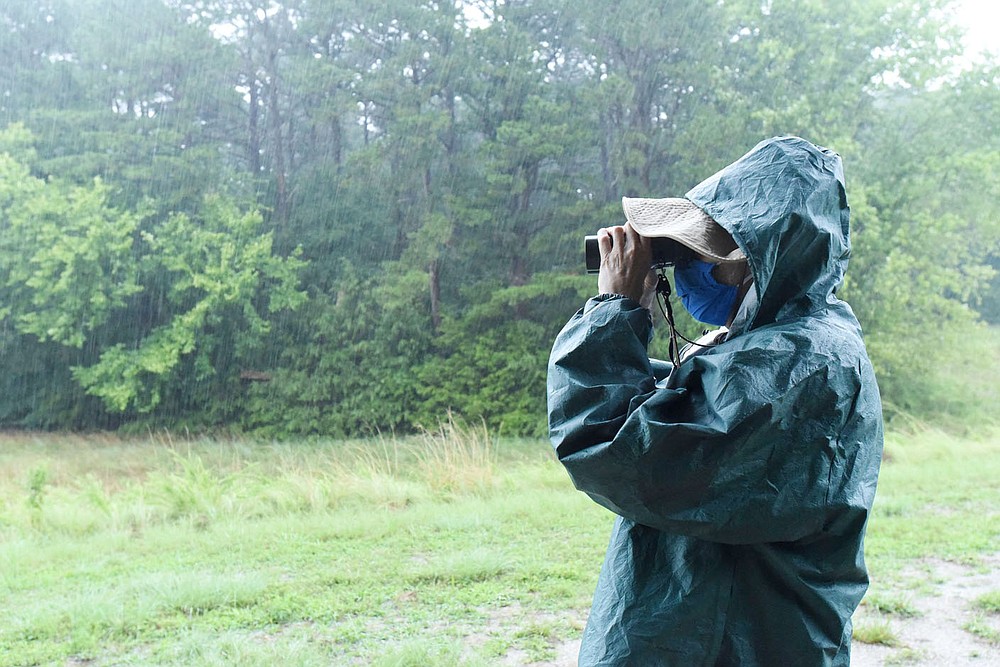 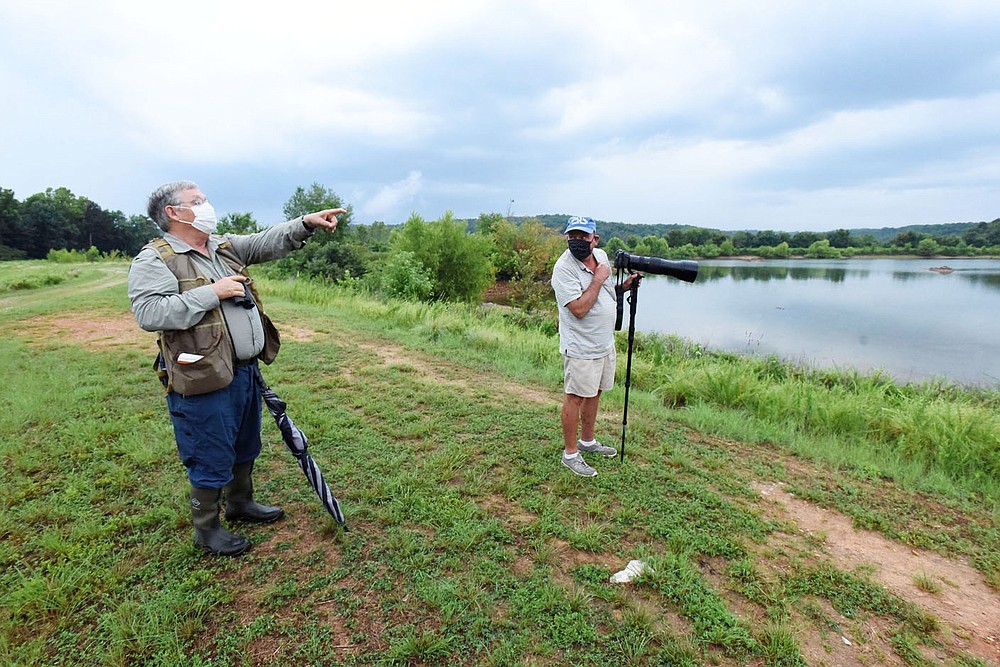 Joe Neal (left) and Terry Stanfill stop during a walk around the pond Aug. 6 2020 to view a variety of birds. (NWA Democrat-Gazette/Flip Putthoff)
More News

The 30-acre pond is located on a 150-acre site east of Rogers. Travel Arkansas 12 east from downtown Rogers for about 10 miles. Turn right on Key Road. Follow Key Road about four miles. The road turns to gravel, then ends at a locked gate. Park at the gate and walk a short distance to the pond.