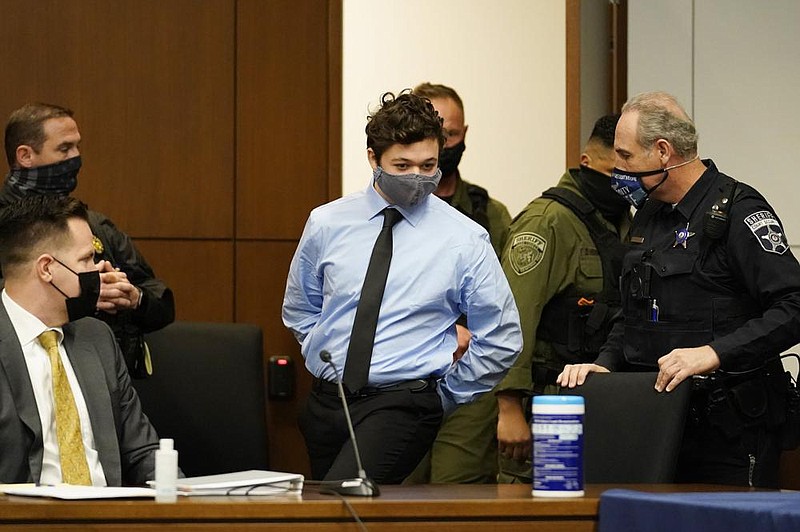 Teen in protest gunfire to be extradited

WAUKEGAN, Ill. -- An Illinois judge Friday ordered a 17-year-old accused of killing two demonstrators in Kenosha, Wis., to be extradited across the border to stand trial on homicide charges, saying it wasn't his role to vet a case filed by Wisconsin protesters and approved by a Wisconsin judge.

"This Illinois court shall not examine any potential political impact a Wisconsin District Attorney potentially considered in his charging decision," Novak wrote.

The shootings happened Aug. 25, two days after a white police officer trying to arrest Jacob Blake shot the 29-year-old Black man seven times in the back, paralyzing him from the waist down. Video of the police shooting sparked public protests.

According to prosecutors and court documents, Rittenhouse is accused of killing 36-year-old Joseph Rosenbaum of Kenosha after Rosenbaum threw a plastic bag at Rittenhouse and tried to wrestle his rifle away.

Video shows that Rittenhouse tripped. As he was on the ground, Anthony Huber, 26, of Silver Lake, hit him with a skateboard and tried to take his rifle. Rittenhouse opened fire, killing Huber and wounding Gaige Grosskreutz of West Allis, who was holding a handgun.

County to fence in Confederate statue

ALBERTVILLE, Ala. -- An Alabama county plans to spend more than $3,000 building a fence to protect a Confederate monument and rebel banner that have been the subject of repeated demonstrations outside the courthouse since summer, the commission chairman said.

The stone marker and battle flag outside the Marshall County Courthouse have been the scene of repeated protests during national demonstrations over the police killing of George Floyd. Opponents want both removed.

Commission chairman James Hutcheson said leaders plan to erect a fence around the monument to protect it and a war memorial outside the building in Albertville. Work will begin within a month, he said, and the fence will cost about $3,500.

Hutcheson said the work has been planned since 2017. "It will have a gate so we will have access to it, and so it's just finishing the renovations and projects at the courthouse," Hutcheson said.

A Confederate heritage group installed the Civil War monument in 1996.

BATON ROUGE -- The federal government will pick up the full cost of 30 days of debris removal and other emergency response activity in Louisiana for Hurricane Laura.

Usually, the state must pay a 25% cost share for the federal assistance.

Cassidy, a Republican running for reelection this fall, said he personally asked Trump for the federal government to cover the costs, rather than asking Louisiana to pay a share.

Laura made landfall in Cameron Parish on Aug. 27, devastating large portions of southwest Louisiana, including the city of Lake Charles. Thousands of residents remain displaced.

BOSTON -- Two former eBay Inc. employees have admitted to their roles in a campaign to terrorize a Massachusetts couple with threatening social media messages and disturbing deliveries of things like live spiders to their home.

Emails seeking comment were sent to their attorneys Friday.

They are among seven former eBay employees charged in the scheme to harass the couple, who authorities said published an online newsletter with articles that were critical of the company.

The scheme also involved pornographic magazines with the husband's name on them sent to their neighbor's house.