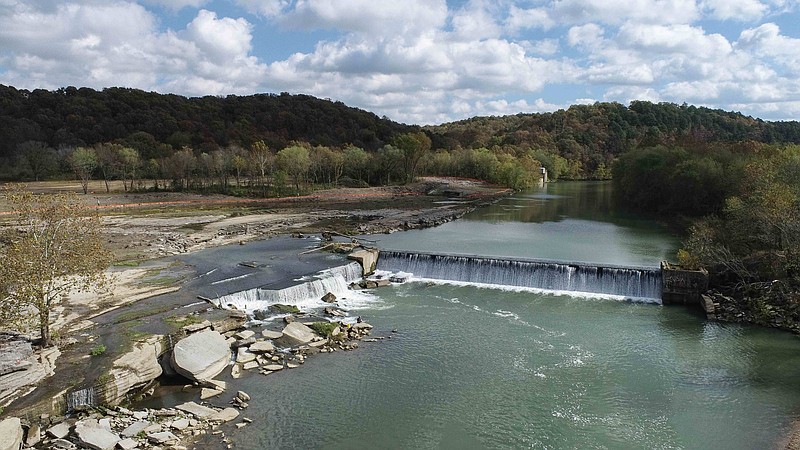 Courtesy photo/WOKA Whitewater Park -- A photo of future location of the 30-acre whitewater park to be built on the Oklahoma-Arkansas border near Siloam Springs. The WOKA Whitewater Park is to host kayaking, surfing, stand-up paddle boarding, tubing and rafting, officials announced Thursday.

The Illinois River park is expected to see 85,000 visitors annually with an estimated annual economic impact of $900,000, according to a press release. Officials from Oklahoma's Grand River Dam Authority and from Siloam Springs announced the park.

The Walton Family Foundation is paying 95% of the $33 million construction cost for the park, according to a fact sheet, which accompanied the announcement.The foundation also provided funding for the design and construction of the park.

The unveiling of plans for the WOKA Whitewater Park coincides with the beginning of construction at the old spillway of Lake Frances on the Illinois River near Watts, Okla., according to a news release. WOKA is a combination of the words water, Oklahoma and Arkansas, according to the fact sheet.

The main attraction will features an approximate 1,200-foot long, 100-foot wide side channel off the river with eight drop-features to provide responsible wave action for kayakers, surfers and tubers of all skill levels, the release stated.

The dam authority will oversee and manage the 30-acre park.

Additional visitor amenities will include waterfront, shaded spectator seating, rental services, parking, trail system, public restrooms, and course put in and take outs. The park fall inside the reservation boundaries of the Cherokee Nation, according to the release.

"Surrounded by the Illinois River and the Ozark Mountains, WOKA perfectly defines the native beauty America's heartland has to offer," said Jim Walton with the Walton Family Foundation. "This national-caliber park will preserve access to nature for generations and unlock economic opportunity by attracting visitors looking for unique outdoor experiences."

Siloam Springs operates another waterpark eight miles upstream, which served as the inspiration for WOKA. In support of the project, the city deeded 17.25 acres to the dam authority from the Siloam Springs Water Resource Company and will further partner to reinforce the existing dam, which supplies water to Siloam Springs from upstream.

"Protecting the city's water supply and enhancing conservation efforts makes this collaboration ideal for the City of Siloam Springs," said Mayor John Mark Turner. "We have experienced the success of drawing visitors to Siloam Springs with our kayak park. Locating a second whitewater park in the region will work in tandem and complement each other to leverage these attractions to the success of both."

Since March 2018, the dam authority has worked with the engineering firm McLaughlin Whitewater Design Group – A Division of Merrick & Company to design the park's land and water features. Crossland Construction Co. was selected as the builder, according to the release.