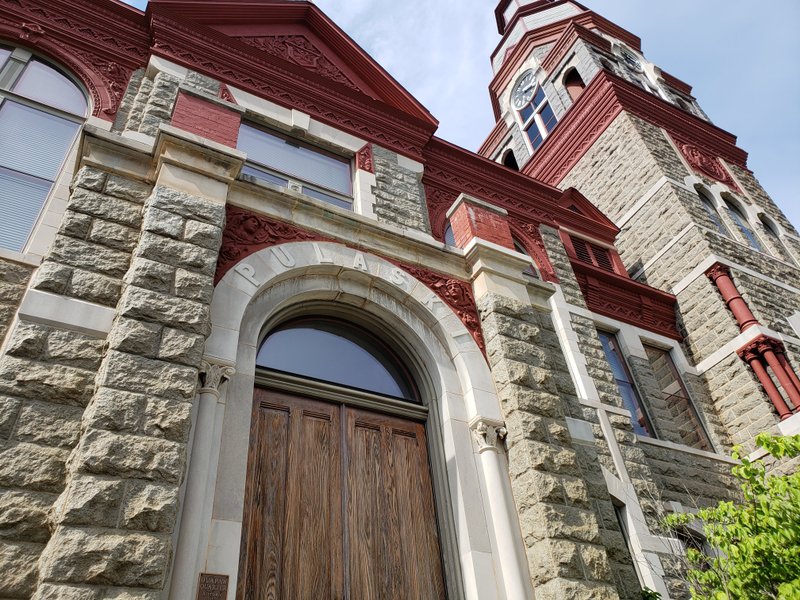 FILE - The Pulaski County courthouse in downtown Little Rock is shown in this 2019 file photo.

A Pulaski County circuit judge ruled Monday that Democrat Jimmie Wilson is ineligible to serve in the state House of Representatives based on the Arkansas Constitution, but stayed parts of his judgment, pending an appeal to the Arkansas Supreme Court.

Wilson is seeking election to the District 12 seat, running against Republican David Tollett. The state Republican Party challenged Wilson's eligibility in an Oct. 15 lawsuit, alleging that his misdemeanor convictions for illegal use of federal farm loans and selling mortgaged crops nearly 30 years ago make him ineligible for office under a 2016 amendment to the state's Constitution barring people who have been convicted of crimes involving "deceit, fraud or false statement."

In a court filing Monday, Judge Mackie Pierce said Wilson was convicted of crimes that disqualify him under Section 9 of the state Constitution from serving in the Arkansas General Assembly.

The court also found that Wilson's eligibility to sit as a representative was not restored by the presidential pardon he received in 2001 from then-President Bill Clinton. Wilson served several terms in the state Legislature in the 1990s.

The GOP also asked that any votes cast for Wilson not be counted. Pierce wrote that in light of attorneys for the Democratic Party stating that they would seek an immediate appeal, he would stay that part of the judgment, as well as the certification of the results of the election while the appeal is heard.

According to state law, the results of an election must be certified to the secretary of state no later than 15 days after the election.

Democratic Party of Arkansas Chairman Michael John Gray confirmed by phone Monday that attorneys for the party will appeal, while the GOP declared victory in a statement from state Republican Chairman Doyle Webb.

"Judge Mackie Pierce was correct in ordering Jimmie Lee Wilson not qualified to serve. The Democratic Party should never have nominated him in the first place, let alone defend him through the court system ... Representative Tollett will serve the citizens of District 12 with integrity in the Arkansas House of Representatives and will stand strong for the values of the Arkansas Delta," Webb said.

Wilson declined to comment on the judgment Monday, saying it would not be prudent to comment on a ruling he had not yet read. He did not attend the hearing due to the risk of covid-19 exposure, he said in a court filing Sunday.

Gray declined Monday to detail what the legal basis for the party's appeal will be, but said the pardon Wilson received in 2001 restored all of his rights as an elector and as a candidate. Wilson has made the same argument in the past.

Wilson has also disputed that the 2016 amendment cited by his opponents can be retroactively applied to his convictions.

George Ritter, an attorney for the GOP, said he was pleased with the judge's ruling, but "the battle's not over yet."

Gray added that though Pierce made the ruling based on the law as he saw it, he believed the judge was influenced by Wilson's absence.

"I don't think, in this time we're in, that should have been a factor," Gray said.

Gray also took issue with the case being heard in Pierce's court rather than by Judge Alice Gray, who had heard a lawsuit filed by Helena-West Helena resident Lisa Ramey that challenged Wilson's candidacy.

Tollett and the state Republican Party later attempted to intervene in that lawsuit, which the judge ultimately dismissed after finding repeated errors in the court filings.

The ruling comes one week into early voting in Arkansas, which began Oct. 19, and a little more than a week before the Nov. 3 election. Gray said Wilson was still campaigning and that the party was hoping for a victory at the ballot box.

Tollett, who was named as a plaintiff in the lawsuit, said he was glad about the judge's decision but was also still campaigning.

"We're happy that the judge ruled in our favor and barring an appeal, I look forward to being a state representative for District 12," Tollett said. "I'm running a campaign to represent every person in District 12, whether they vote for me or not."

House District 12 covers Phillips County and parts of Desha and Arkansas counties. The district has traditionally sent Democrats to the Statehouse. Former state Rep. Chris Richey, D-Helena-West Helena, stepped down earlier this year to take a job in another area of the state, leaving the seat vacant.

If Tollett takes office, he will be the first Republican to represent the district since the Reconstruction era, according to the party's statement Monday.