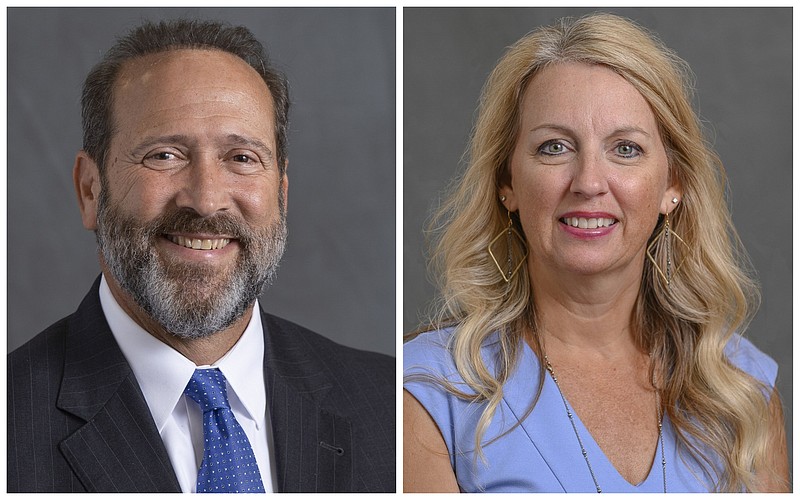 Voters in Pulaski and Perry counties, called on to replace Circuit Judge Chris Piazza in the Nov. 3 election, will choose between Hugh Finkelstein and Casey Tucker.

Piazza, 72, is retiring after 29 years on the bench due to a provision of the law that requires circuit judges who are elected after turning 70 to give up their retirement benefits. Six of the 17 circuit judges in the 6th Judicial District are retiring this year, five of them due to the retirement restriction.

The judges earn $168,096 per year and are elected for six-year terms. The position is formally titled Circuit Judge District 06, Division 02, Subdistrict 6.2, and Piazza's successor as 2nd Division judge will take over a court that focuses mainly on family law.

Due to the provisions of the 1992 Hunt Degree that settled a voting-rights lawsuit, eligible voters are all Perry County residents and Pulaski County residents who live in the northwestern two-thirds of the county. Those voters must live in precincts 1-15, 17-52, 56-115, 121-127 and 136-137.

Both candidates, who answered questions by email, agree that Piazza's successor should come into the job with experience, but disagree on who has the necessary expertise.

Finkelstein, 56, said he's the only candidate who has been a full-time judge who has experience with circuit court.

Finkelstein, twice appointed to be a special Supreme Court justice by Gov. Asa Hutchinson, also was appointed by the governor to serve two years as Little Rock district judge. Both years he held that post, Finkelstein was voted District Judge of the Year by the Pulaski County Bar Association.

Tucker, a family-law attorney recognized as a Top 100 National Trial Lawyer with her own practice, says voters need someone who has had her extensive experience, particularly since so many children are involved.

"Arkansas has the second highest divorce rate in America, so family court is one of the most important courts in Pulaski and Perry counties," she said. "Family court is where children depend on a consistent voice to stop the fighting. It is where divorcing parents deserve clear and timely decisions that solve their problems. I am running for this family court position because it is important to me that we elect judges who have a solid work ethic, proven credentials in the courtroom, and a true heart for service. Family Court is transformative especially to young children, and as your family law judge, I will always put the interests of children first and foremost in every single decision."

Tucker, 48, said if she is elected voters will get a judge with deep ties to the community, describing how she decided to seek the post after receiving encouragement from the late legislator and civil-rights attorney John Walker.

"My roots are southwest Little Rock, and I have resided with my family in our community for most of my life. I have seen changes our local community has experienced over my past 48 years," she said. "I can bring that life experience, local connection, and passion for our community to benefit this family court position. My opponent was appointed to fill the remainder of a lower level court position after working as a career prosecuting attorney in criminal law."

Finkelstein got his start in private practice but said he felt a calling to public service. He spent 18 years as a prosecutor supervisor in Pulaski County. Since 2015, he has been chief deputy prosecutor for the Conway-based 20th Judicial Circuit of Faulkner, Searcy and Van Buren counties.

Importantly, Finkelstein said he knows what it's like to be a litigant in court, fighting to hold a family together.

"I have been one of those people sitting in court and praying that the judge would make the right decision that would affect my life forever," he said. "[H]aving been a client, rather than just an attorney, gave me a different perspective about how it feels to be a party in a case. I know how scared and frustrated people can get going through these cases because they have a permanent effect on many lives. My very personal understanding of this has made me a better lawyer, parent and definitely a better judge."

Finkelstein said he had to go to trial -- "a heart wrenching day" -- to get custody of his wife's 14-year-old daughter after Kim Finkelstein died in 2008. She had provided in her will for him to raise the girl. He said he also knows what it's like to share a child with a former partner following a divorce.

"My former spouse and her husband are both on my list of attorney supporters, and my current spouse and I value their relationship and friendship," he said. "This has given me a greater appreciation of the necessity of parents setting aside their own differences and working together for the best interests of their children."

Finkelstein and Tucker are in a runoff for the post after neither captured the required majority vote in the March election. Finkelstein received 38% of the vote in that contest, Tucker garnered about 33%, with Little Rock attorney Scott Richardson receiving 29% of the balloting.

Tucker said the difference in votes was negligible, given there were three candidates. Supported by numerous pastors, community leaders and former clients, she said she expects the November election to bring many new voters to the polls.

"The result was separated by only a few percentage points. This is an entirely new election that will be decided by people who did not vote in the primary," Tucker said. "In the general election, there have already been nearly as many people who early voted than the total number who cast their vote in the primary. I see long lines to vote, I witness tremendous excitement, and I work hard every day to earn their vote."

Finkelstein, who has been endorsed by more than 700 lawyers and all of the police unions in Pulaski County, said the covid-19 pandemic has made voter outreach difficult, forcing him to rely more on the internet.

"I was truly humbled to receive the largest share of votes in my race in March. My supporters are people I have encountered throughout my legal career, teaching at both the UALR law school and college, church family, tennis community and friendships," he said. "Although the COVID crisis has made us less able to see each other in person, it has allowed us to initiate and maintain relationships in new ways."

According to the latest figures available from Arkansas' secretary of state, Finkelstein is outearning and outspending Tucker.