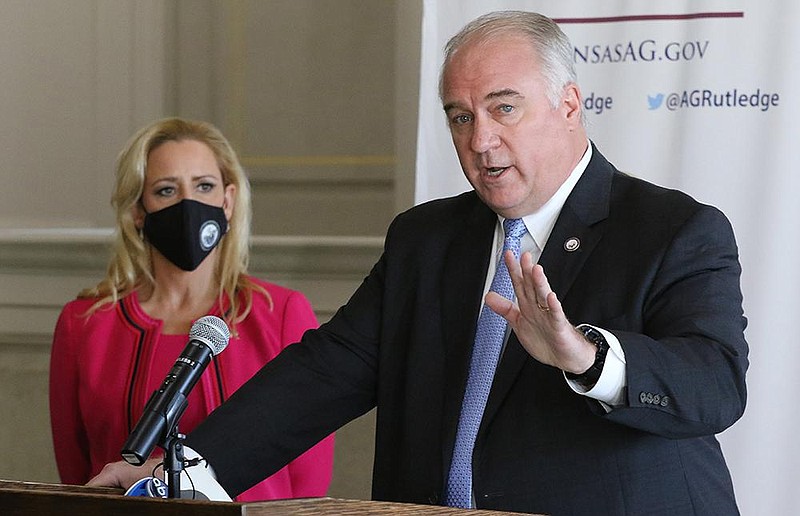 Much of the money owed by Preferred Family Healthcare — $4.6 million — stems from a federal whistleblower claim filed by one of the firm’s former mental health professionals in early 2018, newly unsealed court records show. The remaining $1.9 million is due to Arkansas under the state’s false claims law.

The announcement “ensures Arkansans that the Arkansas Medicaid program was made whole after this wrong and illegal act,” Rutledge said at a news conference.

The state’s settlement closes the book on its four-year investigation into the company itself, though criminal cases lodged by Rutledge’s office against two former Preferred Family workers accused in an improper billing scheme have not yet been resolved.

Preferred Family Healthcare sold its Arkansas assets in 2018 to a Hot Springs nonprofit after the state suspended its Medicaid payments because of “credible” fraud allegations. Its operations continue in Missouri, Illinois, Kansas and Oklahoma.

Aside from an investigation into its billing practices, the company was at the heart of a federal public corruption case involving former Arkansas lawmakers — including the governor’s nephew, former Sen. Jeremy Hutchinson of Little Rock.

The married couple who ran Preferred Family for years, Tom and Bontiea Goss, are scheduled to go to trial next spring on more than 20 federal charges each.

Two other former executives, as well as Hutchinson and the company’s ex-lobbyist Milton “Rusty” Cranford, are among several connected to the company who have pleaded guilty in the sprawling case.

The settlements announced Thursday did not surface any new criminal charges, nor did the accusations involve politicians.

Deputy Attorney General Lloyd Warford, who heads Rutledge’s team investigating Medicaid fraud, said Thursday that his “opinion and observation” is that the criminal cases are winding down.

“I can’t speak for the federal authorities,” Warford said. “I don’t know what they may have learned from witnesses … so I can’t say for sure. It seems like we’re sort of starting to reach the end of those cases.”

Many of the illicit billing tactics alleged by the whistleblower have previously been described in criminal cases that Rutledge’s office brought against a trio of former Preferred Family workers, including ex-executive vice president Robin Raveendran.

An Arkansas Democrat-Gazette investigation in 2018 found that Preferred Family and its subsidiaries received $245 million in Medicaid payments for mental health services from fiscal 2011-18, a third more than the second-ranking provider in that span.

At its peak in 2016, Preferred Family collected $43.9 million from the state’s Medicaid-funded mental health program — one in every seven dollars the program spent that year.

The newspaper also reported that the company’s Medicaid funding increased even as the number of individual clients it saw each year declined.

A statement Thursday from Preferred Family says the company was able to avoid “the potential expense of protracted litigation” and blamed the wrongdoing on “former employees and executives” of the company.

Preferred Family “prepared accordingly for the possibility” of the settlements to “ensure there are no long-term effects on the financial position or business plan,” the statement says.

Thursday’s announcement did reveal publicly for the first time a so-called qui tam lawsuit filed against Preferred Family Healthcare by one of its former employees, a mental health professional named Frances Smith of Salem in north-central Arkansas.

Whistleblowers who initiate such lawsuits, which can remain under court seal for years, are eligible to share in monetary judgments. The U.S. attorney’s office in Little Rock informed the court early this month that it was pursuing some of the claims Smith made.

Her lawsuit was responsible for about 70% of the $6.5 million in joint settlements announced Thursday.

Because she filed a successful qui tam claim, Smith could be eligible for between 15% and 25% of the $4.6 million federal settlement, according to provisions in the U.S. False Claims Act, which dates back to the Civil War.

Specifics in her case have not yet been publicly disclosed, and attempts to reach Smith’s attorneys were unsuccessful.

Smith worked at the company’s division called Health Resources of Arkansas from November 2014 to October 2017 and witnessed multiple cases of fraud by her colleagues, according to the complaint. She was a licensed professional counselor at the time of her termination in 2017, something she described as retaliatory for speaking out.

Among the allegations is that Smith witnessed a fellow mental health professional using her cellphone while clients watched the Pixar film “Cars” in what was billed to Medicaid as a “group therapy” session in 2016, according to the complaint.

Smith also accused the firm of knowingly submitting false claims that resulted in overpayments from Medicaid, Medicare and a government program that pays for mental health services for some military veterans’ family members.

Preferred Family’s settlement with the U.S. Department of Justice had not been filed in court as of Thursday evening.

The company said it also agreed to a “corporate integrity agreement” with the U.S. Department of Health and Human Services’ Office of Inspector General.

Such agreements typically require providers to take on extra obligations — such as establishing a confidential disclosure program and providing annual compliance reports — in exchange for the office not seeking to exclude providers from participating in Medicaid and Medicare programs, according to the inspector general’s website.

The state’s settlement agreement with Preferred Family says it “represents the full and final resolution of any potential civil or criminal claims against [the company] handled by” Rutledge’s Medicaid fraud team.

The $1.9 million sum includes $1.5 million in damages owed to the state’s Medicaid program and $400,000 to Rutledge’s office to cover costs of the four-year investigation, the agreement says. The lesser amount will fund future Medicaid fraud investigations, according to the settlement.

Some of the $1.9 million will be refunded to the federal government, which covers a portion of the state’s Medicaid costs.

The state’s Medicaid fraud investigation of Preferred Family has focused on allegations that workers responsible for billing the taxpayer-funded program found a loophole in the system that allowed the company to cash in.

Medicaid is the state and federally funded insurance program for low-income residents and children, and it is supposed to be the “payor of last resort.” Medicare is the federal program for the elderly and disabled.

Some beneficiaries qualify for both programs, which have different rules, including what types of services are allowed and what credentials providers must have to administer the services. Medicare has more rigorous standards, including tighter staff licensing requirements.

Software used by Preferred Family was designed to reject Medicaid claims for dual-eligible beneficiaries unless the billing clerk documented that Medicare had already been tried, court documents say.

Vicki Chisam, a former Preferred Family billing clerk, found a way to bill Medicaid without first trying Medicare and then told others how to do it, including then-executive vice president Raveendran, according to her July 2019 guilty plea to felony conspiracy.

Although the settlement agreement closes the state’s case against Preferred Family, it “shall have no bearing on the criminal prosecution” of Raveendran and Balding, it says.

The company’s settlement means Raveendran and Balding would not bear any direct responsibility for restitution owed to the state should they be convicted of Medicaid fraud charges, according to Warford, head of Rutledge’s investigative unit. That’s because the company has now agreed to repay the money.