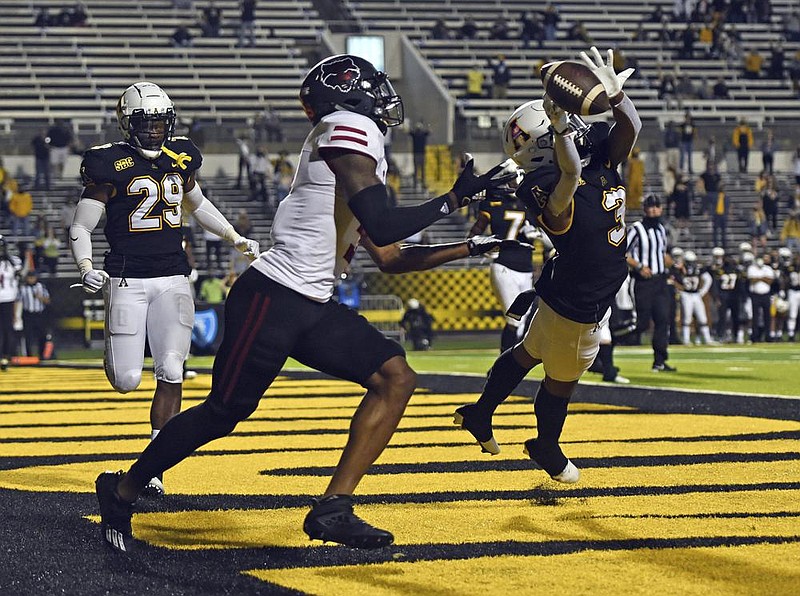 Appalachian State defensive back Shaun Jolly (right) breaks up a pass in the end zone intended for Arkansas State University receiver Jonathan Adams Jr. during the Mountaineers’ 45-17 victory over the Red Wolves on Thursday in Boone, N.C. (AP/Winston-Salem Journal/Walt Unks)

Those three plays -- all within a five-minute span in the second quarter -- put Arkansas State University (3-3) in too big of a hole, in a 45-17 loss Thursday night to Appalachian State (3-1) in Boone, N.C.

The only bright spot for the Red Wolves was senior wide receiver Jonathan Adams Jr., who had his third-consecutive 100-yard receiving game catching 6 passes for 134 yards. Other than that, ASU struggled on both sides of the ball.

"It's depressing, us getting embarrassed like that on national TV," Adams said. "I don't think they're 30 points, or whatever the score was, better than us. But they beat us. They made few mistakes and we made a lot of mistakes."

Quarterbacks Logan Bonner and Layne Hatcher weren't able to repeat their impressive seven-touchdown performance from a week ago, going a combined 22-of-42 for 295 yards and an interception. But Arkansas State's run game was almost completely absent, rushing 35 times for just 73 yards.

And in the defense's first game following the firing of defensive coordinator David Duggan, the Red Wolves showed promise at times forcing two turnovers and three punts, but it wasn't nearly enough as Appalachian State still totaled 515 yards. The Mountaineers also dominated on third downs, converting 10 of 15 and holding ASU to 4 of 16.

"We can't have that kind of night offensively and definitely not against a good team," Coach Blake Anderson said. "Defensively, I'm proud of how they created the turnovers, but we didn't make them punt one time in the first half and that makes it tough."

Arkansas State looked to keep pace early, responding to Appalachian State's first touchdown with a score of its own on senior running back Jamal Jones' 8-yard rush. But those would be the only points the Red Wolves would score in the first half, while the Mountaineers scored touchdowns on their first three possessions.

Arkansas State tried to dial up a trick play when sophomore wide receiver Jeff Foreman attempted to connect with junior tight end Reed Tyler, but threw into triple coverage and was subsequently intercepted. On Appalachian State's next play, junior safety Antonio Fletcher gave ASU the ball right back with his own interception. The Red Wolves weren't able to capitalize, failing to score as junior kicker Blake Grupe missed a 24-yard field goal.

On ASU's next possession, still trailing 21-7 and following another forced turnover by ASU's defense, the Red Wolves attempted a fake punt from their own 27 that had no chance and eventually led to an Appalachian State field goal. The Mountaineers added another touchdown right before the half, taking a commanding 31-7 lead into the locker room.

ASU added its second field goal of the game to cut it to a 21-point game to start the third quarter. After a couple of defensive stops, the Red Wolves finally capitalized on offense, as freshman running back Lincoln Pare broke off a 48-yard touchdown run to make it 31-17 with 2:08 left in the third quarter. Appalachian State quarterback Zac Thomas -- the preseason Sun Belt Player of the Year -- then made the back-breaking play of game, scoring on a 60-yard run on third and 14 to take a 38-17 lead into the final quarter.

"They caught us in a coverage that makes us really shorthanded in the box," Anderson said of the play. "It's one of those that we'd like to have back."

Hatcher threw an interception in the back of the end zone to start the fourth quarter, which eventually sealed the Red Wolves' fate as the Mountaineers turned it into a touchdown minutes later, taking a 45-17 lead with 8:22 to go.

Arkansas State will be back in Jonesboro at 2 p.m. Oct. 31 against Troy. ASU has yet to play a division game in the Sun Belt, meaning that despite losses to Appalachian State and Coastal Carolina, there's still hope of making the conference title game.

"It's a group of guys that are willing to keep competing and keep fighting," Anderson said when asked where his team is mentally halfway through the season. "We're fortunate that we're in a position where we do still control our own destiny, but we're going to have to play better ball or that's not really going to matter."