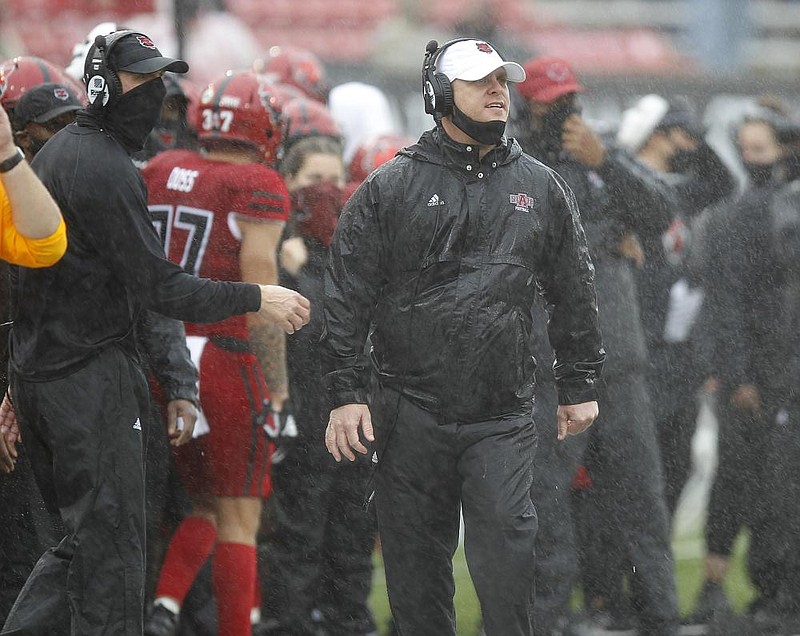 JONESBORO -- Where did it go wrong?

Duggan and Pinkham were in just their second seasons on staff, having overseen a defense that finished 124th in total defense in 2019 and currently ranks 70th out of 76 teams this season. Anderson said his decision to move on from Duggan and Pinkham was one he started thinking about late Thursday night and came to the conclusion on early Friday.

"You don't make those decisions lightly. It was not based off one game, by any means," Anderson said. "And I've been thinking it through, praying it through, how to move forward defensively in general -- whether that's adjustments or tweaks. Ultimately, when you talk about trying to spark that side of the ball, at some point staff changes have to be a part of that thought process."

Duggan and Pinkham came to Jonesboro hoping to build off former defensive coordinator Joe Cauthen's success. In their first season, they had to change schemes halfway through due to an abundance of injuries. This season, the team just never looked comfortable, giving up 500 total yards in three of their five games.

So what happened? Why didn't it work?

"For whatever reason, it just didn't click," Anderson said. "David Duggan is a phenomenal football coach, and so is Ed Pinkham. This has nothing to do with their ability at all. They're great ball coaches, it just didn't fit in that particular room.

"There's just a chemistry or a connection that we never could get going defensively. It just wasn't working here. He knew it. I knew it. We both knew there was something missing, and we really couldn't put our finger on it.

"It wasn't moving in the direction we wanted. And like I said, every player and every other coach, including myself, we all carry some responsibility. But ultimately, to make it move in the direction we needed to, there were very few options to get that done, and I just felt like this was the right option, and waiting four weeks or five weeks or six weeks to do it was only going to make matters worse.

"To be fair to everybody, this felt like something I had to do and put my personal feelings aside of how much I care about the guy. It just had to be done."

Anderson said he told the players about his decision Friday evening at a team meeting.

"They reacted honestly very, very well," Anderson said. "It's just not what anybody wants to go through, and I think they had tremendous respect for both those guys. But at the same time, they feel like we're struggling and felt like there was just something missing. If [Sunday]'s meeting and [Sunday]'s practice is any indication, than they're taking the right approach to it."

"He's a fiery, competitive guy," Anderson said. "He communicates really, really well, high energy. The guys seem to respond to him very well. He's been involved in all the special teams phases, and so he's always been up in front of the entire group, not just his position. Those are the things I think you'll see come out of him and our defense."

As far as schematic changes, Anderson doesn't believe there will be any. He said there will be an attitude change, which he believes is one of the biggest changes needed along with cutting down on mental mistakes.

"Any time you put somebody else in the play-calling category, you're going to see subtle changes," Anderson said. "We've got the scheme we've got. This is what we've got. This is what we're built for. The scheme works. A lot of people run this scheme across the country, including the people on the other side of the state that are having a lot of success with it right now.

Anderson's defensive changes will be challenged rather quickly, with Arkansas State having to face defending Sun Belt Conference champion Appalachian State on Thursday in Boone, N.C.

But Anderson is confident in his group. He likes his defensive players, saying he believes they're some of the most talented in the conference. Now it's on them, and himself, to decide how they will respond to the adversity.

"Never something I wanted to do. Just felt like ultimately it was really the only decision here in this particular position," Anderson said. "And I do think it's up to the group, the staff and the players in terms of where it takes us. It can be an excuse that we make or it can be the catalyst that sparks us and we can play lights out.

"The guys in the room, their accountability has to raise. It's got to be more heightened. If they do that, we have the ability to improve and this has a chance to be a spark -- no doubt."