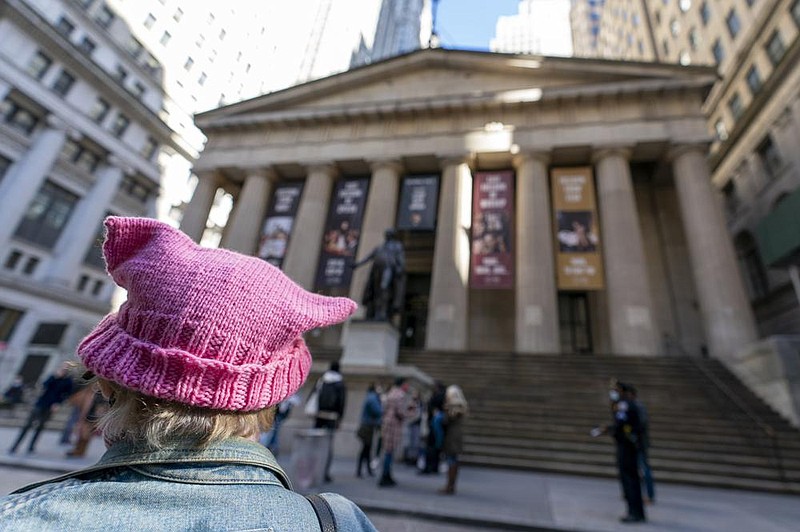 A demonstrator takes part in a Women’s March on Saturday outside the Federal Hall in New York. (AP/Mary Altaffer)

WASHINGTON -- Wearing costumes and carrying signs, thousands of people gathered for the Women's March in downtown Washington and in cities across the country Saturday.

Women wore white lace collars and black robes to honor the late Justice Ruth Bader Ginsburg, and red robes and white bonnets to mock the woman expected to take her seat. Some faced off in a tense confrontation with a group of counterprotesters at the Supreme Court who had come to support Amy Coney Barrett and oppose abortion, yelling, "Keep your laws off my body!"

Ginger Belmonte, 23, said she has come from her home in Frederick County, Md., to Washington every weekend since Ginsburg died.

"Every weekend, the signs are getting a little more hostile and darker," she said.

The child-care provider said this year's march feels even more urgent than the first one, after President Donald Trump's inauguration.

"We didn't know the severity of how bad it was going to be," she said. Now, especially with the new makeup of the Supreme Court, "it's actually happening."

[Video not showing up above? Click here to view » https://www.youtube.com/watch?v=BskDBSOuyx0]

Women's March leaders hoped to bring a final show of force before Nov. 3 with a rally in the nation's capital and in more than 429 marches across all 50 states.

In Houston, Chicago, New York, San Diego and other cities across the nation, people posted photos of events, most with people wearing masks and standing at a distance in an attempt to gather safely despite the coronavirus pandemic.

Organizers had discouraged participants from traveling to D.C. from states that are on the self-quarantine list, encouraging them to attend local marches or to get involved with its text-a-thon efforts to get out the vote. Still, some drove from New Jersey, West Virginia, Florida, New York and other states to be at the epicenter of power.

The march took place days before the Senate holds its first vote to confirm Barrett to replace Ginsburg, a liberal leader and feminist icon. The Senate Judiciary Committee is scheduled to vote Thursday on the nomination of Barrett, who would cement the conservative advantage on the court. The Republican majority is expected to approve the nomination.

Tensions over the nomination came to a head outside the Supreme Court on Saturday afternoon, as marchers confronted several dozen counterprotesters who were chanting Barrett's "ACB" and holding antiabortion posters. They were quickly drowned out by the several thousand Women's March attendees, who countered by yelling, "RBG" and "My body, my choice."

"We have the votes!" Students for Life protesters chanted, holding up signs with pictures of fetuses with messages such as "She could be Audrey," "She could be Oprah" and "She could be Alexandria." A Women's March volunteer stood between the two groups, keeping them separated, but many young women held heated one-on-one debates, sparring about abortion, birth control and health care.

A woman spray-painted two of the antiabortion protesters' signs, while others nearby got into a shouting match.

Katelyn Fitzgerald, 20, was among the line of young people wearing blue shirts from Students For Life. "I wanted to show that I can be pro-woman and pro-life," said Fitzgerald, who is a student at Liberty University. "It's not an oxymoron."

"You can use social media all you want, but there's something to be said about showing up," said Justina Gilliam, 40, who said she had attended every Women's March in Washington.

Several District of Columbia streets prohibited parking, while others closed Saturday for the events.

At the most recent Women's March in January, some attendees said they hoped they wouldn't need to march again following the 2020 election.

The group's organizers quickly planned hundreds of marches, both virtual and in-person, focused primarily on voting rights and the Supreme Court confirmation process.

The first march was remarkable, but the real impact was what followed, said Carmona. She said the movement had helped motivate women to run for office in record numbers in the midterms. 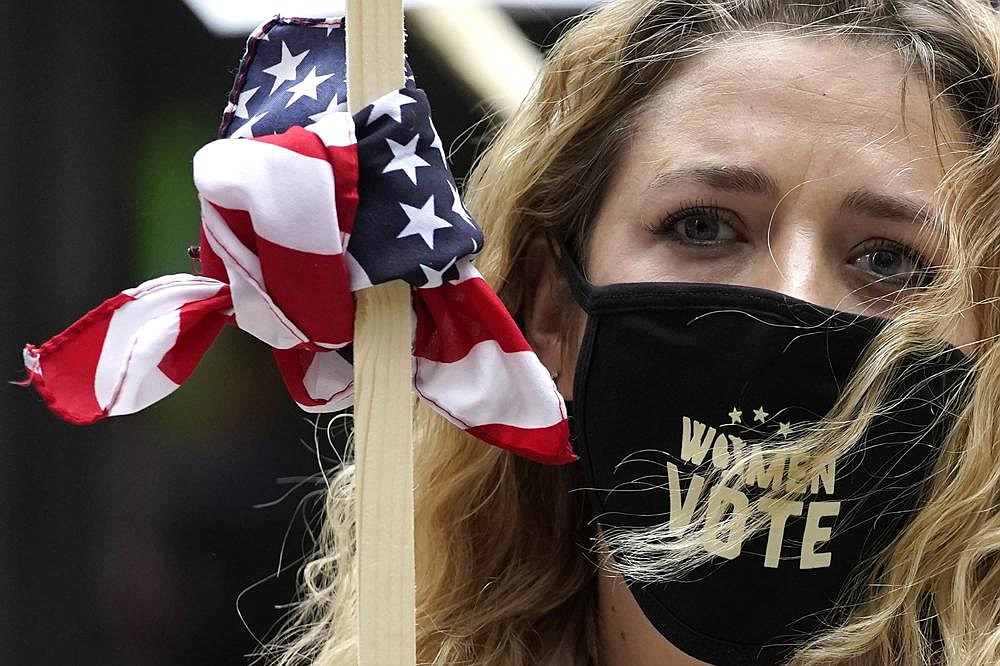 Lindsey Schwartz takes part in a Women’s March on Saturday in downtown Chicago. It was one of dozens held across the country, from New York to San Francisco, to signal opposition to President Donald Trump and his policies, including the push to fill the seat of late Supreme Court Justice Ruth Bader Ginsburg before Election Day. More photos at arkansasonline.com/1018marches/. (AP/Nam Y. Huh) 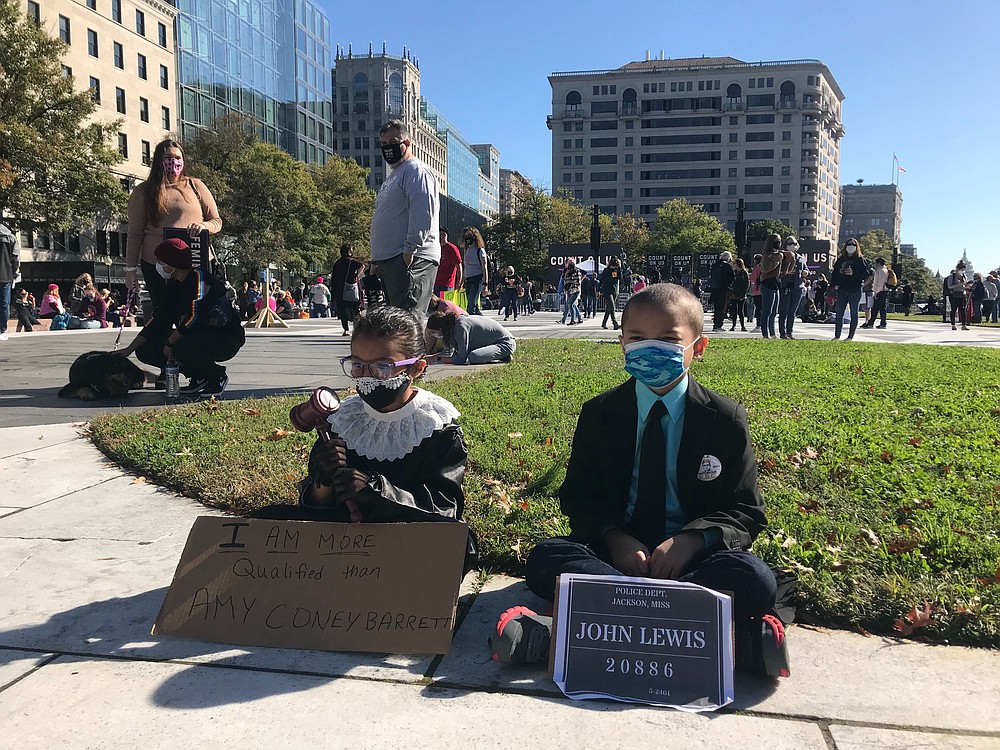 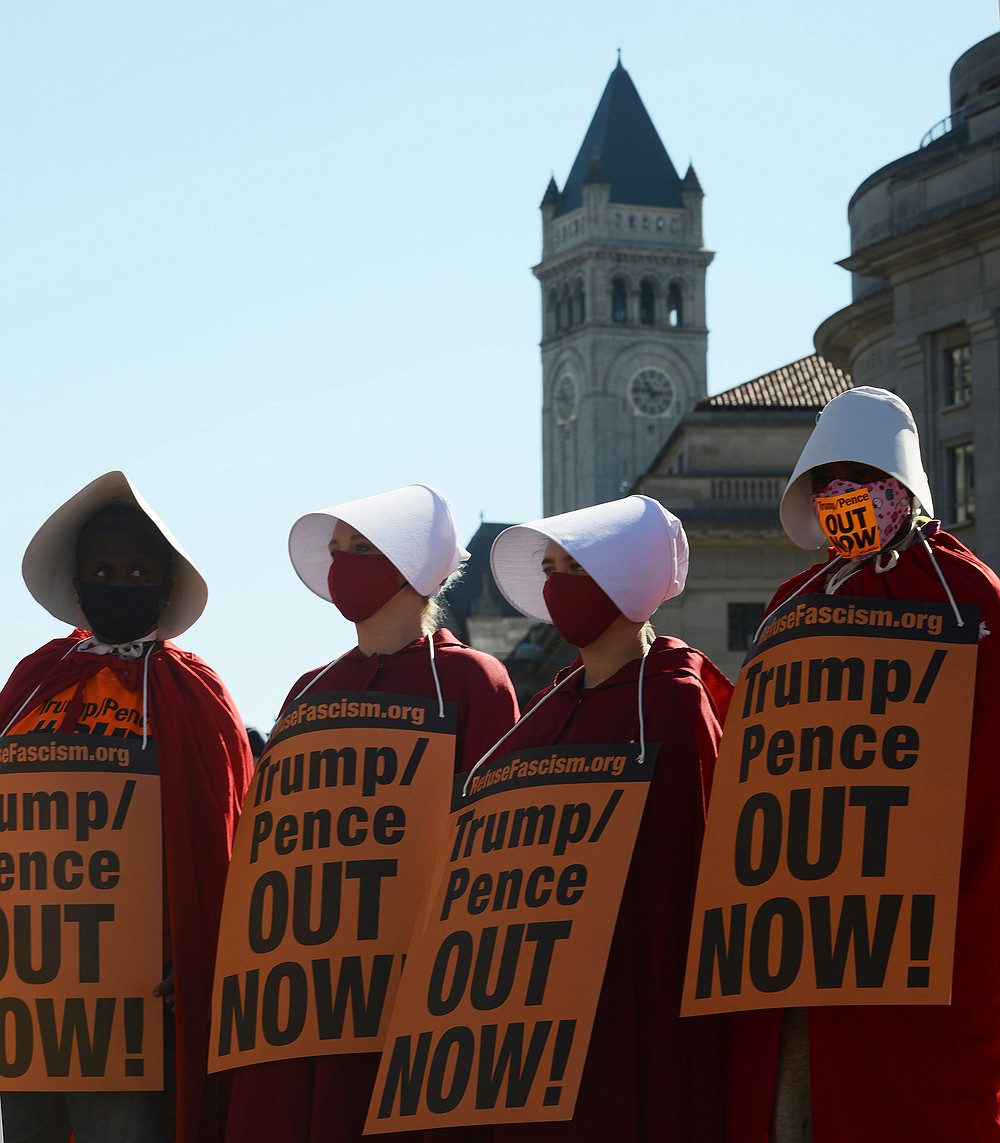