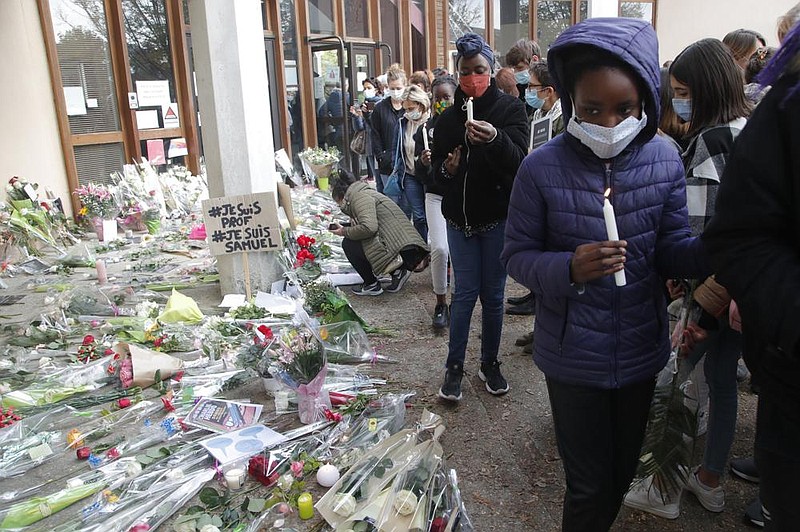 Killer of teacher a refugee in France

PARIS -- A man shot dead by police after the beheading of a history teacher near Paris was an 18-year-old Chechen refugee unknown to intelligence services who posted a grisly claim of responsibility on social media minutes after the attack, officials said Saturday.

[Video not showing up above? Click here to view » https://www.youtube.com/watch?v=xlJHuhysxFU]

Paty had discussed caricatures of Islam's Prophet Muhammad with his class, leading to threats, police officials said. Islam prohibits images of the prophet, asserting that they lead to idolatry. The officials could not be named because they were not authorized to discuss ongoing investigations.

French anti-terrorism prosecutor Jean-Francois Ricard said an investigation in the case related to terrorism had been opened.

Ricard told reporters that the Moscow-born man, who had been granted a 10-year residency in France as a refugee in March, was armed with a knife and an airsoft gun that fires plastic pellets.

His half sister joined the Islamic State group in Syria in 2014, Ricard said. He didn't give her name, and it is not clear where she is now.

The prosecutor said a text claiming responsibility and a photograph of the victim were found on the killer's phone. He also confirmed that a Twitter account under the name Abdoulakh A belonged to the man. It posted a photo of the decapitated head minutes after the attack along with the message "I have executed one of the dogs from hell who dared to put Muhammad down."

Mourners marched near the school in solidarity Saturday.

HONG KONG -- The Standing Committee of China's congress on Saturday passed amendments to a law that will criminalize the intentional insulting of the national flag and emblem, after anti-government protesters in Hong Kong last year desecrated the Chinese flag.

According to the newly amended National Flag and National Emblem Law, which will take effect on Jan. 1, those who intentionally burn, mutilate, paint, deface or trample the flag and emblem in public will be investigated for criminal responsibility.

The law also states that the national flag must not be discarded, displayed upside down or used in any manner that impairs the dignity of the flag.

The revised law also will apply to offices in Hong Kong and Macao that are set up by the central government.

ROME -- Pope Francis on Saturday permanently removed a Polish bishop who was kicked out of his diocese a few months ago pending a Vatican investigation into allegations that he covered up cases of sexual abuse by his priests.

The resignation of Edward Janiak as bishop of Kalisz suggests the Vatican was able to substantiate at least some elements of the accusations made in a documentary about sex abuse in Poland that has undermined the country's influential Catholic hierarchy.

Francis on Saturday accepted Janiak's resignation and confirmed the archbishop of Lodz, Grzegorz Rys, as the diocese's temporary administrator. At 68, Janiak is well below the normal retirement age of 75 for bishops.

Francis in June had ordered Janiak to leave Kalisz and forbade him from having any influence on how the diocese is run pending the investigation.

In May, the online documentary "Playing Hide and Seek" exposed two cases of pedophile priests that Janiak handled, first as an auxiliary bishop of Wroclaw and then as bishop of Kalisz, which he had headed since 2012.

Belarusians yell 'go away,' get arrested

KYIV, Ukraine -- Police in Belarus on Saturday detained scores of demonstrators pushing for the resignation of President Alexander Lukashenko, the country's authoritarian leader of 26 years, after an August election widely seen as manipulated.

Hundreds of students marched across the capital, chanting "go away." They were blocked by police, who rounded up some and forced others to disperse.

[Video not showing up above? Click here to view » https://www.youtube.com/watch?v=hI_YN4LNCr4]

Later in the day, hundreds of women, some holding white-and-red umbrellas in the colors of the opposition flag, staged their regular weekend march across the capital, Minsk. "You sang your song, it's time to get off the stage!" one placard read.

The Viasna human-rights center said more than 30 demonstrators were detained.

Daily protests have occurred since the Aug. 9 election in which Lukashenko was declared the winner with 80% of the vote. The European Union and the United States denounced the vote as neither free nor fair and introduced sanctions against top Belarusian officials 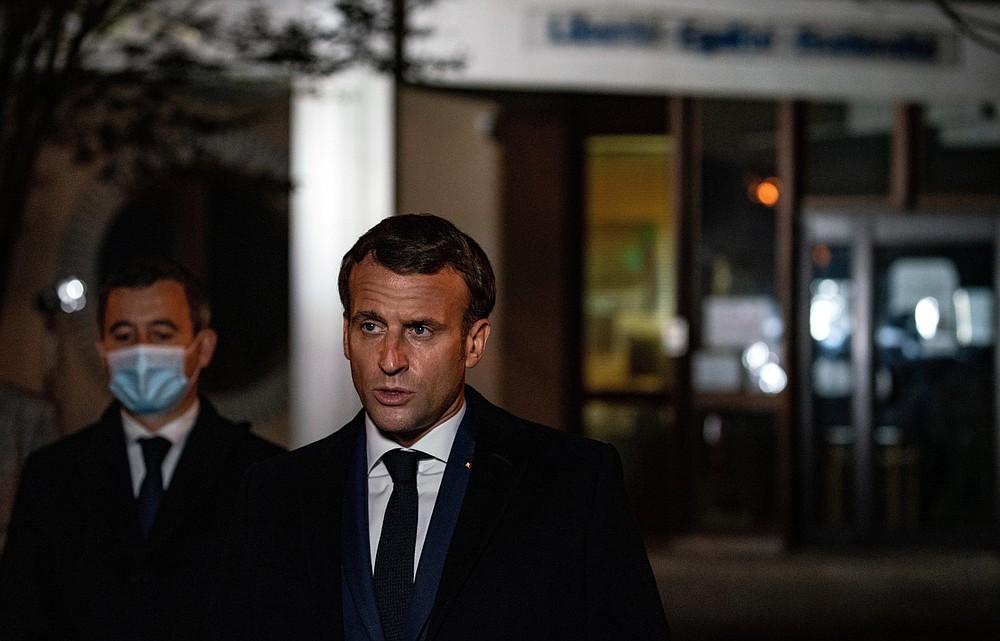 French President Emmanuel Macron speaks in front of a high school Friday Oct.16, 2020 in Conflans Sainte-Honorine, northwest of Paris, where a history teacher who opened a discussion with high school students on caricatures of Islam's Prophet Muhammad was beheaded. French President Emmanuel Macron denounced what he called an "Islamist terrorist attack" against a history teacher decapitated in a Paris suburb Friday, urging the nation to stand united against extremism. (Abdulmonam Eassa, Pool via AP) 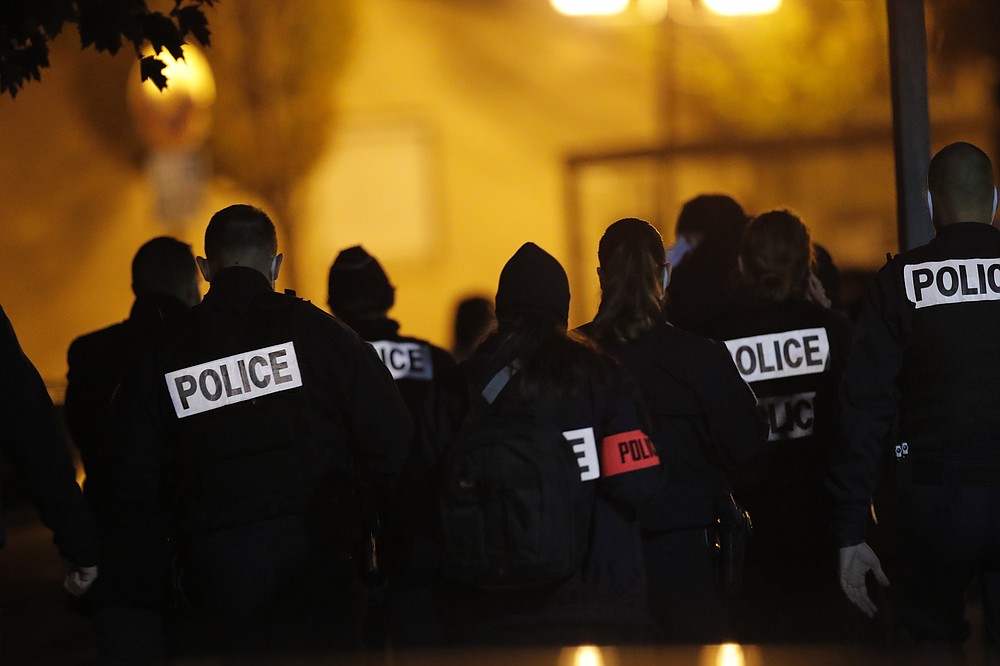 French police officers gather outside a high school after a history teacher who opened a discussion with students on caricatures of Islam's Prophet Muhammad was beheaded, Friday, Oct. 16, 2020 in Conflans-Saint-Honorine, north of Paris. Police have shot the suspected killer dead. (AP Photo/Michel Euler) 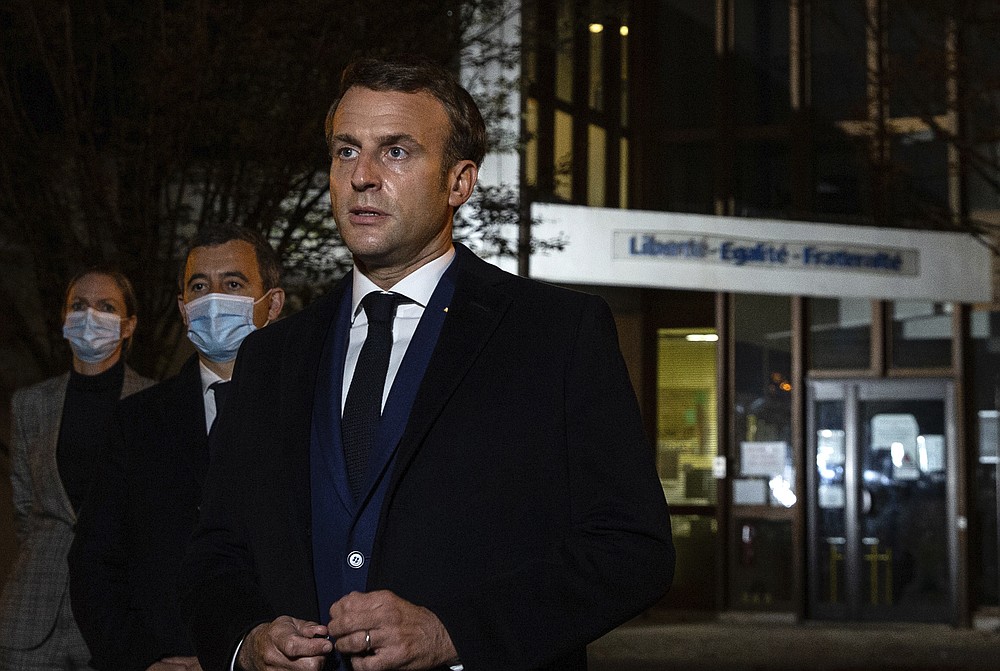 French President Emmanuel Macron, flanked by French Interior Minister Gerald Darmanin, second left, speaks in front of a high school Friday Oct.16, 2020 in Conflans Sainte-Honorine, northwest of Paris, after a history teacher who opened a discussion with high school students on caricatures of Islam's Prophet Muhammad was beheaded. French President Emmanuel Macron denounced what he called an "Islamist terrorist attack" against a history teacher decapitated in a Paris suburb Friday, urging the nation to stand united against extremism. (Abdulmonam Eassa, Pool via AP) 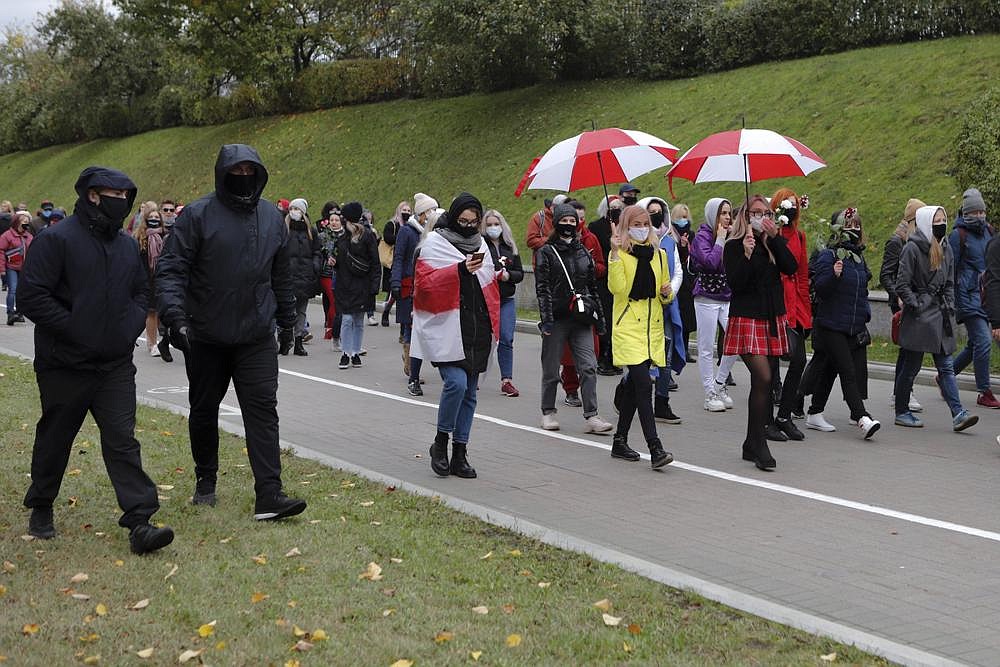