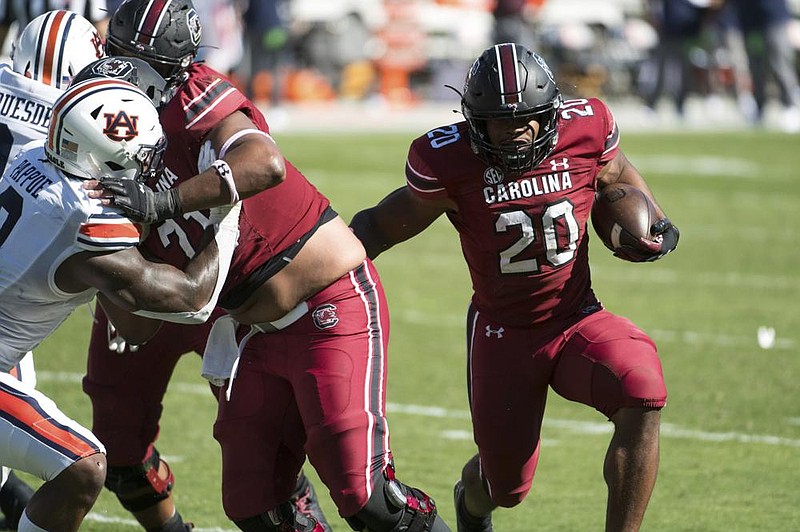 South Carolina running back Kevin Harris (20) eludes the Auburn defense Saturday to score a touchdown during the Gamecocks’30-22 victory over the No. 15 Tigers in Columbia, S.C. (AP/Sean Rayford)

COLUMBIA, S.C. -- South Carolina's Jaycee Horn was tired of hearing he didn't have the skills to be a truly exceptional cornerback.

His play against No. 15 Auburn proved he did -- and led the Gamecocks to a breakthrough victory over the Tigers on Saturday.

Horn had the first two interceptions of his career and his break-up led to a third -- all which South Carolina turned into touchdowns -- for a 30-22 victory that was its first win over Auburn in 87 years.

Horn is a junior who's been a lockdown corner most of his career.

Horn was assigned to Auburn receiver Seth Williams, one of the best receivers in the SEC who is averaging 18 yards a catch. Williams finished with four catches for 74 yards, but no scores.

"I heard a lot of people saying I [don't] have any ball skills, which is crazy to me," Horn said. "I just knew the day would come when I'd have a lot of opportunities to make plays."

South Carolina made plenty of them throughout on Saturday.

Kevin Harris ran for two touchdowns, Smith added a 10-yard TD catch and Horn and the defense did enough to stop Bo Nix and the Tigers' attack.

Auburn (2-2) had won eight in a row in the series and jumped out to a 9-0 lead in the opening 10 minutes. But Nix, the sophomore quarterback, threw three interceptions and the Gamecocks (2-2) cashed in each time to win consecutive games for the first time in more than a year.

Smith had eight catches including his score midway through the third quarter that put South Carolina ahead for good, 20-19.

Auburn was driving on its following series when Nix threw his third interception -- and second to Horn, who brought the ball down the left sidelines to the Tigers' 8. Harris was in the end zone a play later for a 27-19 lead and Auburn could not recover.

The Tigers closed to 30-22 on Anders Carlson's 22 yard field goal with 6:39 left. Auburn got the ball back once more with 2:15 left and drove to the South Carolina 13. Nix, though, was called for intentional grounding trying to avoid a sack and the Gamecocks held on to beat the Tigers for the first time since 1933.

Auburn Coach Gus Malzahn said his team will have to get past this quickly. "We're just going to have to be big boys and we're going to have to man up and put it behind us and go into next week and find a way to win," he said.

South Carolina had not won back-to-back games since defeating Kentucky and then-No. 3 Georgia last season. That win over the Bulldogs was the last time the Gamecocks had beaten a ranked opponent.

Auburn's offense looked unstoppable the first half and doubled up South Carolina in yardage (243-119) the first 30 minutes -- except when Nix put the ball in danger.

Nix had 272 yards passing and was sacked three times.

Tank Bigsby, the Auburn freshman, had 111 yards rushing and went past 100 yards for a second consecutive game. 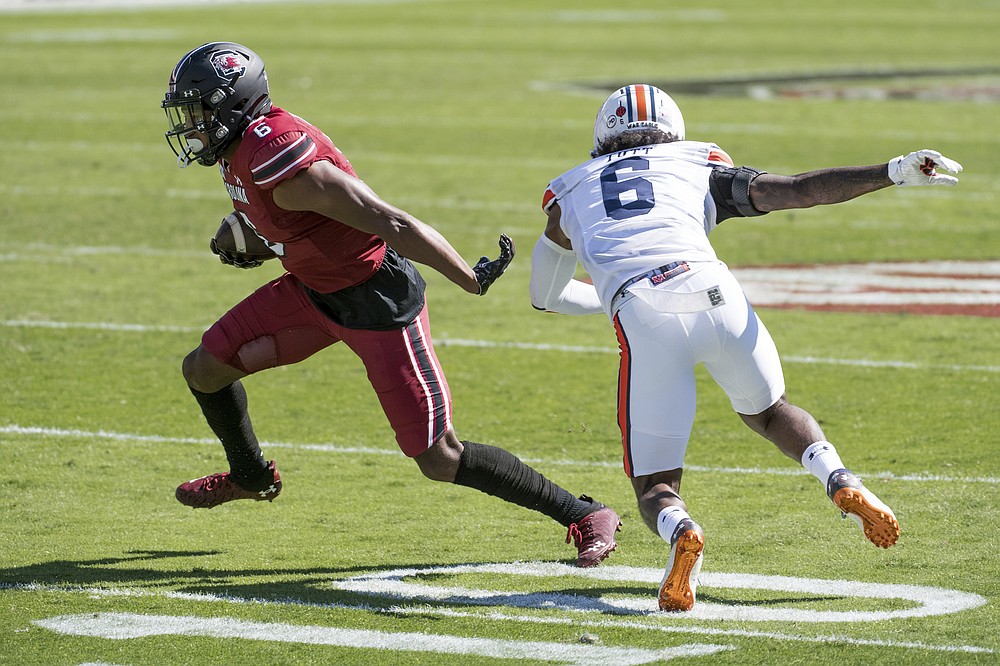 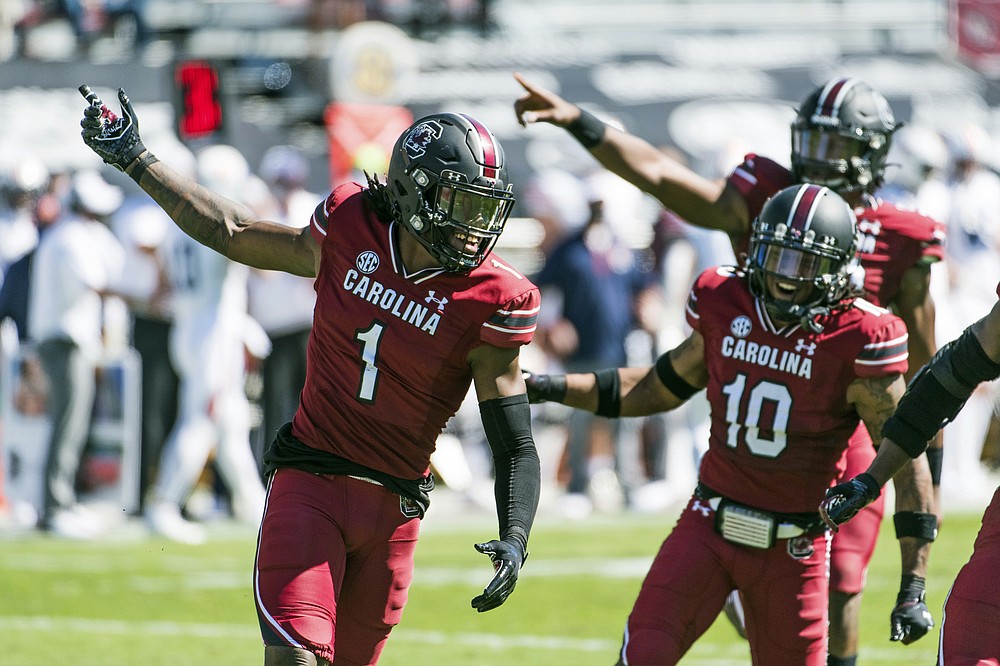 South Carolina defensive back Jaycee Horn (1) celebrates an interception against Auburn during the first half of an NCAA college football game Saturday, Oct. 17, 2020, in Columbia, S.C. (AP Photo/Sean Rayford) 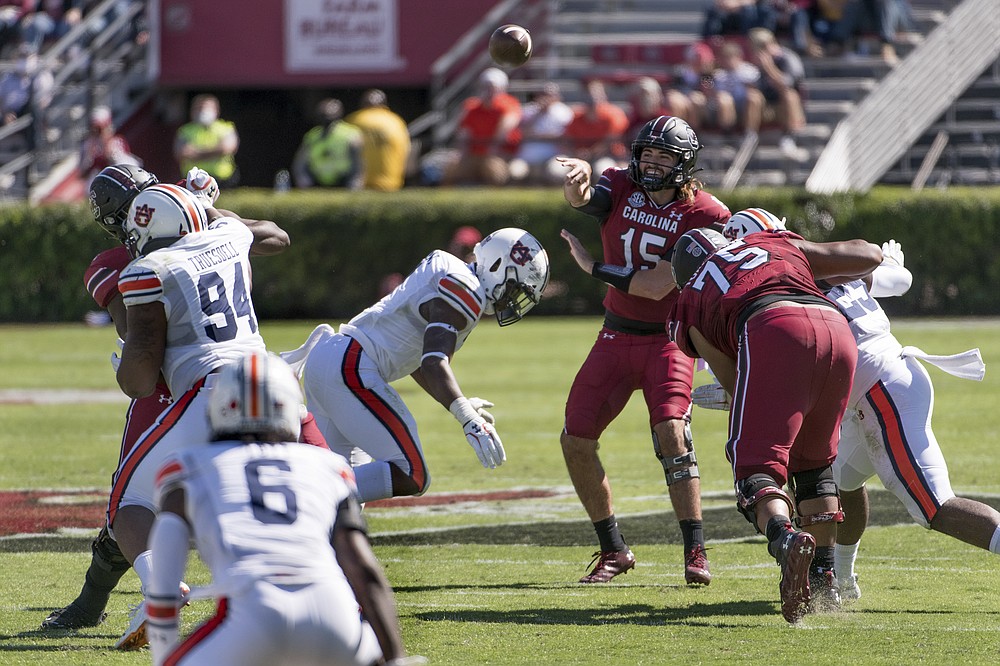 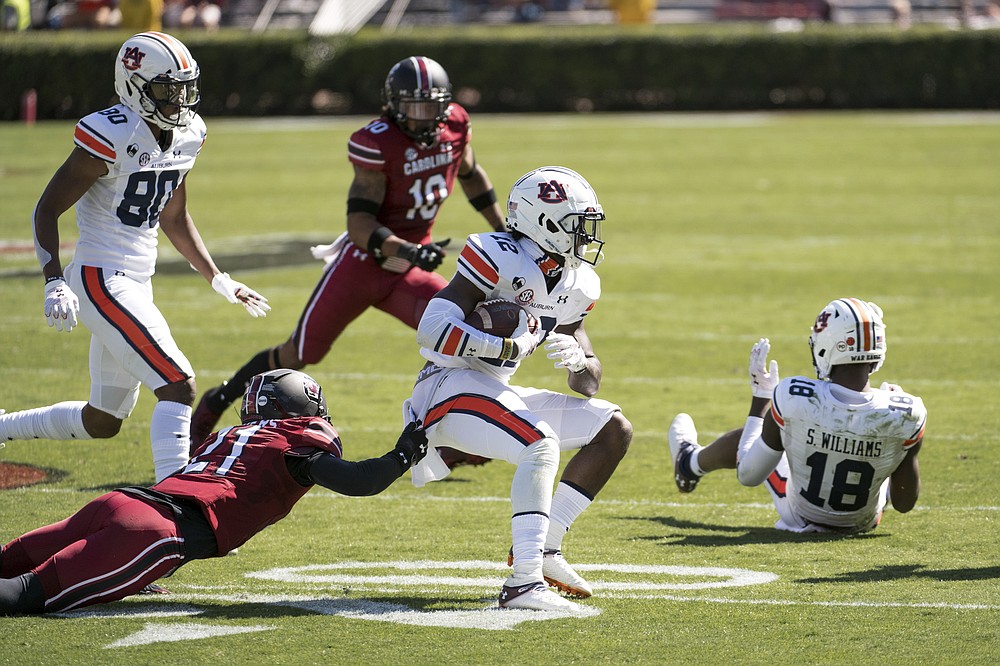