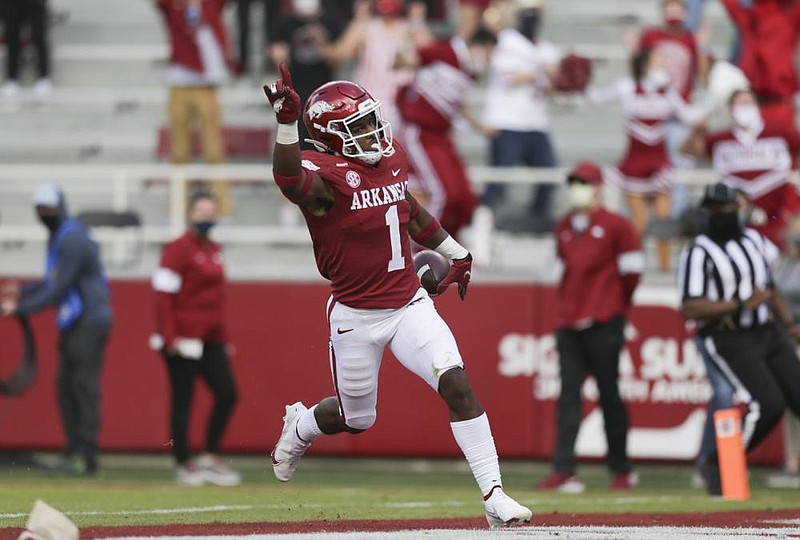 Arkansas defensive back Jalen Catalon scores on a 35-yard interception return in the second quarter to put the Razorbacks up 17-0. It was one of six interceptions Arkansas made Saturday. (NWA Democrat-Gazette/Charlie Kaijo)

Picks lead to grins for Hogs

FAYETTEVILLE — The Arkansas Razorbacks had as many interceptions Saturday against Ole Miss as they had in 12 games all of last season.

Rebels quarterback Matt Corral had thrown just one interception in 88 passes the first three games — in the opener against Florida — but the Razorbacks picked him off six times as the University of Arkansas beat Ole Miss 33-21.

During last season’s 2-10 season that included an 0-8 SEC mark, the University of Arkansas combined for six interceptions.

The six interceptions Saturday tied for the most the Razorbacks have had against an SEC team since joining the conference in 1992. They also had six in a 52-6 victory over Mississippi State in 2003.

Arkansas is the second SEC team in as many weeks to have six interceptions. Kentucky also did it in a 24-2 victory over Mississippi State the previous Saturday.

True freshman cornerback Khari Johnson made his first start for Arkansas with senior Jerry Jacobs, who was injured at Auburn last week, playing off the bench.

Johnson became the 17th first-time starter for the Razorbacks this season.

Junior linebacker Hayden Henry made his first start in two years while filling in for the injured Bumper Pool, who didn’t dress out. Henry’s only previous start was against Texas A&M in 2018.

Senior Ty Clary, who started the previous two years at center, made his first start of the season. Clary started at guard for Beaux Limmer, who played off the bench.

Sophomore receiver Treylon Burks and senior running back Rakeem Boyd returned to the starting lineup after missing the Auburn game because of injuries they suffered two weeks ago at Mississippi State.

Senior receiver De’Vion Warren, who started last week in place of Burks, stayed in the lineup with sophomore Trey Knox not starting.

As the Razorbacks did at Mississippi State, they went with a three-man defensive front and started senior Jonathan Marshall at nose guard, and sophomore Zach Williams and redshirt freshman Eric Gregory at the ends.

Arkansas started five defensive backs, with junior safety Myles Mason making his first start of the season and second of his career. He started last season’s finale against Missouri.

Arkansas has three interception returns for touchdowns this season, including Greg Brooks’ 69-yarder at Mississippi State.

It’s the first time the Razorbacks have had three interception returns for touchdowns in a season since 2016 when Ryan Pulley against Texas State, Henre Toliver against Alcorn State and Santos Ramirez against Florida did it.

Reid Bauer took over for George Caratan as the Razorbacks’ primary punter and had a good day. Bauer averaged 46.9 yards on seven punts, including a long of 62 that bounced into the end zone for a touchback.

Two of Bauer’s punts were downed or fair caught inside the Ole Miss 20. He had two touchbacks.

Coming into the game, Bauer had punted twice the first three games — once for 38 yards at Mississippi State and once for 31 yards at Auburn.

A third-down pass by Arkansas quarterback Feleipe Franks first was ruled an interception by Ole Miss safety Jaylon Jones. After being reviewed by the replay booth, it was ruled an incomplete pass.

Linebackers Bumper Pool and Levi Draper, who had surgery last week, and cornerback Montaric Brown were not spotted on the sideline.

Among those not dressed out were receiver Koilan Jackson, and defensive backs Micahh Smith and Malik Chavis.

Defensive end Dorian Gerald and linebacker Deon Edwards wore their jerseys but did not have pads on.

Arkansas now holds a 37-27-1 edge in the series against Ole Miss, according to the Razorbacks’ math, while the Rebels contend their deficit is 36-28-1.

The one-game difference in records stems from Arkansas’ contention it won the 1914 game 1-0 in Little Rock because Ole Miss used an ineligible player. The Rebels count that game as a 13-7 victory, which was the final score on the field.

Arkansas improved to 12-2 against Ole Miss in Fayetteville and 17-12 in SEC games between the teams.

Linebacker Grant Morgan was the winner of the Crip Hall Award, which is given annually to the most outstanding senior in the homecoming game.

Morgan led the Razorbacks with a career-high 19 tackles and had a 23-yard interception return for a touchdown.

The Razorbacks beat an SEC team at home with a 31-10 victory over No. 11 Florida on Nov. 5, 2016. They had lost 12 consecutive home SEC games — 10 in Fayetteville and two in Little Rock — prior to beating Ole Miss on Saturday.

Yurachek is the son of Arkansas Athletic Director Hunter Yurachek.

The Reynolds Razorback Stadium sound system played “Baby Shark” at the end of the game, a nice dig at the Land Sharks nickname for Ole Miss’ defense.