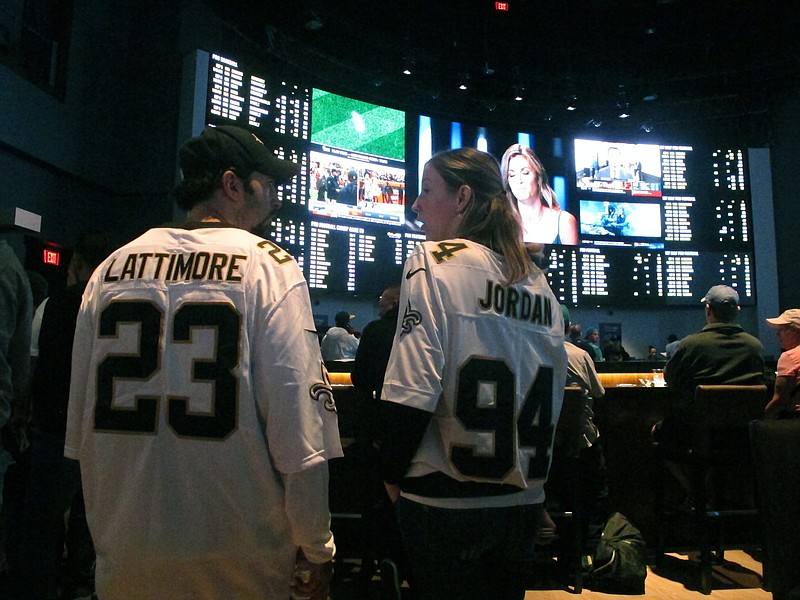 This Sept. 9, 2018 photo shows football fans waiting for kickoff in the sports betting lounge at the Ocean Casino Resort in Atlantic City, N.J. Figures released on Thursday, Oct. 15, 2020 showed New Jersey broke its own recently set U.S. record for the most money bet on sports in a single month in September when gamblers plunked down more than $748 million on sports. (AP Photo/Wayne Parry)

ATLANTIC CITY, N.J. -- New Jersey's fast-growing sports betting market blew past its own national record in September, taking in more than $748 million in bets from sports gamblers finally able to wager on football during the coronavirus outbreak.

Both figures easily eclipsed what had been the U.S. record of $614 million set in Nevada in November last year.

So far this year, New Jersey casinos and tracks have taken in nearly $3.3 billion in sports bets alone. That equals or surpasses what Atlantic City used to make in an entire year from casino gambling before sports betting was legalized.

New Jersey won a U.S. Supreme Court case in 2018 allowing all 50 states to offer legal sports betting should they so choose. It quickly dominated the East Coast market and challenged Nevada for the national lead.

The $748 million includes the total amount of bets accepted by the casinos and tracks; after paying off winning bets and expenses, they kept $45 million of that total.

Including casino games, the gambling industry in New Jersey won $323.2 million in September, an increase of 6.5% over September last year, when there was no pandemic and casinos were operating at full capacity. Casinos are currently limited to 25% occupancy as a precaution against the coronavirus.

The Ocean Casino showed the largest percentage increase in September revenue in Atlantic City, and CEO Terry Glebocki said that was from several factors.

"The combination of Labor Day weekend and the return of indoor dining, limited to 25%, afforded us the opportunity in September to continue the momentum created here at Ocean," she said. "Our guests have enjoyed dining again at their favorite restaurants within our casino resort, and our year-over-year gaming revenue growth of nearly 27% is indicative of the successes we have achieved."

James Plousis, chairman of the New Jersey Casino Control Commission, was heartened by the pace of recovery of casino gambling revenue.

"Casino win was 85% of last September's performance, aided by the reopening of casino restaurants on Sept. 4, and the resumption of food and beverage service on casino floors," he said. "These results were promising in the midst of continuing travel advisories that decrease visits from out of state, as well as restrictions on capacity, amenities and entertainment that have made 2020 not reasonably comparable to last year."

The Freehold Raceway began taking in-person bets on Sept. 24, making it the third horse-racing track in the New Jersey sports betting market. It has not yet been approved for mobile sports betting and reported a loss of almost $45,000 in the final week of the month.

The Meadowlands Racetrack in east Rutherford, near New York City, continued to dominate sports betting in the state, with $28.1 million in revenue in September. Monmouth Park in Oceanport, about 18 miles east of Freehold near the Jersey Shore, made nearly $3.5 million. 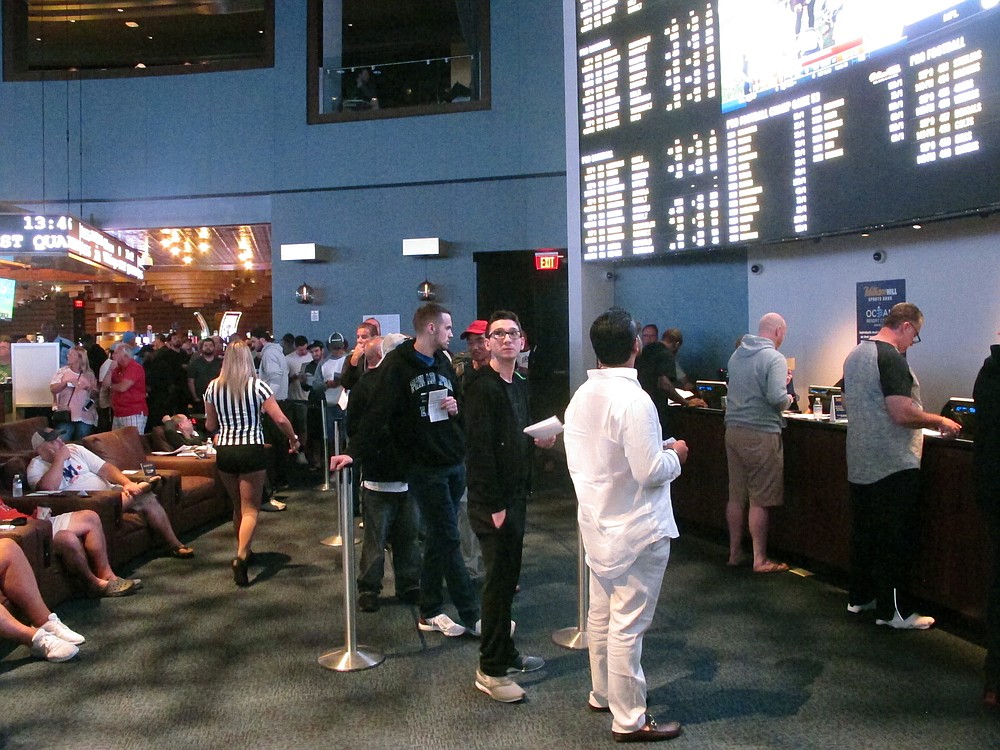 In this Sept. 9, 2018 photo, gamblers line up to make sports bets at the Ocean Casino Resort in Atlantic City, N.J. Figures released on Thursday, Oct. 15, 2020 show New Jersey broke its own recently set U.S. record for the most money bet on sports in a single month in September, when more than $748 million was bet on sports. (AP Photo/Wayne Parry)