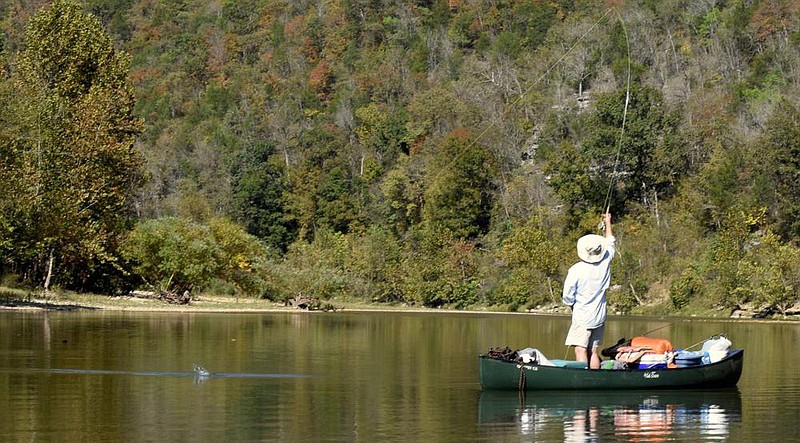 A thick fog beard hangs over the Buffalo National River at dawn last Sunday. Blue water vanishes around a bend beneath the fog. The top of a tall, pink bluff rises above the fog while turkey vultures circle above.

On Monday, fall arrived. Wind in the wee morning hours practically doubled over the tall tents and ushered in waves of thick, gray clouds. Gusts liberated legions of leaves that fluttered to the water like green, gold and red confetti.

Leaves, mere husks in the air, came alive in the life-giving water. Their colors were vibrant and bright, issuing a parting salute to another year that fades into the ages. It has been a natural ritual for as long as the river has flowed here, heedless of human vexations.

In water as clear as air, Bill Eldridge of Benton swears that he sees a paddlefish. Indeed he does, the first I have seen in a mountain stream. It is easily a 60-pounder, identifiable by a snout that looks like a beaver's tail. It lingered around our canoes, giving each in our group of five ample time to admire.

A 12-inch smallmouth bass smashes a buzzbait. While it fights, two big smallmouths materialize from beneath a big rock and try to snatch away the buzzbait. Had I been quicker on the draw, I would have pitched a plastic lizard on top of them. As quickly as they appeared, they were gone.

For years, an October float on the Buffalo was an annual event for me, Eldridge, Rusty Pruitt of Bryant and Ed Kubler of Benton. In the early years, my sons Daniel and Matthew, and Eldridge's sons Matthew and Nathan, were part of the group. Three of the boys grew into young men and moved away. They are at the stage in life where careers and other concerns keep them away from rivers. One went away, never to return. In time, the adults dropped away, too. Eldridge and I did the last autumn overnighter in 2017.

The coronavirus pandemic reset everybody's priorities. Maybe it showed us how tenuous our existence really is, or maybe we all just finally succumbed to cabin fever. Whatever the reason, everybody enthusiastically accepted Eldridge's texted invitation to a three-day, two-night float on the Buffalo River from Spring Creek Recreation Area to Rush Recreation Area.

Joining us this year was Richard Phelan, who recently retired from his dental practice in Benton. Phelan participated in a couple of car camping adventures, but this was his first time on an overnight float with this group.

The Buffalo was a popular destination Oct. 10-12, judging from the number of people putting in and taking out at Spring Creek. A few were overnighting on the river, but most were day trippers.

We put in at noon and floated 2 miles to a certain gravel bar that was created when the river cut a new channel during a flood. The new gravel bar occupies what was once a beautiful and productive fishing hole. Our former campsite is about 100 yards inland and is landlocked. We reminisced about the time a tremendous thunderstorm beset us so fast and so violently that the boys sought refuge under overturned canoes, but not before they built a bonfire so big that it remained ablaze even after the torrent subsided.

I have never gotten so wet so fast as I did that day.

As always, we dined upon hubcap-size rib-eye steaks that Kubler grilled to perfection. They were better than ever this year, however, thanks to having marinated them all day in Worcestershire sauce. Kubler also wrapped fresh corn on the cob and potatoes in foil and roasted them in the campfire. Kubler and I chased it with a single shot of apricot brandy from a plastic bottle. We marveled at a moonless, starlit sky before surrendering to slumber on air mattresses inside our tents.

Kubler travels like a Napoleonic general. His tent is palatial, complete with an anteroom and a chair at the door.

"I need to sit down so I can put on my shoes in the morning," Kubler said.

"Wow! He's even got a rolltop desk in there, with a quill pen and a jar of ink!" I joked.

We started early on Sunday with a pot of gravel bar coffee. Usually we wait for our tents to dry, but this time we tossed the gear wet into the canoes and got underway early in hopes of passing Buffalo Point before the wind rolled itself into its usual headwind gale. We were successful, and the most difficult mile of the trip came and went peacefully. About a mile later, we encountered the paddlefish.

With the water so low and so clear, the fishing was very difficult. Smallmouth bass held tight to cover.

Instead, we saw scores of suckers, which are increasingly numerous in an increasingly deteriorating stretch of the river that gets wider and shallower every year. This is the untold story of America's first national river, which is under assault on multiple fronts. The C&H Hog Farm was only the most visible threat. When it folded, conservationists wrongly declared victory and congratulated themselves for "saving the Buffalo," willfully ignorant of the erosion and siltation that have left large portions of the river bereft of habitat for bass, sunfish, mussels, Ozark hellbenders and other amphibians. That process started long before the hog farm and will continue after.

We noticed most of what was absent. At first the air seemed so quiet, but it was actually resonant with sound. Songbirds trilled delicately. Crows cawed, and insects hummed and buzzed. Bald eagles (three in all) made their shrill cackles. What we didn't hear was artificial noise. It took a while to identify what was missing, and it seemed to amplify the ambient choir.

Monday's high-pressure front made it nearly impossible to fish from a canoe, but Pruitt and I persevered to log our best day of catching. We ended the day early, but I'll bet we don't wait so long to return. 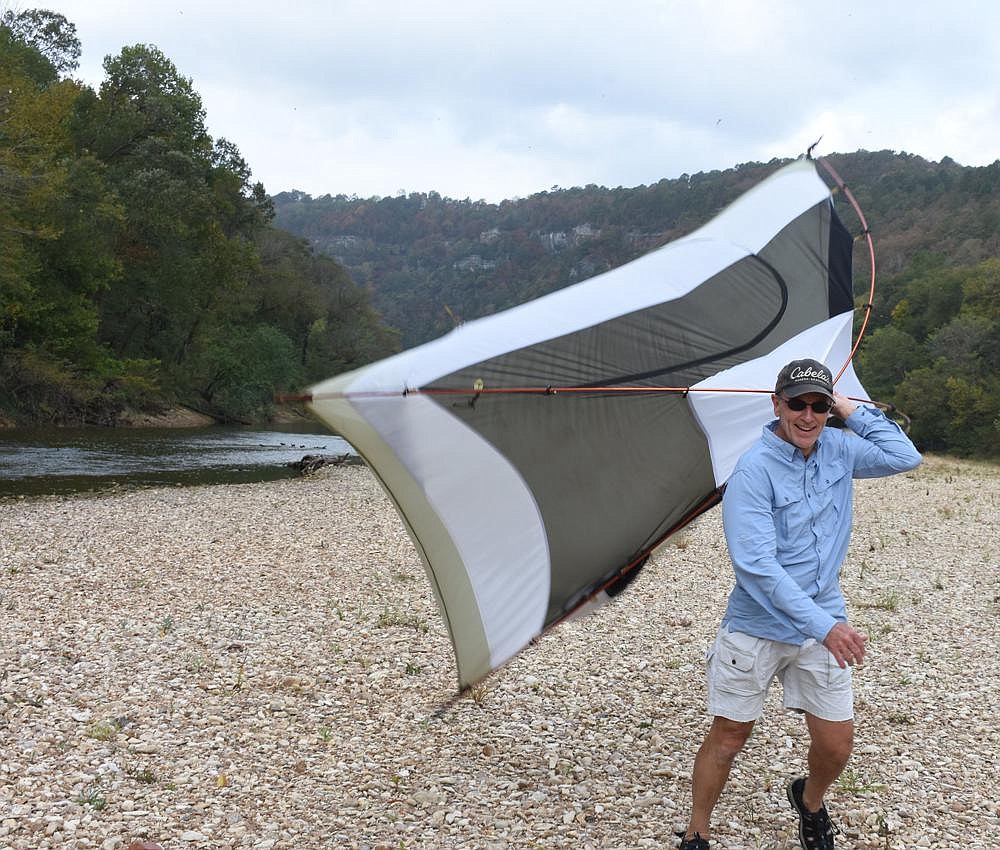 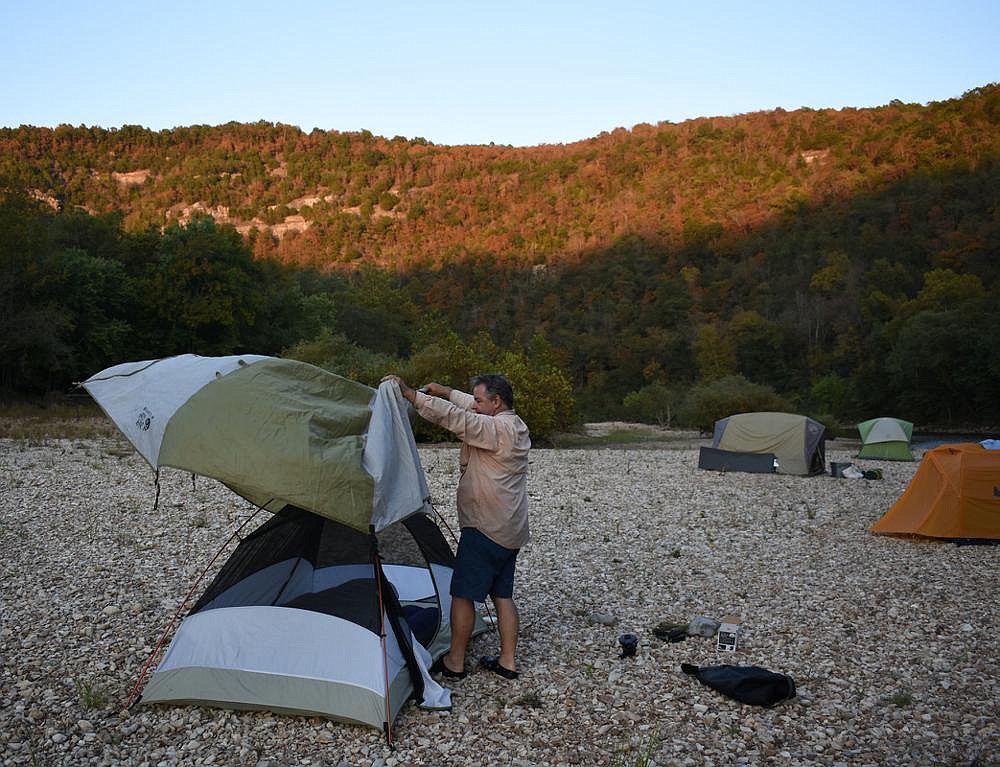 The author spreads a rainfly over his tent last Sunday on a Buffalo River gravel bar. (Arkansas Democrat-Gazette) 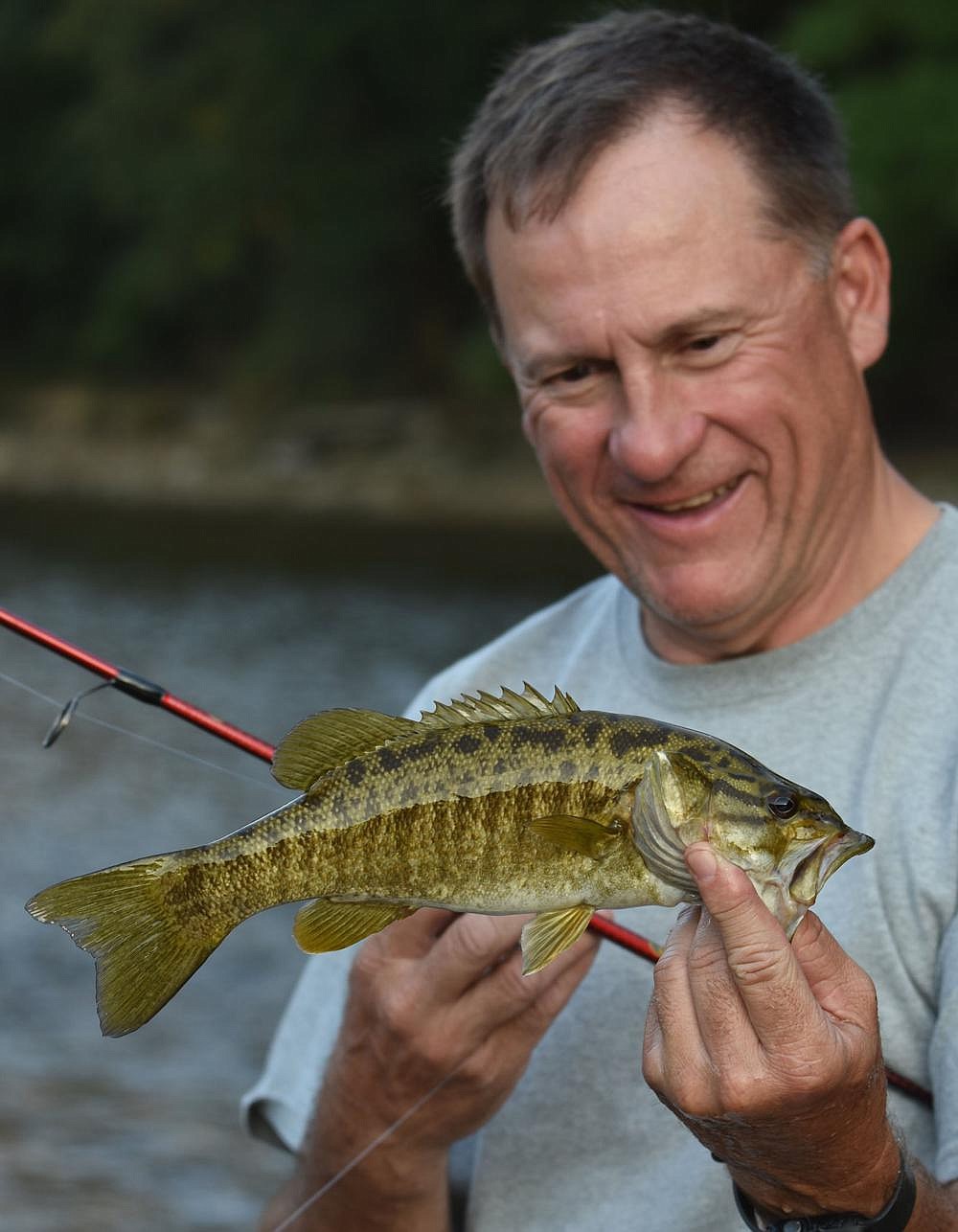