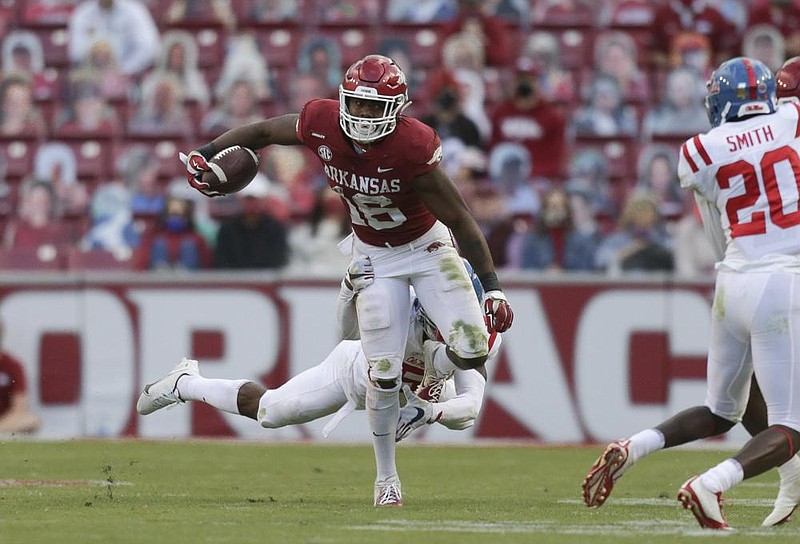 FAYETTEVILLE -- Treylon Burks made the type of catch usually reserved for Sundays when it mattered most Saturday.

Facing third and 1 at the Ole Miss 7, University of Arkansas quarterback Feleipe Franks tossed a fade ball into the corner of the end zone in a spot only Burks could get it.

That's exactly what he did.

[Video not showing up above? Click here to view » https://www.youtube.com/watch?v=oK26HewNbbo]

Burks left his feet, extended his right arm, snagged Franks' pass with only his right hand and tapped his right foot down inches from the sideline. Officials confirmed the touchdown on replay that put Arkansas ahead 26-14 late in the game after the Rebels reeled off 14 points in a row.

Burks knew the review was a formality.

"The catch, it didn't surprise me," Burks, a Warren native, said after the Razorbacks' 33-21 victory. "I do it in practice. It's just something I work on and something I want to get better at.

"I had to sit out last week against Auburn. I just came back confident and I knew my teammates had confidence in me, so I just went in and played for them and the Arkansas Razorback nation."

One week after traveling but not playing in a 30-28 loss to the Tigers because of a first-half knee injury suffered at Mississippi State in Week 2, Burks set career highs in receptions (11) and receiving yards (137) to go with his score.

Just days earlier, Arkansas Coach Sam Pittman wasn't sure whether the sophomore was going to be available against the Rebels. Burks practiced throughout the week, but his status as of Thursday was up in the air.

"Y'all saw him, I mean, he probably played about 80%," Pittman said. "He's a great football player. But he wasn't healthy today. I mean, he was healthy enough to play, but he wasn't his regular self.

"He's just a leader. I love him. He's a very physical guy, he made some big plays out there. You could see the rust on him a little bit, too, from not being healthy the last couple of weeks. But he's a competitor. He loves Arkansas."

Burks became the first Razorbacks player to catch 10 or more passes and finish with 100 or more receiving yards in an SEC game since Cobi Hamilton in October 2012 -- against Ole Miss.

Five of his 11 catches went for a first down, and his third went for 55 yards. The catch-and-run down the Arkansas sideline set up running back Rakeem Boyd's 1-yard score to put Arkansas ahead 7-0.

"He's a heck of a player, but at the end of the day, man, he's continually getting better week in and week out," Franks said. "He works super hard. When he got hurt, he worked super hard in the training room to get his body back to be available for our team. I thought Treylon did a great job."

Burks' impact on an offense that sputtered at times against the Rebels extended beyond the passing game. He also was credited with 46 rushing yards on four carries, most of which came on run-pass options from Franks. Running back Trelon Smith led the team with 54 yards on 15 carries.

Pittman said the plan for Burks might be changing.

"We need to get him the ball as much as we can," Pittman said. "I anticipate his touches going up."

Burks' performance, coupled with seven turnovers procured by the defense, led Arkansas to win No. 2 entering the team's bye week. As a home-state kid, he is thrilled to have a helping hand in guiding the Razorbacks to another win.

"We're starting to believe in each other," he said. "I just like the fact that we're playing as a team. We're not playing selfish. We're one unit, [the] one goal is to win. It's showing on Saturdays, so that's what I'm proud of.

"I just give all the glory to God and my teammates for pushing me to be the person that I am. I just go out there and play for them."