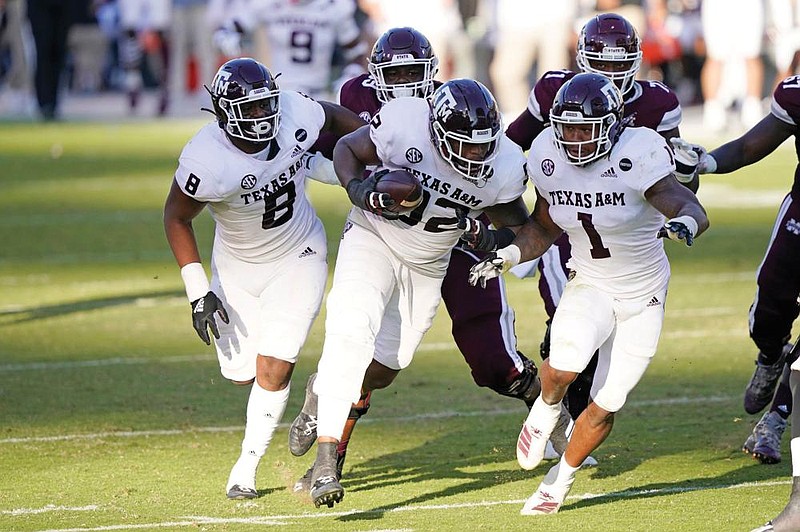 Texas A&M defensive lineman Jayden Peevy (middle) runs with the ball after recovering a fumble Saturday while escorted down the field by teammates DeMarvin Leal (8) and Buddy Johnson during the second half of the No. 11 Aggies’ 28-14 victory over Mississippi State on Saturday in Starkville, Miss. Peevy did not score on the play. (AP/Rogelio V. Solis)

STARKVILLE, Miss. -- Texas A&M controlled the line of scrimmage and the clock.

Isaiah Spiller ran for 114 yards and two touchdowns and Kellen Mond threw for two scores to help the No. 11 Aggies beat Mississippi State 28-14 on Saturday.

"When you're on the road, you've got to be able to control clock, control tempo, and you've got to run the football to do that," Aggies Coach Jimbo Fisher said. "And we did at times today. The other part was running out the last five, six minutes of the game when we got the ball and we got down there and could have had a score. We didn't, but eating that clock up and not giving it back, that was huge."

Texas A&M (3-1) led 14-0 at the half and had 325 yards of total offense in the game. Ainias Smith caught five passes for 20 yards and a touchdown. Chase Lane caught two passes, including a 51-yard touchdown reception in the opening minutes of the third quarter.

"I thought we literally squandered the first half," Bulldog Coach Mike Leach said. "Right now we're one team on Tuesday and Wednesday and another team on Saturday. We need to be able to transition that to the field. And if you think that's frustrating for you, you should try it from my perspective."

Leach benched starting quarterback KJ Costello midway through the second half for freshman Will Rogers, same as he did last week in a 24-2 loss at Kentucky. Rogers connected with Malik Heath for a 15-yard touchdown pass in the fourth quarter.

"Offensively, we were a bunch of pincushions out there," Leach said. "And I think its mental on the part of our O-line, because we can block our own defensive line consistently in practice and A&M couldn't even do that. So, it's definitely mental."

Texas A&M's defense continually disrupted the line of scrimmage, finishing with six sacks and eight tackles for loss. Mississippi State had minus-2 yards rushing and just 217 yards of total offense.

"Day 1 we believed in the game plan," tackle Jayden Peevy said. "We saw Kentucky come with a three-man front. We watched a lot of film against these guys. We saw [Kentucky] get a victory so we planned on it all week."

KNOXVILLE, Tenn. -- Kelvin Joseph and Jami Davis returned interceptions for touchdowns in the first half and Kentucky shut out No. 18 Tennessee in the second half to sink the Volunteers.

It was Kentucky's first win in Neyland Stadium since 1984, the Wildcats' largest margin of victory in Knoxville since 56-0 in 1893 and their most lopsided victory in the series since 1935.

"I don't like our team inheriting 20, 30 years of history that's not on these guys. We're responsible for what we've done lately," Kentucky Coach Mark Stoops said. "Two years ago, I didn't like how I had them ready to play and we altered that, got some things fixed and played much better. That's on me as much as it is on the team."

After getting six interceptions and allowing only a safety against Mississippi State last week, Kentucky (2-2) intercepted three passes against the Vols (2-2).

"This game was definitely personal for us," said Davis. "We came out and put our foot on their necks. We're tired of leaving here empty-handed."

Tennessee has now followed up an eight-game winning streak with a two-game losing streak.

Joseph's 41-yard touchdown and Davis' 85-yard return -- both off interceptions thrown by Jarrett Guarantano -- helped put Kentucky up 17-0 in the second quarter.

With about 5 minutes left in the third quarter and trailing by 20, Tennessee went three-and-out for a second consecutive possession and was showered with boos from the sparse crowd of 22,519.