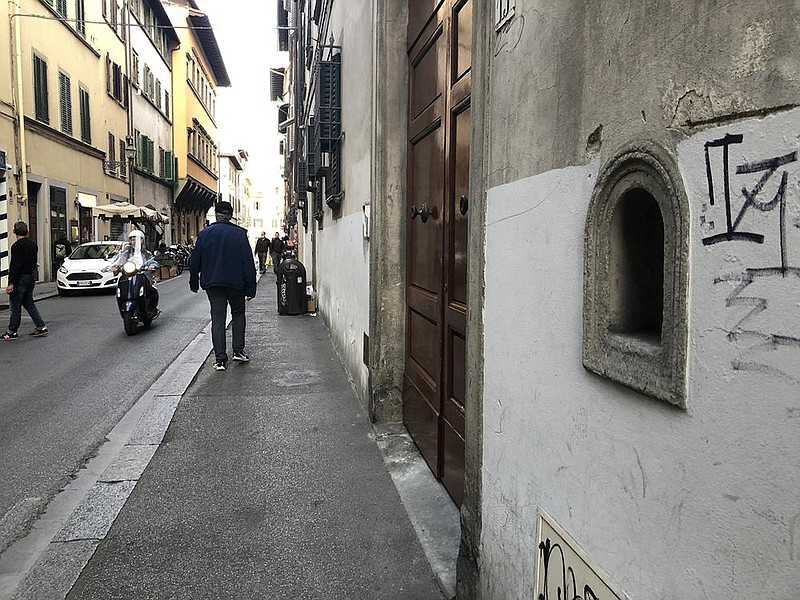 The merchants of Florence, Italy, built “wine windows” like the one at right to reduce contact with customers as the plague swept over the city 672 years ago. (The Washington Post/Chico Harlan)

FLORENCE, Italy -- When the new disease first arrived, little was clear beyond the fact that it killed with terrifying speed. Near-certain death trailed the first symptoms by four days or less. The doctors were helpless. The city was soon overwhelmed with corpses. Workers in church yards dug pits down to the water table, layering bodies and dirt, more bodies and dirt.

One writer of the time compared the mass graves to "lasagna."

Seven centuries later, the plague in Europe stands as an example of a pandemic at its worst -- what happens when so many people die so quickly that some foresee the end of the human race. Few places were hit harder than Florence, whose population in 1348 was cut by at least one-third and possibly far more.

A visit to Florence might provide some comforting perspective on modern times, a chance to dwell on a period that was patently deadlier and more fear-inducing than the coronavirus pandemic. But instead, in talking with historians and searching for the plague's lasting marks, what stands out most are the similarities, 672 years apart.

Theirs was a mysterious bacteria spreading at a time when people didn't yet understand disease transmission; ours a novel virus infiltrating a world that prides itself on its medical knowledge. But in both cases, the first instinct was to close borders to try to keep the disease at bay. When that didn't work, officials called for strict rules, but only some people paid attention. All the while, there was a proliferation of conspiracy theories. Many tried to blame the disease on outsiders or minorities. In medieval Europe, those were often Jews.

"Much has changed since the 1340s," author John Kelly wrote in his book on the plague, "but not human nature."

Then, like now, people were divided over how to face the threat. Some in Florence shut themselves inside their homes and lived in isolation, according to a detailed account from 14th century writer and poet Giovanni Boccaccio. Others ventured out, armed with herbs and spices intended to purify the air. Still others were cavalier about the disease and went about their lives socializing, drinking heavily, "satisfying their appetites by any means available," Boccaccio wrote.

Nobody was safe, and isolation scarcely worked in a dense city. But the people who gathered in groups courted greater risk. Marchionne di Coppo Stefani, a wealthy Florentine, wrote of daring dinner parties in which a host would gather 10 friends, with plans to reconvene again the next night.

At the next dinner, Stefani said, sometimes "two or three were missing."

Worst of all, in an obvious parallel to the present, many faced their last moments cut off from everybody else, according to accounts from the time. During the plague, these lonely deaths were borne not out of public health protocols but out of sheer terror. People, after the onset of symptoms, were a mortal danger to those around them. So, in some cases, family members abandoned sick loved ones, even children. Their deaths were noticed only when neighbors smelled the rotting corpses.

"Many departed this life," Boccaccio wrote, "without anyone at all as a witness."

The plague lashed Europe again and again over centuries, devastating London in the 1660s, and Marseille, France, in 1720, but nothing was worse than what struck in the late 1340s and early 1350s, when the disease touched almost the entire continent and killed tens of millions of people.

This was Europe's first wave. Florence was one of the hot spots.

People were panicked. It was unclear how the disease spread, but there was no doubt that proximity to others was a risk. Animals -- oxen, dogs, pigs -- were dying, as well. People wondered whether it was retribution from God. They prayed and disavowed sin. They obsessed about the air and used scents and fires to ward off perceived deadly vapors. They were mostly guessing; scientists wouldn't know what actually caused the plague, how the bacteria was spread by rats and fleas, until 500 years later.

At a time when people were trying to avoid the disease with trial-and-error strategies, only one thing seemed to work: If the plague arrived in your city, drop everything, flee the crowds, and take refuge in the countryside.

Boccaccio's masterpiece, The Decameron, was written several years after the disease had swept through Florence and describes a fictional getaway: 10 young characters leaving the plague-hit city and heading into the hills.

The place where they were depicted seeking refuge was mostly likely Fiesole, a town about six miles northeast of Florence.

All through the coronavirus pandemic, there have been accounts of people taking their own countryside flights to safety -- New Yorkers decamping to the Hamptons, British urbanites seeking out holiday cottages. People were doing much the same thing as Boccaccio's characters. Amid the coronavirus emergency, they were even fleeing Florence for Fiesole.

Simone Cerrina Feroni, 62, is among those seeking refuge from the modern-day plague in Fiesole, Feroni at his ex-wife's home. As Italy's coronavirus crisis deepened this spring, his ex-wife invited him to leave his Florence apartment. He had a heart condition. He'd be safer away from the crowds.

He said yes, and he spent the next 50 days at the villa with his ex-wife and her brother, almost never leaving the property. The weather was mild, he said. The air, clean. They had noon lunches with formal table settings and dinner outside in the garden. The danger, he said, always felt far away.

Boccaccio's 14th century characters passed their time in self-imposed exile by telling stories about kings, priests and sex. But Cerrina Feroni said his ex-wife had already heard all his stories many times over, and he had likewise heard all of hers.

So instead, during pandemic lockdown in Fiesole, they watched Netflix. 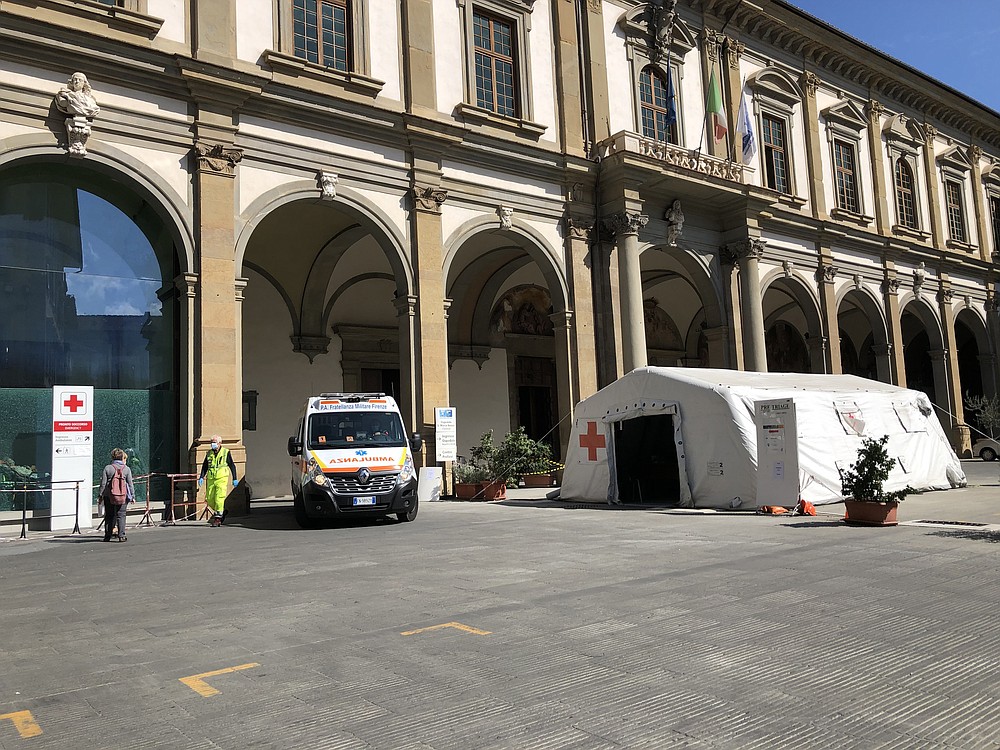 Outside Santa Maria Nuova Hospital, a tent is set up for screening potential coronavirus patients. MUST CREDIT: Washington Post photo by Chico Harlan. 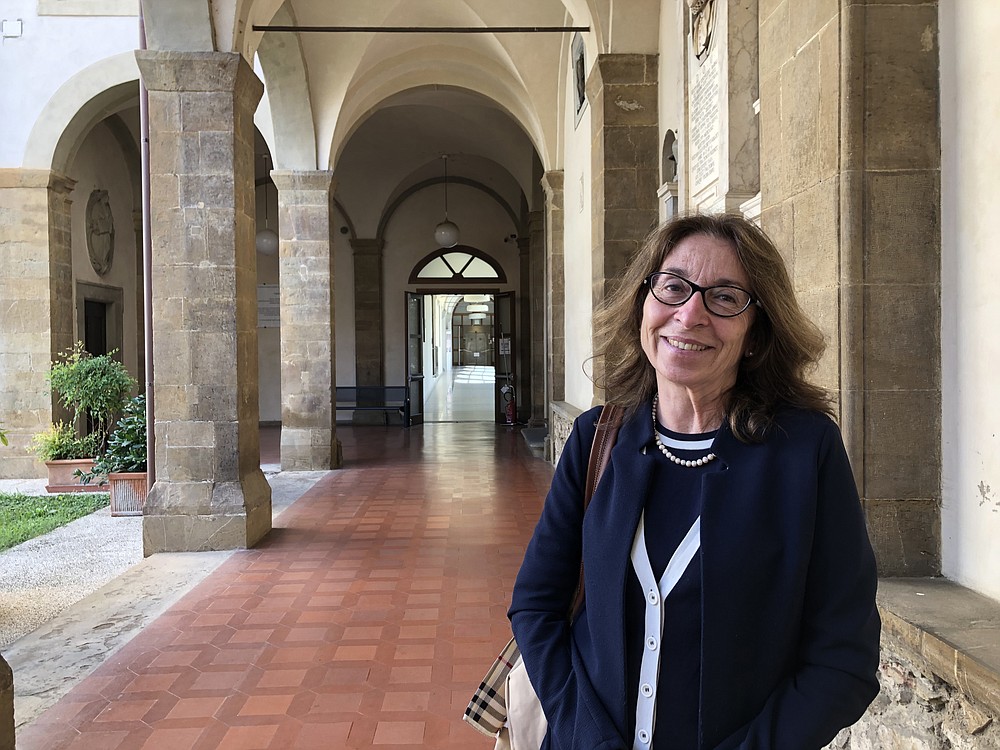 Donatella Lippi of the University of Florence said she'd studied the plague with the "distance of a historian" until this year, when the world experienced a pandemic of its own. MUST CREDIT: Washington Post photo by Chico Harlan.