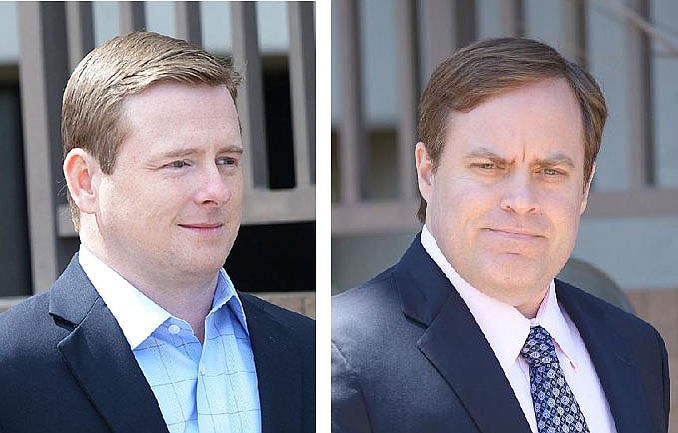 "Evidence of the conspiracy was overwhelming," the 8th Circuit Court of Appeals said of the kickback scheme involving grants to Ecclesia College in Springdale. The college received more than $550,000 in state grants steered there by Woods, Shelton and co-conspirator Micah Neal of Springdale, who was a state representative at the time. Then-college president Oren Paris III would make payments to Shelton's consulting company after each grant. Shelton then passed kickbacks to Woods and Neal.

Neal cooperated with authorities and received a one-year sentence to home detention, which he has served. A federal court jury in Fayetteville convicted Woods and Shelton on May 3, 2018. Woods received an 18-year prison sentence. Shelton was sentenced to a six-year term. Paris resigned as president of the college and pleaded guilty five days before the trial began. He received a three-year sentence but reserved the right to appeal.

Woods, Shelton and Paris based their appeal on destruction of evidence by Special Agent Robert Cessario of Bentonville. Woods and Shelton also argued there was an improper jury instruction at trail. They also claimed the trial judge favored the prosecution. The appeals court rejected the appeals on all points.

Cessario's actions surfaced in pretrial hearings in the case. Paris decided to plead guilty after the trial judge ruled against the defendants' motions to dismiss the charges over Cessario's acts.

Friday's 28-page ruling explained why the court refused Woods' and Shelton's requests for either dismissal of the charges or a new trial despite "an FBI agent's undisputedly wrongful destruction of data on a laptop computer," as the ruling described it.

The ruling cited the same arguments the appeals court used in rejecting Paris' appeal, a ruling it made March 31. While Cessario's actions were wrong, the court ruled, the defense could not convincingly show Cessario destroyed anything of value to the defendants or that hurting the defense was his motive in committing such a drastic, career-threatening act. The case resulted in an FBI inspector general's investigation, records show, but the results have never been made public.

Paris' belief the laptop contained evidence that would help his case is "speculation built upon speculation," the appeals court ruled in that earlier case. Paris' argument assumes Cessario risked his career to hide Paris' innocence when his motive could have been to hide the fact he possessed something he shouldn't have, the justices wrote.

"Paris is right that it is difficult for him to show what he cannot know," the ruling in his case says. "After all, only Agent Cessario knows for sure what he destroyed and whether it had any connection to this case. But without even a viable theory about what is missing, much less how it might differ from what he already had in his possession, Paris has not established a violation of his due process rights."

In Friday's ruling, the court found: "Without more substantial independent arguments to distinguish their cases from their co-conspirator's case, Woods's and Shelton's arguments largely reduce to the challenges we rejected in Paris."

The National Association of Criminal Defense Lawyers intervened in Shelton and Woods case on Shelton's behalf. "If this case does not define the outer boundaries of what constitutes outrageous or intolerable government conduct, then there is no case which may do so," says the brief, filed in 2019 by attorney and association member Justin Johnson of Kansas City, Mo.

Trial judge Timothy Brooks of U.S. District Court did not err in denying Woods and Shelton a trial delay after Paris pleaded guilty, the court also ruled. "First, a co-defendant's last-minute decision to plead guilty generally is foreseeable," the court ruled. Second, Woods and Shelton had received abundant time to prepare for trial. Third, Paris did not testify against Woods or Shelton.

The appeals court also rejected claims Brooks had any conflicts of interest in the case or treated the defense unfairly.