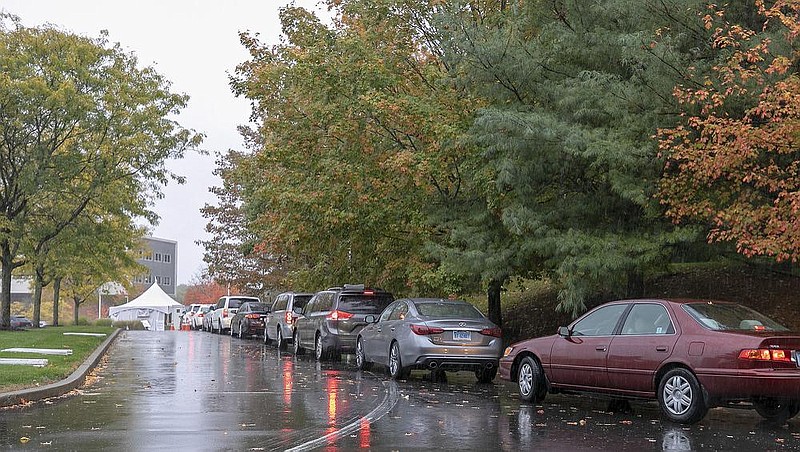 Motorists line up for drive-thru coronavirus testing Friday at MidState Medical Center in Meriden, Conn. Hartford HealthCare, the parent company of MidState, has had a sudden spike in testing demand at all its centers, according to a Hartford HealthCare spokeswoman. (AP/Record-Journal/Dave Zajac)

The chief executive of Pfizer said Friday that the company would not apply for emergency authorization of its coronavirus vaccine before the third week of November.

In a statement posted to the company website, the chief executive, Dr. Albert Bourla, said that although Pfizer could have preliminary numbers by the end of October about whether the vaccine works, it would still need to collect safety and manufacturing data that will stretch the timeline to at least the third week of November.

Separately, a large study led by the World Health Organization suggests that the antiviral drug remdesivir did not help hospitalized covid-19 patients, in contrast to an earlier study that made the medicine a standard of care in the United States and many other countries.

Close watchers of the vaccine race had already doubted that Pfizer would be able to meet the requirements of the Food and Drug Administration by the end of this month. But Friday's announcement represents a shift in tone for the company and its leader, who has repeatedly emphasized the month of October in interviews and public appearances.

"This is good, really good," said Dr. Eric Topol, a clinical trial expert at Scripps Research in San Diego who was one of 60 public health officials and others in the medical community who signed a letter to Pfizer urging it not to rush its vaccine.

He said company officials had assured him that a vaccine would most likely not be authorized before the election, but the letter Friday is "even more solid about their not being part of any political machinations."

Bourla has pushed back against any suggestion that Pfizer's vaccine timeline was politically motivated. In September, Pfizer was the driving force behind a pledge by nine vaccine companies to "stand with science" and not put forward anything that had not been properly vetted.

Earlier this month, he published an open letter to employees that said he "would never succumb to political pressure" and expressing disappointment that "we find ourselves in the crucible of the U.S. presidential election."

Pfizer is one of four companies testing a coronavirus vaccine in late-stage clinical trials in the United States, and it has been the most aggressive in its timeline estimates. Moderna, AstraZeneca and Johnson & Johnson have said that later in the year is more likely, matching the predictions of federal health officials. AstraZeneca and Johnson & Johnson's trials have been paused for potential safety concerns, which could further delay their outcomes.

[Video not showing up above? Click here to view » https://www.youtube.com/watch?v=UDlHSsurqS4]

In interviews, Bourla has said that he expects a "conclusive readout" by late October, with an application for emergency authorization that could be filed "immediately."

Pfizer's trial of 44,000 volunteers tests the vaccine by giving one group the vaccine, another group the placebo, and waiting until a certain number of people become infected with the virus. If significantly more people who received the placebo got infected, then the vaccine is considered to be effective.

A company spokeswoman said last month that Pfizer would not be anywhere near completion of its trial by the end of October and that when Bourla had referred to a "conclusive readout," he meant it was possible the outside board of experts monitoring the trial would have by that date found promising signs that the vaccine works.

In his statement on Friday, Bourla acknowledged those timelines were uncertain. "Since we must wait for a certain number of cases to occur, this data may come earlier or later based on changes in the infection rates."

"In the spirit of candor, we will share any conclusive readout [positive or negative] with the public as soon as practical, usually a few days after the independent scientists notify us," Bourla wrote.

White House spokesman Judd Deere said the Trump administration has expedited development of safe and effective treatments and vaccines that normally would have taken years.

"The President continues to be optimistic that we will have one or more vaccines very soon, before the end of the year," Deere said in an email.

In a tweet on Oct. 6, Trump accused the FDA of having a political agenda with the recommendations, which he said "make it more difficult for them to speed up vaccines for approval before Election Day." Trump called it a "political hit job."

In a video he posted from the White House a day later, Trump said that a vaccine should be available before the election, "but frankly, the politics gets involved."

"They want to play their games," he said. "It's going to be right after the election."

The results on the drug remdesivir study announced Friday do not negate the previous ones, and the WHO study was not as rigorous as the earlier one led by the U.S. National Institutes of Health. But they add to concerns about how much value the pricey drug gives because none of the studies have found it can improve survival.

The drug has not been approved for covid-19 in the U.S., but it was authorized for emergency use after the previous study found it shortened recovery time by five days on average. It's approved for use against covid-19 in the United Kingdom and Europe, and is among the treatments Trump received when he was infected earlier this month.

The WHO study involved more than 11,000 patients in 30 countries. About 2,750 were randomly assigned to get remdesivir. The rest got either the malaria drug hydroxychloroquine, the immune-system booster interferon, the antiviral combo lopinavir-ritonavir, or just usual care. The other drugs have largely been ruled out for covid-19 by previous studies, but not remdesivir.

Death rates after 28 days, the need for breathing machines and time in the hospital were relatively similar for those given remdesivir versus usual care.

The results have not been published in a journal or reviewed by independent scientists, but were posted on a site researchers use to share results quickly.

While one nursing home industry group endorsed the administration's effort, another one was guarded in its reaction.

Under the voluntary program, trained staff from CVS and Walgreens would deliver the vaccines to each nursing home and administer shots. Assisted-living facilities and residential group homes can also participate. Nursing home staffers can be vaccinated, too, if they have not already received their shots. Needles, syringes and other necessary equipment will be included.

The idea is to give hard-pressed states an all-inclusive system for vaccinating their most vulnerable residents, said Paul Mango, a senior policy adviser at the Department of Health and Human Services. "We are trying to eliminate all potential barriers to getting folks safe and effective vaccines," Mango said.

The nation has 15,000-16,000 nursing homes, according to the Centers for Disease Control and Prevention. There may be another 20,000-45,000 assisted living facilities and similar kinds of settings for elderly and disabled people.

Separately, rising coronavirus cases in key presidential battleground states a little more than two weeks before Election Day are the latest worry for election officials and voters fearing chaos or exposure to the virus at polling places despite months of planning.

The prospect of poll workers backing out at the last minute because they are infected, quarantined or scared of getting sick has local election officials in Midwest states such as Iowa and Wisconsin opening more early voting locations, recruiting backup workers and encouraging voters to plan for long lines and other inconveniences.

Confirmed virus cases and deaths are on the rise in the swing states of Iowa, Michigan, Minnesota, Pennsylvania, Ohio and Wisconsin.

Wisconsin broke records this week for new coronavirus cases, deaths and hospitalizations, leading to the opening of a field hospital to handle covid-19 patients. Gov. Tony Evers said he plans to activate the Wisconsin National Guard to fill any staffing shortages at election sites.

In Iowa, Scott County Auditor Roxanna Moritz opened additional early voting sites in and around Davenport, the state's third-largest city, to try to reduce the number of people casting ballots on Election Day and to keep the virus from spreading in large precincts.

In some states, voting early still has carried health risks. Voters in Georgia, Texas and elsewhere encountered hours-long lines that required congregating with hundreds of other people this week. In Georgia, nearly a quarter of the workers in a warehouse where Fulton County's election supplies are kept and voting equipment is readied tested positive for covid-19.

In the U.K., Prime Minister Boris Johnson threatened to force the Greater Manchester region into England's most severe level of covid-19 restrictions after local officials refused to accept the government's financial package to implement measures targeting areas with the highest infection rates. Johnson says action is needed as case numbers and hospitalizations are rising rapidly.

London and seven other areas will move into the second-highest risk tier on Saturday, leading to increased restrictions on more than 11 million people.

In Wales, First Minister Mark Drakeford said Friday the government is considering a two or three week circuit break to get the virus under control. A decision is planned for early next week.

"This would be a short, sharp shock to the virus, which could turn back the clock, slowing down its spread and buying us more time and vital capacity in the health service," he said.

And in Northern Ireland, a local lockdown also comes into effect, closing schools for two weeks and bars and restaurants for a month, with the exception of takeout food. 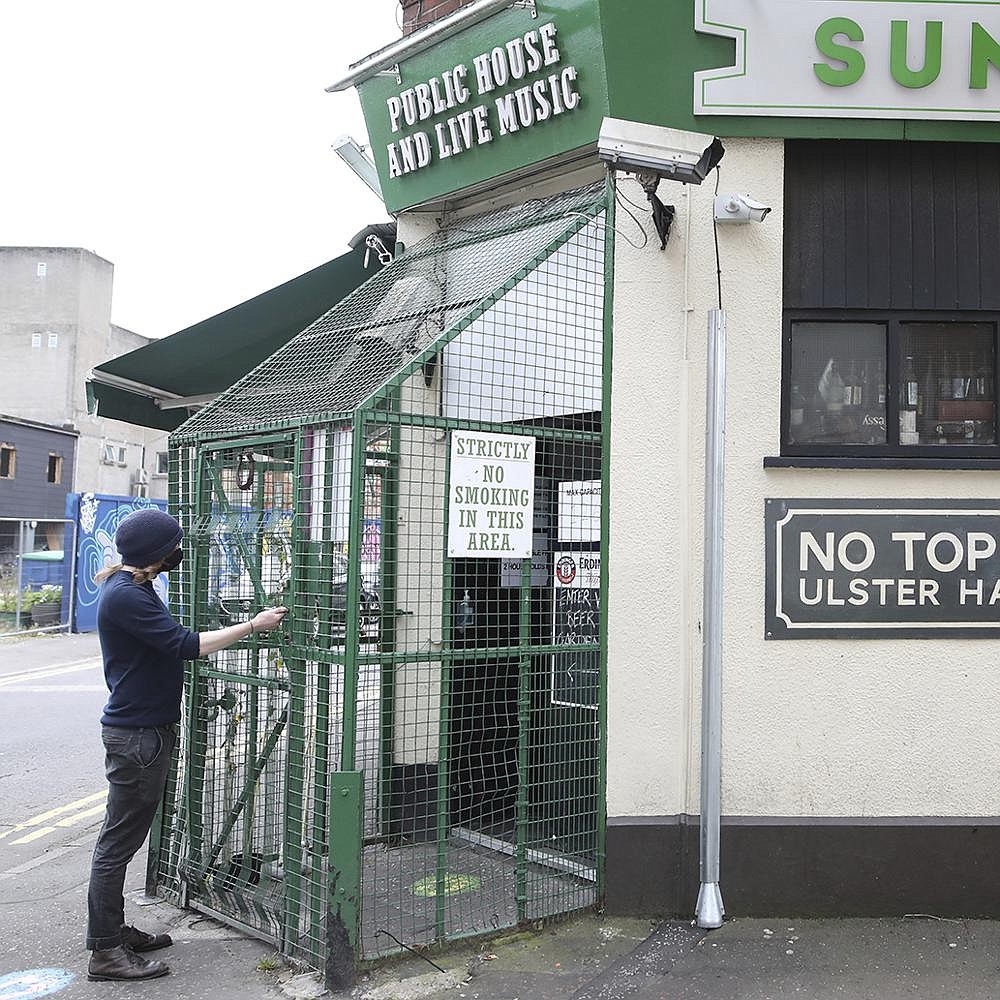 Bob McManus, manager of the Sunflower Public House in Belfast, Northern Ireland, locks up Friday as strict regulations take effect across the country. Bars and restaurants, except for takeout, are closing for a month, schools for two weeks, and funerals and weddings are limited to 25 people for a month. More photos at arkansasonline.com/1017virus/. (AP/Peter Morrison)