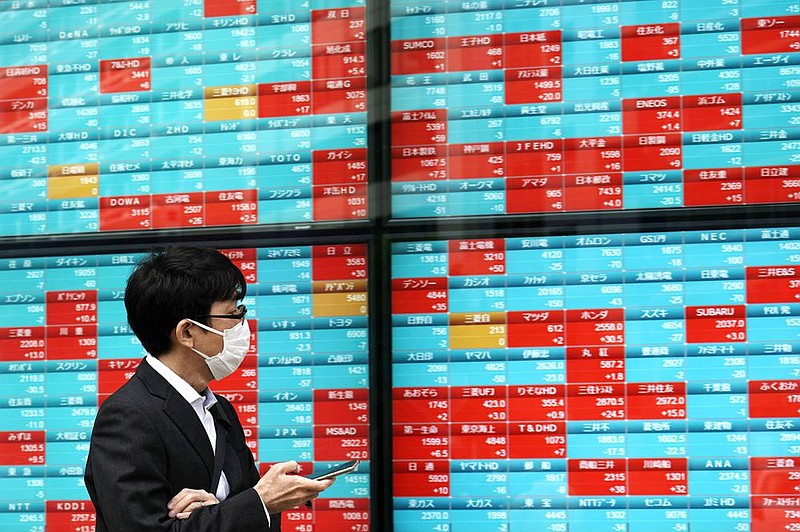 A man checks out stock data for Japan’s Nikkei 225 index on an electronic board at a securities firm Friday in Tokyo. (AP/Eugene Hoshiko)

Wall Street closed out a choppy week of trading with more of the same Friday, as a late-afternoon stumble led U.S. stock indexes to a mixed finish.

The S&P 500 ended the day just a fraction of a point higher after a burst of selling erased a 0.9% gain. Despite a three-day stretch of losses, the benchmark index still managed to finish higher for the week, its third straight weekly gain.

The market had been up for much of the day after the government reported that retail sales rose in September for the fifth straight month. That report appeared to overshadow new data that showed U.S. industrial production had its weakest showing last month since the spring.

The market's late-day fade capped a week of volatility for stocks as companies began reporting their third-quarter results and traders' hopes for a new round of economic stimulus from Washington dimmed.

"The market is sort of bouncing around here," said Tom Martin, senior portfolio manager with Globalt Investments. "We've had a lot of noise lately and that's probably what we're going to have over the next couple of weeks."

Despite the market's downbeat finish, the major stock indexes have already recouped most of their losses from September's market swoon.

Stocks have been mostly climbing this month, but trading became choppy this week as ongoing talks between Democrats and Republicans on an economic stimulus package failed to deliver results. Investors have been hoping that Washington would provide more financial support for the economy since July, when a $600-a-week extra benefit for the unemployed expired.

Traders have been watching economic data closely to see whether the loss of that beefed-up unemployment aid would lead to an overall pullback in spending. On Thursday, the government said the number of Americans seeking unemployment aid increased last week to 898,000, a historically high level that underscores how the economy continues to be hobbled by the pandemic and recession that erupted seven months ago.

"There's a need for stimulus, even though this data is heartening in a way," said Ross Mayfield, an investment strategist at Baird.

Still, given that the Nov. 3 election is fast approaching, the market is not expecting leadership in Washington to deliver an economic stimulus package before voters go to the polls, Mayfield said.

"Now, it's essentially baked in that we probably won't see anything until after the election," he said.

The retail sales report initially juiced shares in retailers and other companies that rely on consumer spending, but most of those gains evaporated by the end of the day.

Other data point to persistent weakness in the economy. The Federal Reserve said Friday that U.S. industrial production fell 0.6% last month, the weakest showing since April's 12.7% skid amid widespread business shutdowns due to the pandemic. Economists had been expecting an increase.

Information for this article was contributed by Yuri Kageyama of The Associated Press.