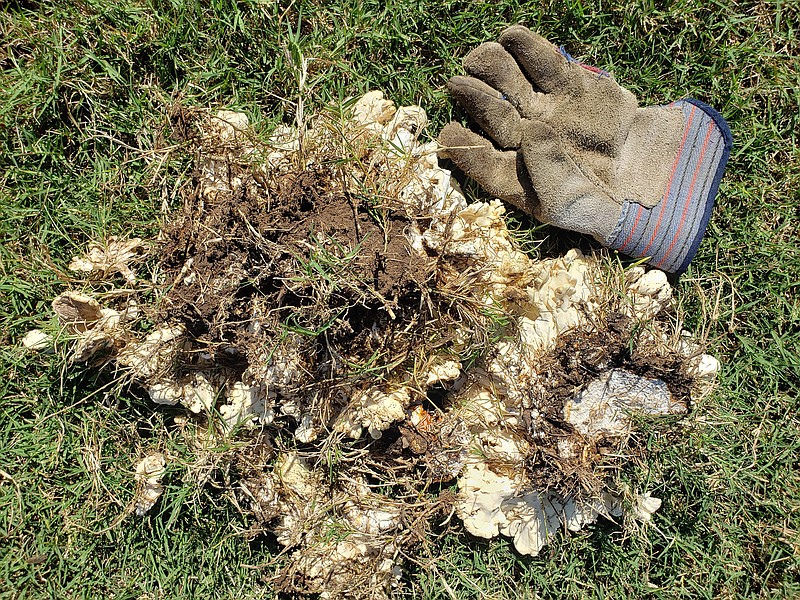 This fungus in a reader's Bermuda lawn is a type that grows from rotting roots where a tree has died. (Special to the Democrat-Gazette)

Q When I married, I insisted my husband and I buy my grandmother's home. It had been in the family since 1960 and came full of history and memories. Ten years later, the 900-square-foot home wasn't large enough for our family of four and we were unable to add on. Sadly, we had to sell the house; the only bright side was that we sold it to a developer who intended to tear down the old house and build a home for his own family. Since the property was being torn down, we went to work salvaging everything we could. That included 10 years' worth of our own landscaping and planting, plus so much more. Late spring, a massive effort to get the plants occurred. In the backyard of our temporary rental, I have a small nursery. In 30-gallon fabric pots, I have two extremely old and mature gardenias that my grandmother loved and made cuttings for others from, as well as a candy stripe camellia that my in-laws brought up from south Louisiana 30 some years ago. I potted several sections of turk's cap that always thrived in Grandma's backyard as well. There is also a Japanese maple (which just recently shows some powdery mildew), several forsythias, hostas galore, hydrangeas, assorted lilies, Shasta daisies, lavender, rosemary, creeping juniper, ferns and a few more various perennials. Everything has thrived in their temporary pots. They all thrived until now! My gardenias are getting yellow leaves. There's no indication of pests on them. However, many of the other plants have small, white, flying insects. Please, wise Janet Carson, what do I do? We have bought the new house one mile away. Should I invest in a small greenhouse? Should I try and find the best locations in the yard and get everything in the ground? If you can't tell, it's Grandma's gardenias that I'm most worried about. They look much different from the other gardenias I've bought and planted over the years. The leaves are large and waxy and typically never drop, but maybe that is because they are so old and mature. Any advice is much appreciated.

A How soon can you get the plants in the ground? The sooner they can be planted, the sooner they can put down roots and the easier they will be to maintain. I have had a lot of questions recently about small, white, gnat-like insects seen when people are watering. I had some on my tropical hibiscus as well. Upon close inspection, they are whiteflies, a common insect pest on gardenias. This late in the year I would not start a spray program but would just continue to water. If you want to spray with an insecticidal soap, that would be a quick help but not full-blown control. Monitor them early next spring to look for problems. Many evergreens — particularly gardenias and azaleas — will shed all their old leaves at once, and they turn yellow before they fall. If it is the older leaves turning yellow, don't worry. I am more concerned about winter hardiness in pots. If you can't plant them in the ground, find a protected spot in the shade and group all the plants together. Mulch around the root balls, and be prepared to water even in the winter — containers dry out much more quickly than plants in the ground. Depending on how cold our winter weather gets, gardenias can get nipped — even with a strong root system. In pots, they are more susceptible. Greenhouses are hard to manage. The smaller they are, the harder it is to regulate temperature, and that can lead to more problems for hardy plants. You might want to have some extra covering for them if the temperatures get really low — sheets, burlap, etc., but not plastic. I know these plants are special, so you also may want to take some cuttings to root for more plants.

Q This weed shows up in our zoysia grass every year. We apply a pre-emerge in February/March of pendimethalin. We have been using a weed-and-feed as well, later in the spring, and the weed usually doesn't emerge until June. It has one root and spreads over the grass. We have sprayed MSMA, and it will kill it along with making brown grass for several weeks. Do you have any ideas? Just to get a start for next year. 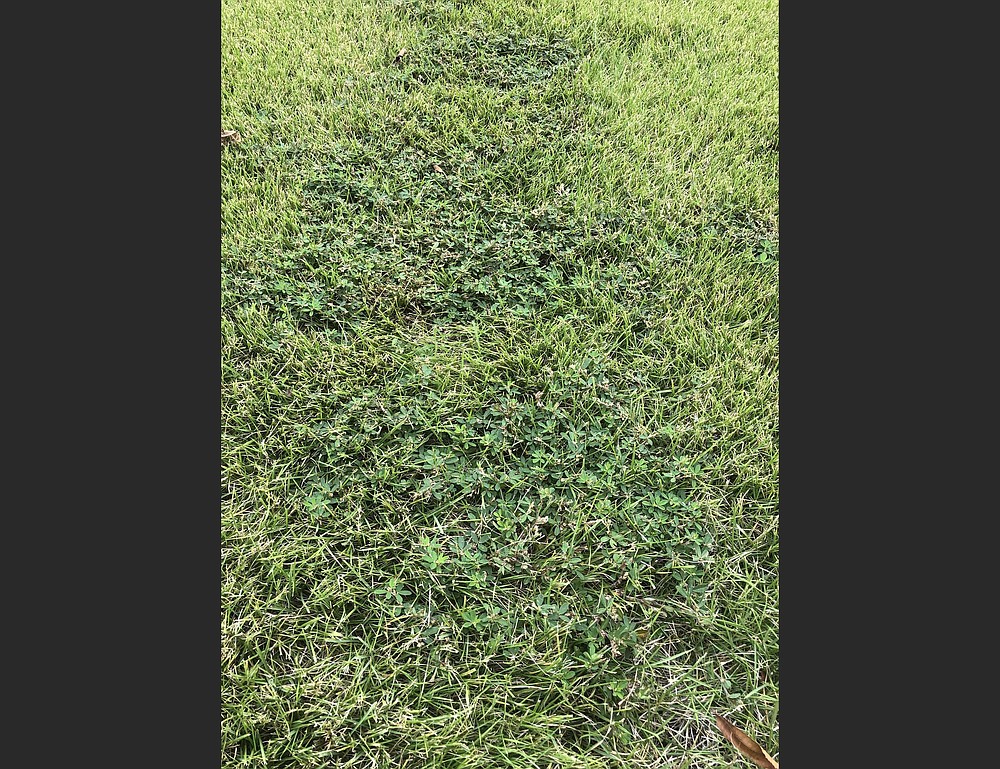 Lespedeza is a vigorous weed with such a low profile mowing doesn't touch it. (Special to the Democrat-Gazette)

A The weed in question is lespedeza. Lespedeza is a very common summer weed that can easily choke out thin lawns. Lespedeza can be an indicator of insufficient nitrogen fertilizer. Have your soil tested. Lespedeza is a low-growing annual weed with tough, wiry stems that forms a mat-like growth. It has dark green, trifoliate leaves (the leaves come in threes). Lespedeza has a semi-woody taproot and because it grows close to the ground it's difficult to cut with a mower. It flowers in late summer with tiny, pink to purple, single flowers found in leaf axils. MSMA will not work on a broadleaf weed — it is only for grass weeds. 2,4-D is a broadleaf herbicide but it alone will not control lespedeza, but in a 3-way mix it is more effective. Ortho Chickweed and Oxalis Killer is a good choice for home gardeners. Do not use this product on centipede, St. Augustine or Bermuda grass.

Q Pictured here are growths I've seen in my Bermuda lawn, in various locations: I've removed perhaps five or six similar this summer, widely dispersed. They are quite firm and firmly rooted among the Bermuda. They come out completely with a pickax, leaving bare soil underneath. I assume they're saprophytic, but there seems to be nothing of that sort to nourish them. What are they, and is there any further action I should take? 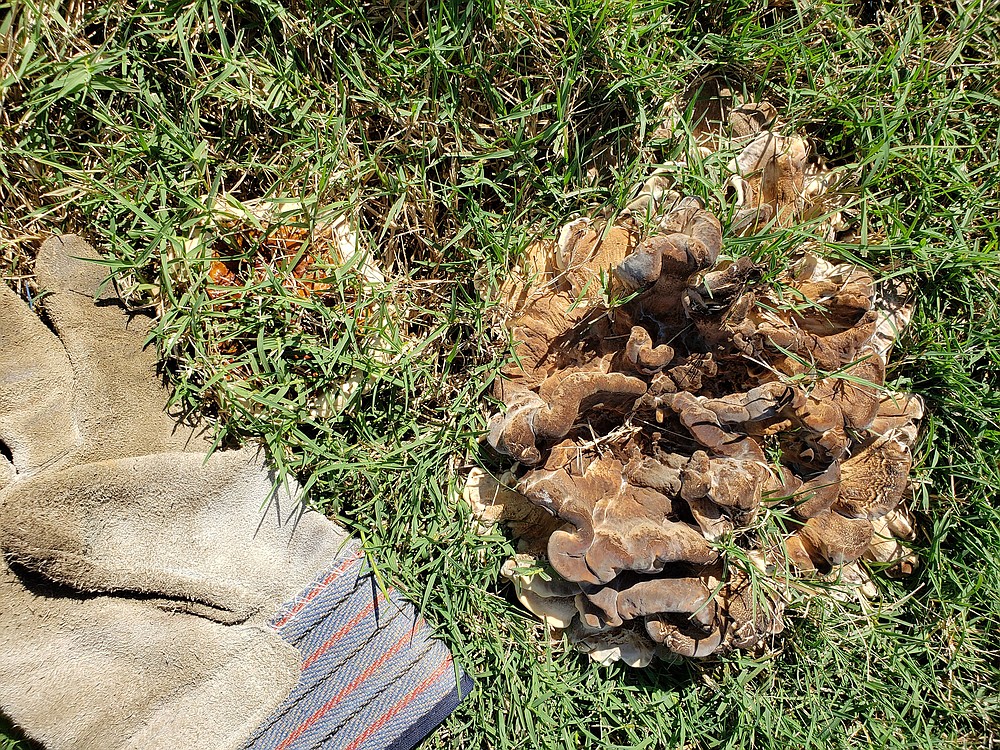 This fungus will appear every so often after rainfall until the remnants of a dead tree rot away. (Special to the Democrat-Gazette)

A Impressive! I would say they are a type of mushroom or fungus called a meripilaceae. It usually grows where a tree has died or decayed. Just keep digging them up when you see them, and eventually, the decayed material should rot away and not leave behind any spores to germinate. I assume they popped up after the last big rains.