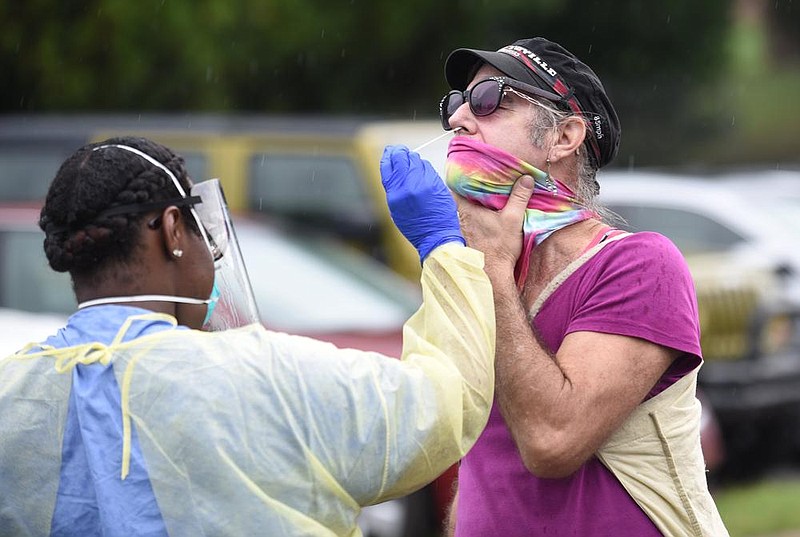 Natasha Cleveland, a health worker with the University of Arkansas for Medical Sciences Northwest Regional Campus, conducts a coronavirus test Thursday on Bobby Morell during a drive-thru clinic on the campus in Fayetteville. The testing was free and available to anyone age 16 and older. Bilingual translators were on-site for Marshallese and Spanish-speaking people. Case totals were down on the campus Thursday, officials said. (NWA Democrat-Gazette/David Gottschalk)

Arkansas' streak of 1,000-plus daily increases in its count of coronavirus cases continued for a third day Friday as the tally grew by 1,015.

The death toll from the virus, as tracked by the state Department of Health, rose by 20, to 1,665.

"Yesterday we saw another new record in our testing efforts," Gov. Asa Hutchinson said in a news release announcing the day's virus numbers.

"With over 15,000 total tests, we can see the results of our investment and commitment to grow Arkansas's testing infrastructure. This weekend is critical as we continue to battle COVID-19. Remember to wear a mask, keep your distance, and wash your hands frequently."

The state's count of cases confirmed through polymerase chain reaction, or PCR, tests rose by 814, to 92,117.

Its tally of "probable" cases, which include those identified through less-sensitive antigen tests, rose by 201, to 5,422.

She said she continues to hear reports of the virus spreading among school sports team members, in places of worship and at funerals, family reunions and other gatherings and where public-health guidelines aren't being followed.

"I think one of the things we could do better than we have been doing is cloth face coverings," she said.

"I think as a state, we're going to have to kind of recommit ourselves to protecting others by each person thinking of themselves as potentially infectious," she added.

It was the first time the state had added 1,000 or more confirmed or probable cases to its count for more than two straight days.

The state's count of deaths among confirmed cases rose to 1,514, while the death toll among probable cases remained unchanged at 151.

The number of people hospitalized in the state with covid-19 fell by four, to 590.

Those patients included 102 who were on ventilators, down from 106 a day earlier.

The number of people who have ever been hospitalized in the state with covid-19 rose by 44, to 6,243.

The number who have ever been on a ventilator rose by four, to 764.

The state's cumulative count of confirmed and probable cases rose to 97,539.

Already at a record level since Wednesday, the number of confirmed or probable cases that were considered active rose by 185, to 8,609.

That reflected the cases that were added Friday minus the 20 deaths, 809 Arkansans who were newly classified as having recovered and one person with an active infection who died of a cause unrelated to covid-19.

Friday's increase came after a record 1,278 cases that were added to the state's tallies on Thursday.

Over a rolling seven-day period, the average number of confirmed and probable cases added to the tallies each day fell from a record 911 as of Thursday to 890.

The Health Department reported Friday that it had received the results of 11,066 PCR tests that were performed Thursday and a total of 3,946 newly reported antigen tests.

That set a record for the number of antigen tests reported in the Health Department's daily coronavirus updates.

The combined total of 15,012 test results also set a record.

Dillaha said many of the antigen tests were from a network of urgent care centers that reported results "from a block of time they hadn't reported before, so that made the numbers for antigen tests especially high."

While most PCR tests are performed in laboratories and reported electronically, antigen tests are usually performed in doctor's offices, which often fax in the results, she said.

The department has set up an electronic portal for health care providers to submit antigen testing results, however, and "many locations are doing that," Dillaha said.

When meeting with other people from different households, she said, Arkansans should take precautions such as meeting outside, wearing masks and keeping a safe distance.

With Thanksgiving coming up next month, she recommended planning gatherings that are "small and intimate."

"Given the increase in the number of cases around the U.S., I would encourage people not to travel this year, and that's hard because many people have gone for months without seeing the people that they love," Dillaha said.

One way to include people who live alone in family gatherings is to use technology to "share a meal remotely," she said.

"It's kind of a crazy idea, but these are crazy times," she said.

The U.S. Centers for Disease Control and Prevention has posted guidance on its website for holiday gatherings that recommends considering factors such as the size of the gathering and the level of virus transmission in the community and in the places where those who will attend live.

Dillaha said the Health Department will likely issue its own guidelines for Thanksgiving get-togethers as it did last week for Halloween activities.

The count of confirmed and probable cases rose Friday by 92 in Pulaski County; 85 in Washington County; 72 in Craighead County; and 67 in Benton County.

Among prison and jail inmates, the count of cases rose by 55.

That age group makes up a quarter of the state's population but accounted for 32% of the cases added to the state tallies on Friday.

The count of virus deaths rose by four in Pulaski County and by two each in Baxter, Craighead, Crawford and Washington counties.

The death toll rose by one each in Cross, Garland, Howard, Independence, Lonoke, Miller, Mississippi, Poinsett and Stone counties.

The Health Department subtracted one death from its count of virus deaths in Pike County, lowering it to two.

Among nursing-home residents, the state's count of virus deaths rose by 15, to 614.

Deer Elementary, part of the Deer-Mount Judea School District in Newton County, announced Friday that it will shift to all virtual instruction for one week, starting Monday.

According to data submitted to the Department of Education, which tracks school modifications related to covid, the school reported six teachers, three support staff and fewer than 10 students who were under quarantine because of proximity to people who tested positive.

"Any student who does not have access to Internet or childcare during the week may come to school, and there will be staff available to monitor those students," the district's website said.

In its daily coronavirus update, the Little Rock School District reported that three students at Central High had tested positive for the virus in the 24-hour period ending at 3 p.m. Friday.

An additional five students and five employees at other schools were required to quarantine, the district said.

At the the University of Arkansas, Fayetteville, the cumulative number of cases among students and employees since Aug. 10 rose by 12, to 1,733, as of Thursday.

The university reported on its website Friday that 43 of the cases were active, up from 41 listed in its last update Wednesday.

Harding University reported 61 active cases among students on Friday, down from 71 a day earlier.

The private Christian university in Searcy also reported having 10 active cases among employees, a number that hadn't changed from a day earlier.

An additional 233 undergraduate students and 30 graduate students or employees were under quarantine after being near someone who had tested positive, according to the university's website.

The University of Arkansas at Little Rock reported five active cases on campus, according to data updated Friday, bringing the cumulative total of cases to 83 since March.

In data updated Fridays, the University of Arkansas at Fort Smith, reported 25 active cases, bringing the cumulative total of positive cases for UAFS to 79 since Aug. 15 when the university began posting data on its website.

Also Friday, Arkansas State University in Jonesboro reported 44 active cases, a slight uptick from the 40 it reported online the day before.

Arkansas Glass Container in Jonesboro and Big Rock KangaRoof in Little Rock were added Thursday to a Health Department list of workplaces with at least five active cases among employees.

Arkansas Glass Container had 11 cases, including eight that were active, according to the Health Department.

Big Rock KangaRoof, which specializes in residential roof replacements, had seven cases, all of which were active.

The list also included Land O'Frost in Searcy and a Tyson Foods plant in Pine Bluff, which were each listed as having seven active cases.

OK Foods in Fort Smith and a Tyson plant in Green Forest were each listed as having six active cases.

The Health Department listed Hytrol Conveyor in Jonesboro and Lennox Industries and Riceland Foods, both in Stuttgart, as having five active cases each. 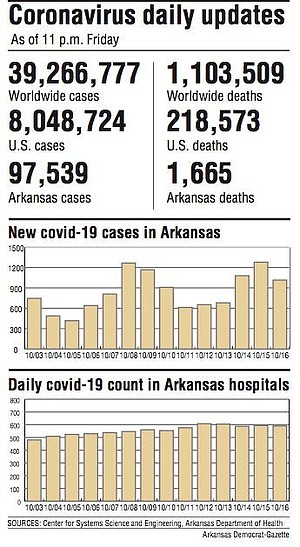