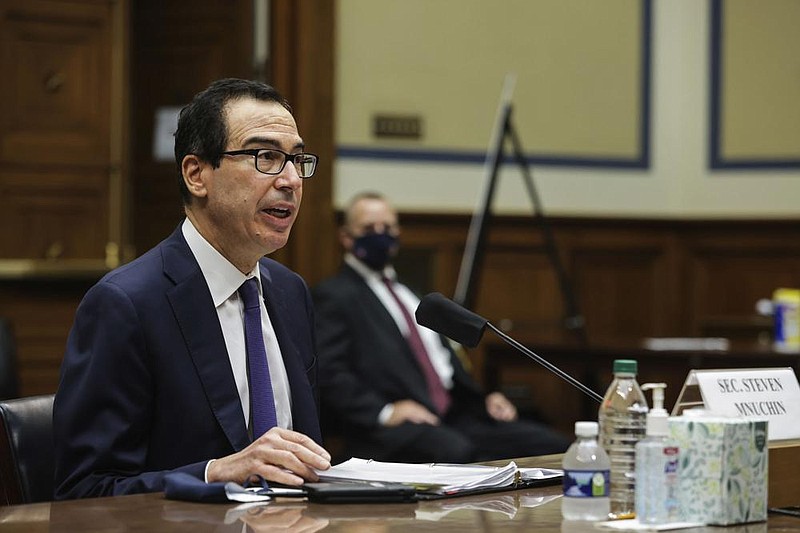 In a statement released Friday with the federal budget deficit report, Treasury Secretary Steven Mnuchin said the Trump administration “remains fully committed to supporting American workers, families and businesses and to ensuring that our robust rebound continues,” despite the inability of negotiators to reach agreement on a new coronavirus relief package. (AP/Graeme Jennings)

WASHINGTON -- The federal budget deficit hit an all-time high of $3.1 trillion in the 2020 budget year, more than double the previous record, as the coronavirus pandemic shrank revenue and sent spending soaring.

The Trump administration reported Friday that the deficit for the budget year that ended on Sept. 30 was three times the size of last year's deficit of $984 billion. It was also $2 trillion higher than the administration had estimated in February, before the pandemic hit.

It was the government's largest annual shortfall in dollar terms, surpassing the previous record of $1.4 trillion set in 2009. At that time, the Obama administration was spending heavily to shore up the nation's banking system and limit the economic damage from the 2008 financial crisis.

The deficit -- which is the gap between government spending and tax revenue -- shows the dramatic surge in spending the U.S. government approved in order to contain the pandemic's fallout earlier this year.

The 2020 deficit, in terms of its relationship to the economy, represented 15.2% of total gross domestic product, the sum of all the goods and services produced by the country. That was the highest level since 1945, when the U.S. was borrowing heavily to finance World War II.

Accumulating deficits add to the overall federal debt, which totaled nearly $27.1 trillion as of Wednesday. That figure includes more than $6 trillion the government owes itself, including about $2.9 trillion borrowed from the Social Security Trust Fund, according to Treasury Department reports.

The administration's final accounting of the 2020 budget year shows that revenue fell by 1.2% to $3.42 trillion, while government spending surged 47.3% to $6.55 trillion. That spending reflects the relief programs Congress passed in the spring to support the economy as millions of Americans were losing their jobs.

Many of the benefit programs expired in late July or early August, and so far Democrats and Republicans have been unable to agree on legislation to reinstate them. Republicans have balked at the level of spending sought by Democrats, who warn that without significant support the country could be facing a double-dip recession.

While about half of the 22 million jobs lost in March and April have been recovered, the concern is that without more government support, those still without work will be unable to make their rent or mortgage payments and buy food. In addition to the human toll, the result would be a significant drag on U.S. economic growth.

President Donald Trump has said he is willing to compromise with Democrats on a new relief package but Senate Republicans have indicated they don't support the spending levels being put forward by Democrats.

"The administration remains fully committed to supporting American workers, families and businesses and to ensuring that our robust rebound continues," Treasury Secretary Steven Mnuchin said in a statement released with the budget report.

Numerous Republican lawmakers have bristled at the federal spending spree in response to the pandemic, and the surging deficit may fuel their reluctance to authorize additional relief. Conservatives alarmed by the deficit also may push hard for its reduction should Democratic presidential nominee former Vice President Joe Biden win the election, setting the stage for a revival of the fierce budget battles that characterized much of the Obama administration.

The joint report from the Treasury Department and the Office of Management and Budget showed that total government receipts of $1.61 trillion were $286 billion lower than the administration had projected in February. That reflected a drop of $203 billion in individual income taxes from the February forecast and a decline of $51.8 billion in corporate income taxes from the February projection.

The $6.55 trillion in spending -- $1.76 trillion higher than the administration's February estimate -- includes the coronavirus relief programs passed by Congress, such as individual economic impact payments of $1,200, expanded weekly unemployment benefits of $600 per week and the Paycheck Protection Program to provide support to small businesses.

Spending by the Small Business Administration, which oversees the Paycheck Protection Program, totaled $577.4 billion this fiscal year, compared with $456 million in 2019.

Despite all the borrowing required to finance the surging deficit, interest payments on the debt actually came in $53.8 billion below the administration's February projection. That was because interest rates were lower than expected this year because of the recession that began in February.

The low interest rates are a key reason economists are not as concerned about the rising debt burden caused by the deficit. The federal deficit is approaching 100% of GDP and is projected to top that amount in 2021.

"It's disappointing to both candidates for president proposing trillions of dollars in additional debt," said Maya MacGuineas, president of the Committee for a Responsible Federal Budget. "The deeper we dig this hole, the harder it will be to claw our way out."

Democrats and Republicans need to "come together and start planning how they will make the tough decisions needed to save Social Security and Medicare and stop our massive debt from spiraling out of control once the crisis is over and the economy has recovered," MacGuineas said in a statement on Oct. 8.

For its part, the Federal Reserve unleashed a huge monetary policy effort to get the economy back on its feet. The central bank cut the benchmark interest rate to near zero in March and expects to keep borrowing costs very low likely for years to come.

Fed Chairman Jerome Powell last week warned of a tepid recovery without additional government aid and said providing too much stimulus wouldn't be a problem.

Powell and other Fed officials say now isn't the time to worry about the deficit because unemployment remains high and the pandemic has crushed many businesses. But over the long term, it's a potential concern because it could crowd out private investment and in extreme cases spark inflation that risks diminishing the value of the U.S. dollar, the world's reserve currency.

Spending on the national defense went from the second-largest outlay in fiscal 2019 to fifth in 2020 as pandemic-induced spending resulted in larger spending for income security, health and Medicare.

On Wednesday, Trump told the New York Economic Club that reducing the federal debt would be a priority of his second administration even as he urges Congress to spend more than $1.8 trillion on an additional relief package.

Trump also said faster economic growth would erase the U.S. debt burden, although budget experts say spending cuts or tax increases would be necessary to do so.

Information for this article was contributed by Martin Crutsinger of The Associated Press; by Vince Golle of Bloomberg News; and by Jeff Stein and Andrew Van Dam of The Washington Post. 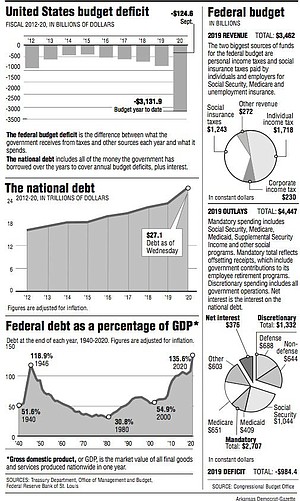