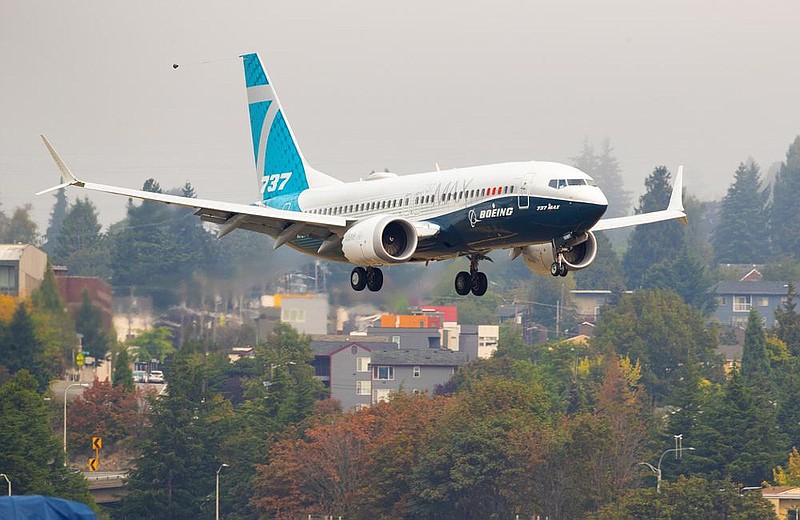 A Boeing 737 Max lands at Boeing Field in Seattle after a test flight in September. The European Union Aviation Safety Agency is preparing to draft an airworthiness directive for the Max that it expects to issue next month. (The Seattle Times/Mike Siegel)

Europe's top aviation regulator said he's satisfied that changes to Boeing Co.'s 737 Max have made the plane safe enough to return to the region's skies before 2020 is out, even as a further upgrade his agency demanded won't be ready for up to two years.

After test flights conducted in September, the European Union Aviation Safety Agency is performing final document reviews ahead of a draft airworthiness directive it expects to issue next month, said Patrick Ky, executive director of the agency.

That will be followed by four weeks of public comment, while the development of a so-called synthetic sensor to add redundancy will take 20 to 24 months, he said. The software-based solution will be required on the larger Max 10 variant before its debut targeted for 2022, and retrofitted onto other versions.

"Our analysis is showing that this is safe, and the level of safety reached is high enough for us," Ky said in an interview. "What we discussed with Boeing is the fact that with the third sensor, we could reach even higher safety levels."

[Video not showing up above? Click here to view » https://www.youtube.com/watch?v=n0n4SUxFqrg]

The comments mark the firmest endorsement yet from a major regulator of Boeing's goal to return its beleaguered workhorse to service by year-end, following numerous delays and setbacks. The Max, the latest version of the venerable 737 narrow-body, was grounded in March 2019 in the wake of two accidents that took 346 lives, setting into motion a crisis that's cost Boeing billions of dollars and then-Chief Executive Officer Dennis Muilenburg his job.

While the U.S. Federal Aviation Administration, Boeing's main certification body, is further along in its review, it has held back from making predictions about the timing. FAA chief Steve Dickson flew the Max late last month and said the plane's controls felt "very comfortable," but the review process wasn't complete.

The FAA must act before the European safety officials and other agencies around the world can lift the grounding, under international law. Boeing hasn't submitted its final package of documentation including software audits and safety assessments, said a person familiar with the process who wasn't permitted to speak publicly. The submissions are expected soon.

Boeing shares climbed 1.88% to $167.33 Friday in New York trading. Through Thursday, the shares had lost half their value this year, recording the biggest decline on the Dow Jones Industrial Average.

Key suppliers also advanced on the news, with engine maker General Electric Co. jumping 6.1% to $7.29 for the biggest gain in the S&P 500 index. Spirit AeroSystems Holdings Inc., which manufactures fuselages, rose 3% to $19.23.

Ky said the synthetic sensor would simplify the job of pilots when one or both of the mechanical angle-of-attack sensors on the Max fails. The device, which monitors whether a plane is pointed up or down relative to the oncoming air, malfunctioned in both crashes -- the first off the coast of Indonesia in October 2018, and the second five months later in Ethiopia.

"We think that it is overall a good development which will increase the level of safety," Ky said. "It's not available now and it will be available at the same time as the Max 10 is expected to be certified."

The Max episode strained the rapport between the FAA and global aviation safety agencies, which acted faster to bench the jet and have made demands that go beyond U.S. requirements to clear its return. Ky said the relationship between the European agency, home regulator to Boeing rival Airbus SE, and its U.S. counterpart needs to be rebuilt in a way that enhances safety while not slowing progress.

"For the FAA, the Max accident has been a tragedy," he said. "In terms of the way in which they perceive their own roles, the way they were attacked by different stakeholders in the U.S., the way they have been criticized, it must have been extremely difficult."

The FAA's relationship with Boeing has also shifted, after the plane maker was accused of hiding changes that magnified the differences between the Max and previous 737 models in order to reduce costs and minimize training requirements.

While Ky's comments are positive for Boeing and its suppliers like Safran SA and Spirit AeroSystems, the airframe maker "still has a mammoth task on its hands," said Jeremy Bragg, an analyst at Redburn.

In addition to returning the aircraft to service, Boeing must also unwind inventories of about 450 Max jets that have been built but are awaiting delivery to customers, he said. "This must be achieved against a backdrop of very weak underlying demand, due to covid-19, which will almost inevitably result in very weak pricing on the Max for the next few years."