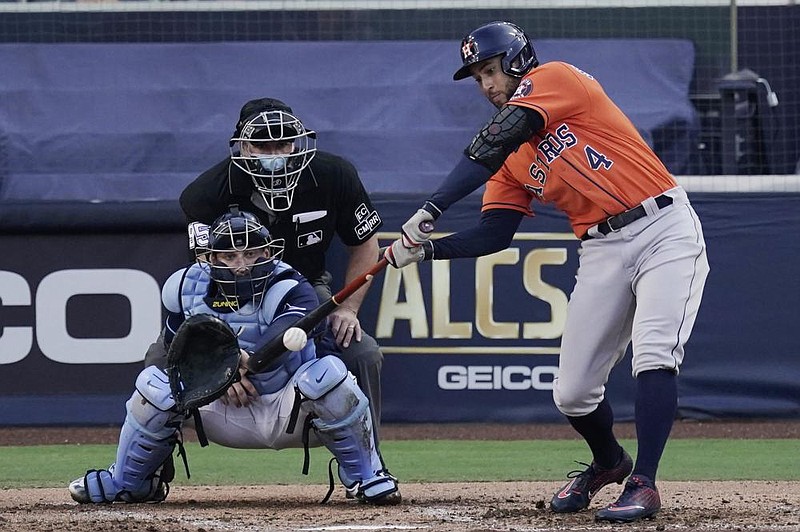 George Springer of the Houston Astros connects for the go-ahead, two-run single in a 7-4 victory against the Tampa Bay Rays in Game 6 of the American League Championship Series on Friday in San Diego. Houston won its third game in a row to tie the series at 3-3. (AP/Jae C. Hong)

The Astros are one win away from their third World Series in four seasons and joining the 2004 Boston Red Sox as the only teams to rally from a 3-0 deficit to win a seven-game series. The Red Sox stunned the New York Yankees to win the ALCS before winning their first World Series in 86 seasons.

Otherwise, big-league clubs leading 3-0 in a best-of-seven postseason series are 37-1.

Houston is also trying to become the first team to win a pennant with a losing regular-season record (29-31). The Astros have been criticized for their role in a cheating scandal en route to the 2017 title that was uncovered last offseason.

"We're not through writing history," Astros Manager Dusty Baker said. "We're hoping we can have a happy ending to this historic season and historic year.

"This team's battled back big time. You've got to love this team, or some people hate this team, but I mean you've at least got to respect this team, the way that they've worked."

Manuel Margot homered twice and drove in three runs for the Rays. Despite blowing a 3-0 series lead, they remain one win away from the second World Series in franchise history -- and one loss from joining the 2004 Yankees in ignominy.

Game 7 tonight will feature the pitchers who started and finished Houston's Game 7 win against the Los Angeles Dodgers in the 2017 World Series. Lance McCullers Jr. will go for the Astros while 36-year-old Charlie Morton is expected to start for the Rays.

In the decisive Game 7 in 2017, McCullers started and went 2 1/3 scoreless innings while Morton pitched the final four innings for the victory. Morton signed with Tampa Bay prior to the 2019 season.

It's also a rematch of Game 2 of this series, won 4-2 by Morton and the Rays.

"We've just got to bounce back," Rays Manager Kevin Cash said. "This isn't the scenario that we wanted leading 3-0, but this is a resilient group. Encouraged that the offense kind of got going there. Look for some carryover.

"There's no doubt the momentum has shifted, but I would bet on this team being very capable of bouncing back."

Valdez, who lost the opener of this series 2-1 to Snell, held the Astros to 1 run and 3 hits while striking out 9 and walking 3 in his third career postseason start. He allowed Willy Adames RBI double in the second.

Astros closer Ryan Pressly pitched for the third consecutive day and got three outs for his second save to go with a win in Game 5. He allowed Yoshitomo Tsutsugo's one-out single, then induced Mike Brosseau's game-ending double-play grounder, a call upheld in a video review. Pressly threw nine pitches, all for strikes, raising his three-day total to 39.

The 71-year-old Baker, who led NL teams for the first 22 seasons of his 23-year managerial career, used some old-school baseball to outfox his younger counterpart, 42-year-old Cash, to overturn a 1-0 deficit in the fifth. The rally had only one hard-hit ball. The Astros had been frustrated in the first three games when they scalded balls right to fielders.

Snell walked Yuli Gurriel opening the fifth and allowed a single to Aledmys Diaz on his 82nd pitch. Cash, whose team was built around analytics, pulled Snell before he could face the No. 9 batter, catcher Martín Maldonado, and leadoff hitter Springer, who had struck out twice.

Maldonado laid down a sacrifice bunt against Diego Castillo, and Springer punched a two-run single to center through a hole in Tampa Bay's drawn-in infield that was also in a shift. Altuve followed with a double into the left-field corner that brought in Springer, who might have been out if Brandon Lowe had thrown to the cutoff man instead of second base.

After Michael Brantley walked, Correa singled to left to bring in Altuve.

Baker, hired after AJ Hinch was fired following the revelation of the sign-stealing scandal, is the first manager to take five different teams to the playoffs. He has yet to win a World Series as a manager. His San Francisco Giants reached the 2002 Fall Classic before losing in seven games to the Angels. As a player, he helped the Los Angeles Dodgers win the World Series in 1981 against the New York Yankees.

Houston's Kyle Tucker homered off rookie Shane McClanahan leading off the sixth. In the seventh, Brantley hit an RBI single and Tucker a sacrifice fly.

Margot homered off Andre Scrubb leading off the Rays' seventh and hit a two-run shot off Cristian Javier with two outs in the eighth. 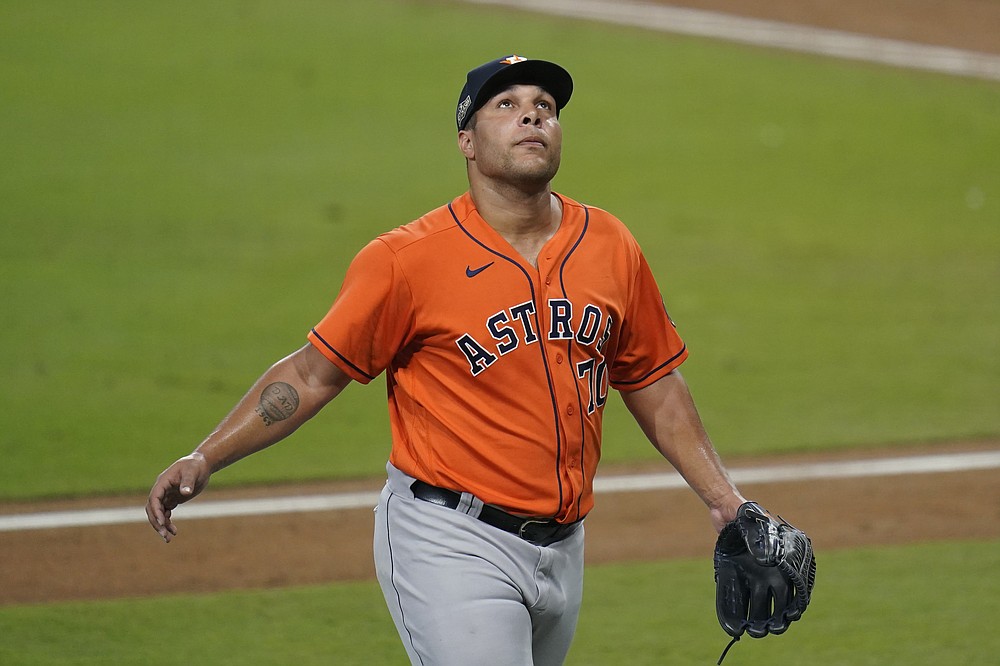 Houston Astros pitcher Andre Scrubb walks off after being relieved during the seventh inning in Game 6 of a baseball American League Championship Series against the Tampa Bay Rays, Friday, Oct. 16, 2020, in San Diego. (AP Photo/Gregory Bull) 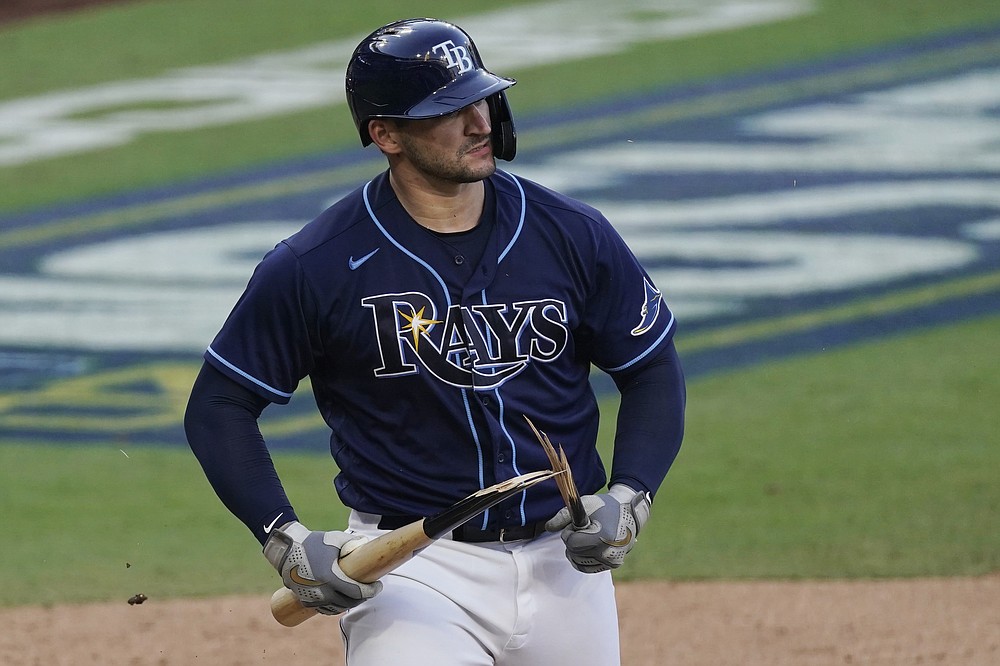 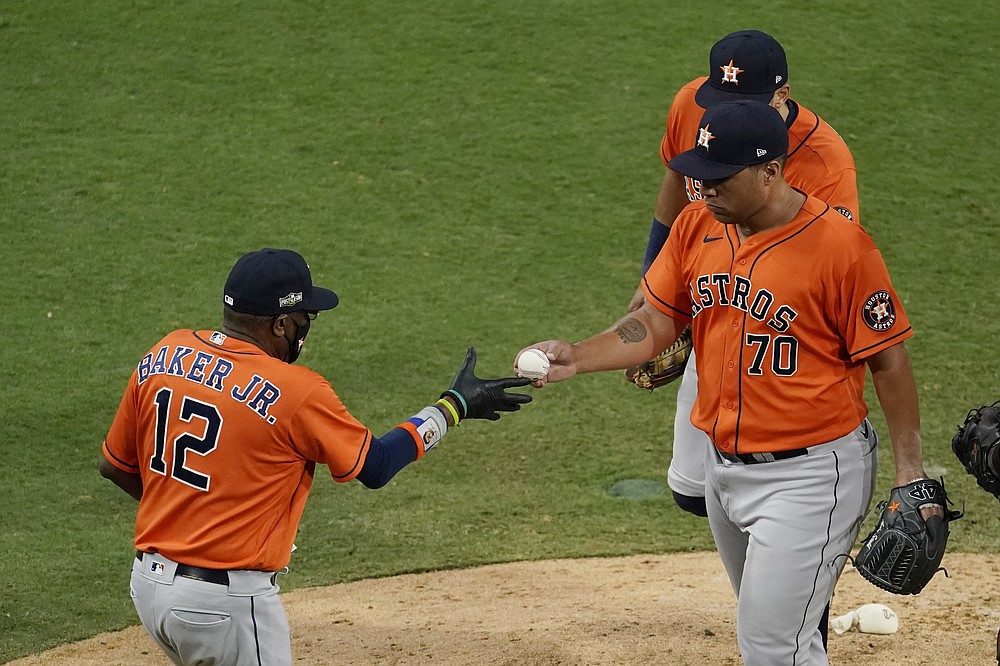 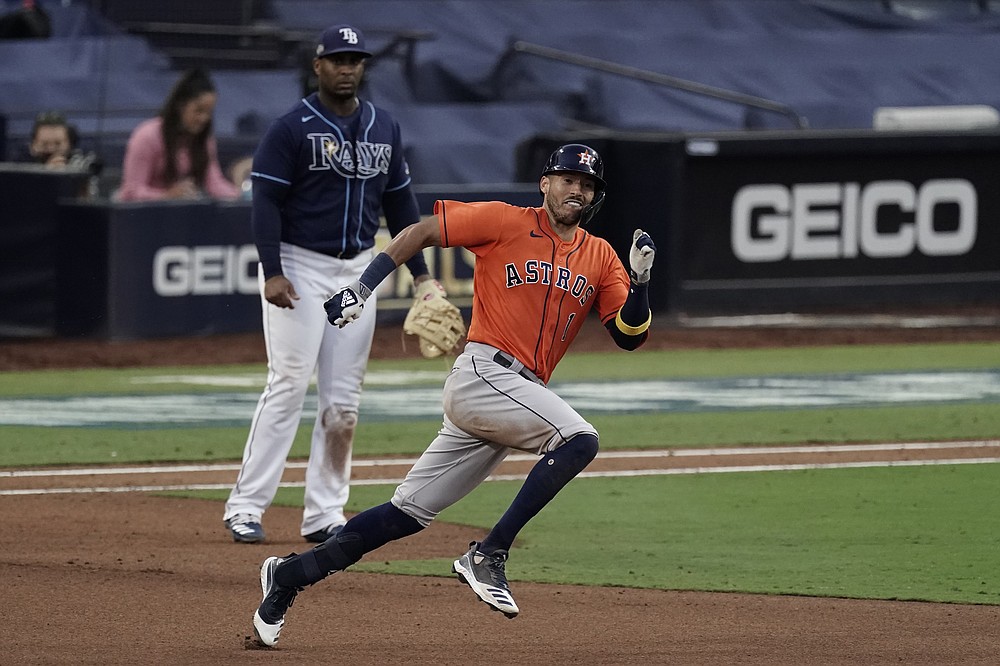 ARLINGTON, Texas — Dodgers catcher Will Smith hit a go-ahead, three-run home run off the Atlanta reliever with the same name, Corey Seager homered twice and Los Angeles avoided elimination with a victory over the Braves in Game 5 of the NL Championship Series.

Smith connected in the sixth against — of all people — Will Smith, the fourth of six Braves pitchers in their bullpen night that started with a couple of postseason firsts by A.J. Minter. Atlanta is looking to get into the World Series for the first time since 1999.

Mookie Betts got that decisive sixth started with an infield single, and the first-year Dodger and former AL MVP had a running, shoestring catch in right field that turned into an inning-ending double play. His catch-and-throw took an Atlanta run off the board after a replay challenge right before Seager’s first home run.

Game 6 is today, with a pitching rematch from the series opener: lefty Max Fried for the Braves and right-hander Walker Buehler for the Dodgers. Both gave up one run in Game 1, which Atlanta won 5-1 after a four-run ninth.

Blake Treinen, the third of seven Dodgers pitchers and the Game 1 loser in relief, pitched two perfect innings for the win. Inconsistent closer Kenley Jansen struck out the side in a non-save situation to end it.

Betts had a stolen base after his sixth-starting single before Justin Turner’s one-out hard grounder that got Betts caught in a rundown. The Braves then brought in their lefty named Will Smith to face left-handed batter Max Muncy, who drew a walk before the Dodgers’ catcher named Will Smith hit a full-count pitch 404 feet to left-center for a 4-2 lead.

All games on TBS