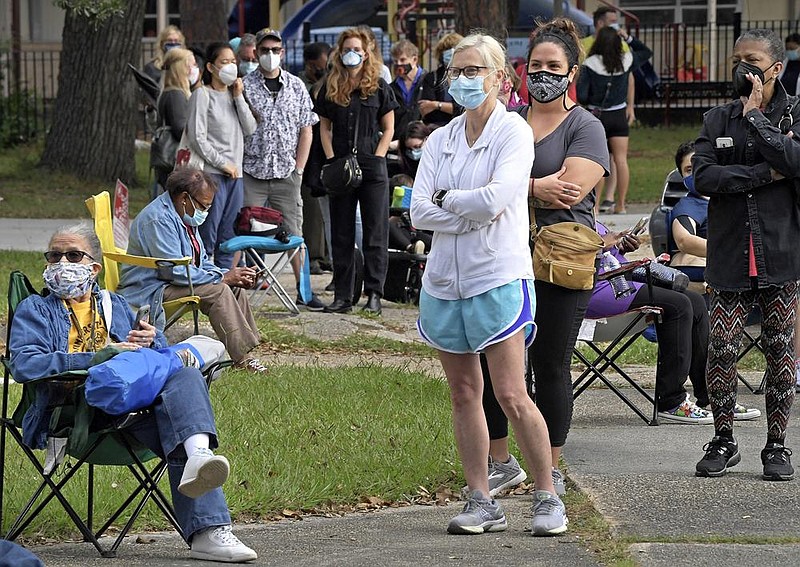 More than 22 million Americans already have cast ballots in the 2020 election, a record-shattering avalanche of early votes driven by a pandemic that has transformed the way the nation votes.

As of Friday afternoon, about 110,000 people had applied for absentee ballots in Arkansas and about 60,000 had returned theirs to county clerks' offices, according to the secretary of state's office. By comparison, in 2016, the last presidential election year, about 42,000 voted absentee.

The nationwide 22.2 million ballots submitted as of Friday night represents 16% of all the votes cast in the 2016 presidential election, even as eight states are not yet reporting their totals and voters still have more than two weeks to cast ballots.

Americans' rush to vote is leading election experts to predict that a record 150 million votes may be cast and turnout rates could be higher than in any presidential election since 1908.

[Video not showing up above? Click here to view » https://www.youtube.com/watch?v=ioFu6_5xRHk]

"It's crazy," said Michael McDonald, a University of Florida political scientist who has long tracked voting for his site ElectProject.org. McDonald's analysis shows roughly 10 times as many people have voted compared with this point in 2016.

"We can be certain this will be a high-turnout election," McDonald said.

So far the turnout has been lopsided, with Democrats outvoting Republicans by a 2-to-1 ratio in the 42 states included in The Associated Press count. Republicans have been girding for this early Democratic advantage for months, as they've watched President Donald Trump rail against universal mail-in ballots and raise concerns about fraud.

In many critical battleground states, Democrats have "banked" a chunk of their voters and can turn their time and money toward harder-to-find infrequent voters.

But it does not necessarily mean Democrats will lead in votes by the time ballots are counted. Both parties anticipate a swell of Republican votes on Election Day that could, in a matter of hours, dramatically shift the dynamic.

"The Republican numbers are going to pick up," said John Couvillon, a GOP pollster who is tracking early voting. "The question is at what velocity, and when?"

Couvillon said Democrats cannot rest on their voting lead, but Republicans are themselves making a big gamble. A number of factors, from rising virus infections to the weather, can impact in-person turnout on Election Day. "If you're putting all your faith into one day of voting, that's really high risk," Couvillon said.

That's why Trump's campaign and party are encouraging their own voters to cast ballots by mail or early and in-person. The campaign, which has been sending volunteers and workers into the field for months despite the pandemic, touts a swell in voter registration in key swing states like Florida and Pennsylvania -- a sharp reversal from the usual pattern as a presidential election looms.

But it's had limited success in selling absentee voting. In key swing states, Republicans remain far less interested in voting by mail.

"This is all encouraging, but three weeks is a lifetime," Democratic data strategist Tom Bonier said of the early-vote numbers. "We may be midway through the first quarter and Democrats have put a couple of points on the board."

The large amount of voting has occurred without any of the violent skirmishes at polling places that some activists and law enforcement officials feared.

It has featured high-profile errors -- 100,000 faulty mail ballots sent out in New York, 50,000 in Columbus, Ohio, and a vendor supplying that state and Pennsylvania blaming delays in sending ballots on overwhelming demand.

There have been extraordinary lines and hourslong wait times in Georgia, Texas and North Carolina as they've opened in-person early voting. The delays were largely a result of insufficient resources to handle the surge, something advocates contend is a form of voter suppression.

In California, less than two weeks since mail-in ballots were sent to every registered voter, officials announced this week that more than 1.5 million mail-in ballots had already been returned.

That means roughly 7% of the 21 million ballots that were sent out earlier this month have been processed. For perspective, there were just 150,000 returned ballots at the same point in time during the 2016 presidential election.

This is surely a record, but this is a year for unprecedented changes.

"We have more vote-by-mail ballots out there than we ever have," said Mindy Romero, director of the Center for Inclusive Democracy at the University of Southern California. "That being said, we are seeing huge numbers that don't seem to be explained by simply the amount of additional vote-by-mail ballots that are out there."

Romero attributes the flood of ballots to a few factors. For one, she surveyed eligible voters in California and found that 14% of respondents were concerned about becoming infected with the coronavirus if they were to vote in person at a polling site. For Black residents, that number was twice as high.

In addition, worries about Postal Service delays might have spurred people to cast their ballots as soon as possible. That would leave plenty of time for ballots to make it through the mail and for officials to review ballots for discrepancies.

Right now, there is no indication of whether the return numbers will continue to accrue at a high pace or if they will tail away after an early rush.

Republicans argue that these signs of enthusiasm are meaningless -- Democratic early voters are people who would have voted anyway, they say. But an AP analysis of the early vote shows 8% of early voters had never cast a ballot before, and 13.8% had voted in half or fewer of previous elections for which they were eligible.

Mail ballots so far have skewed toward older voters, with half coming from voters over age 64. Traditionally, younger and minority-group voters send their mail ballots in closer to Election Day or vote in person.

The mail ballots already returned in several states dwarf the entire total in previous elections. In Wisconsin, more than five times as many mail ballots have been cast compared with the entire number in 2016. North Carolina has seen nearly triple the number so far.

Tunde Ezekiel, a 39-year-old lawyer and Democrat who voted Thursday in Atlanta, said he wanted to be certain he had a chance to oust Trump from office: "I don't know what things are going to look like on Election Day. ... And I didn't want to take any chances."

The obvious enthusiasm among Democrats has cheered party operatives, but they note that it's hard to tell which way turnout will eventually fall. Republicans may be just as motivated, but saving themselves for Election Day.

"High turnout can benefit either side," Bonier said. "It just depends."

Information for this article was contributed by Nicholas Riccardi, Angeliki Kastanis, Kate Brumback and Pia Deshpande of The Associated Press; by Marie Tae McDermott of The New York Times; and by Alyson Hoge of The Arkansas Democrat-Gazette. 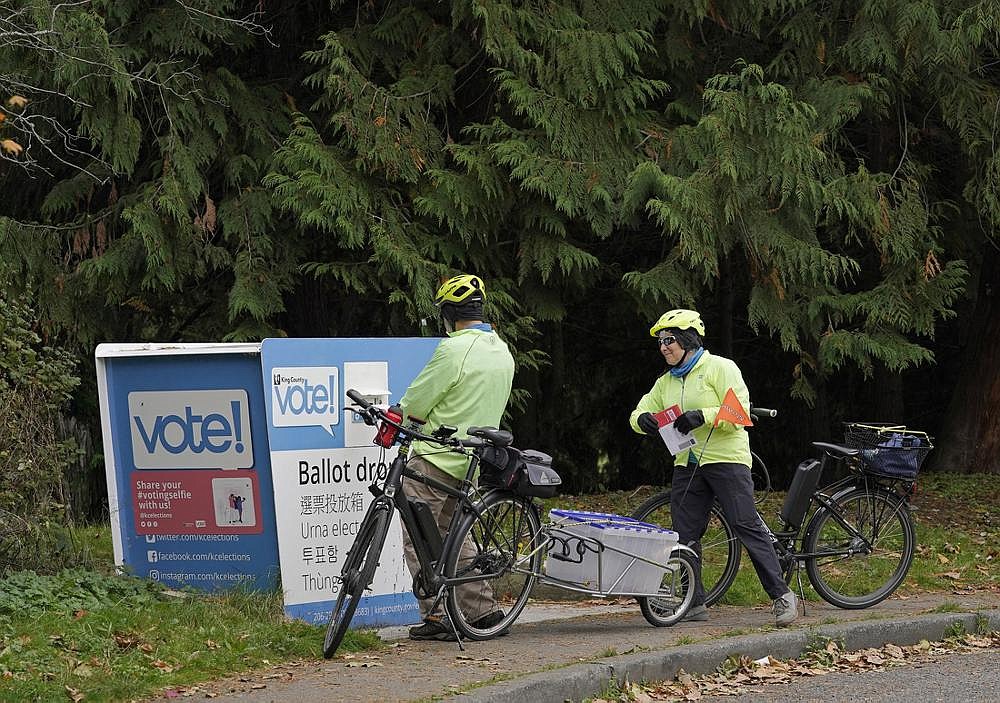 Two people out for a bike ride put their ballots in an outdoor drop box Friday near Gas Works Park in Seattle. Washington is a vote-by-mail state, but ballots also can be deposited at drop boxes, which opened this week in the Seattle area. (AP/Ted S. Warren) 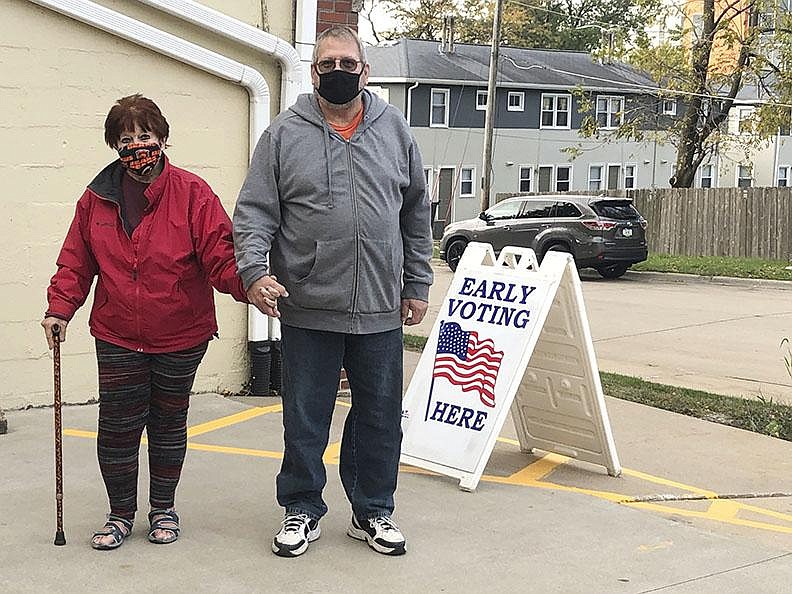 Tim and Pat Tompkins arrive to vote early Friday in Bettendorf, Iowa. The couple said they were concerned about coronavirus exposure in bigger crowds but were determined to vote, and carried their own hand sanitizer. (AP/Geoff Mulvihill) 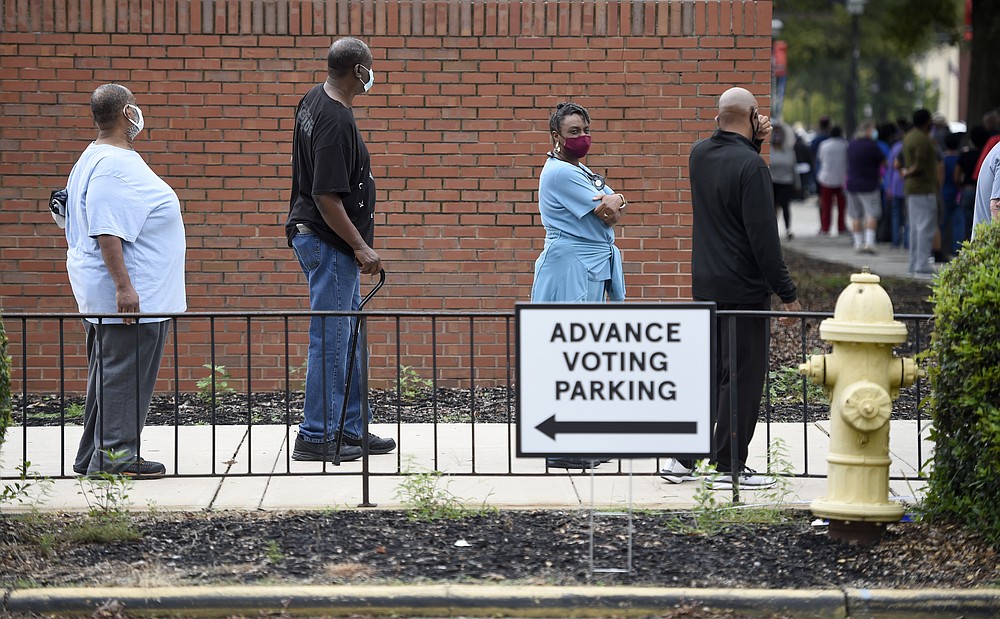 Monday was the first day for advance voting in Georgia and people showed up by the hundreds to cast their ballot early at the Bell Auditorium in Augusta, Ga., Monday, Oct. 12, 2020 (Michael Holahan/The Augusta Chronicle via AP) 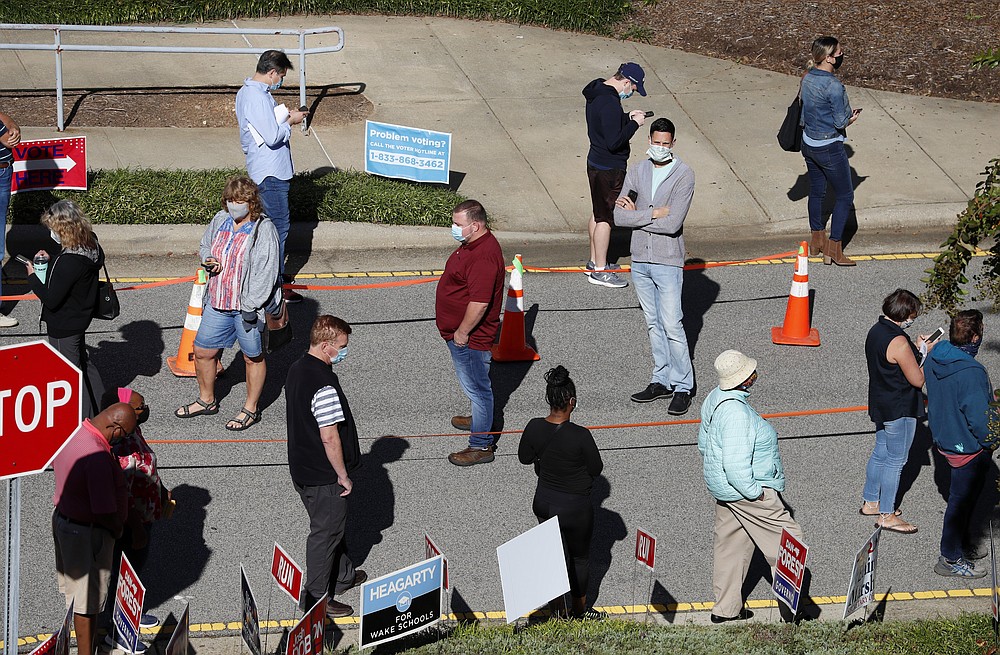 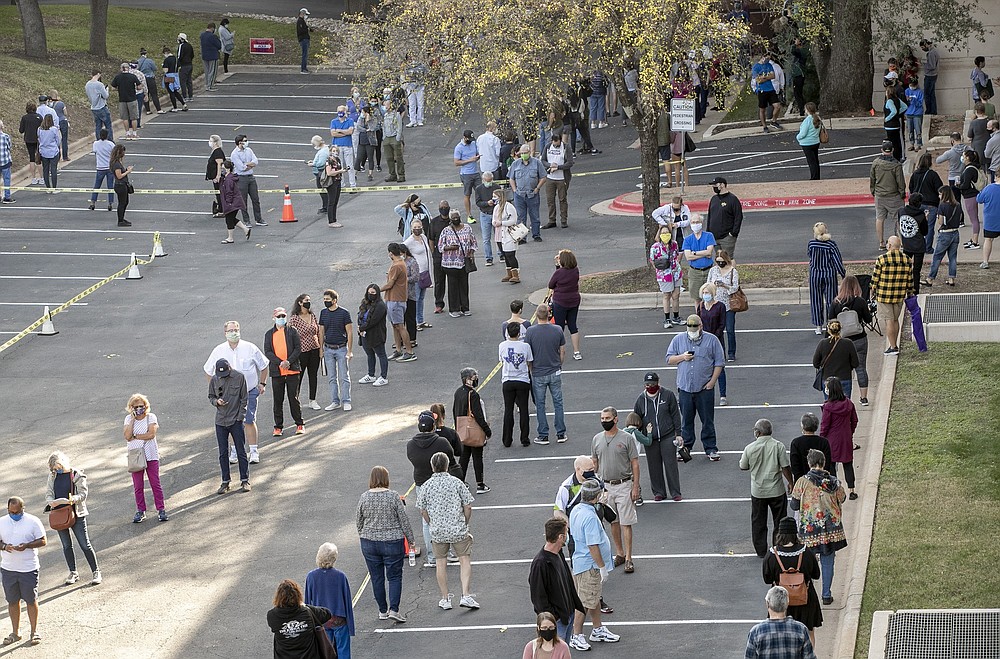 People wait in a long line to cast ballots for the general election at an early voting location at the Renaissance Austin Hotel on Tuesday, Oct. 13, 2020, in Austin, Texas. (Jay Janner/Austin American-Statesman via AP) 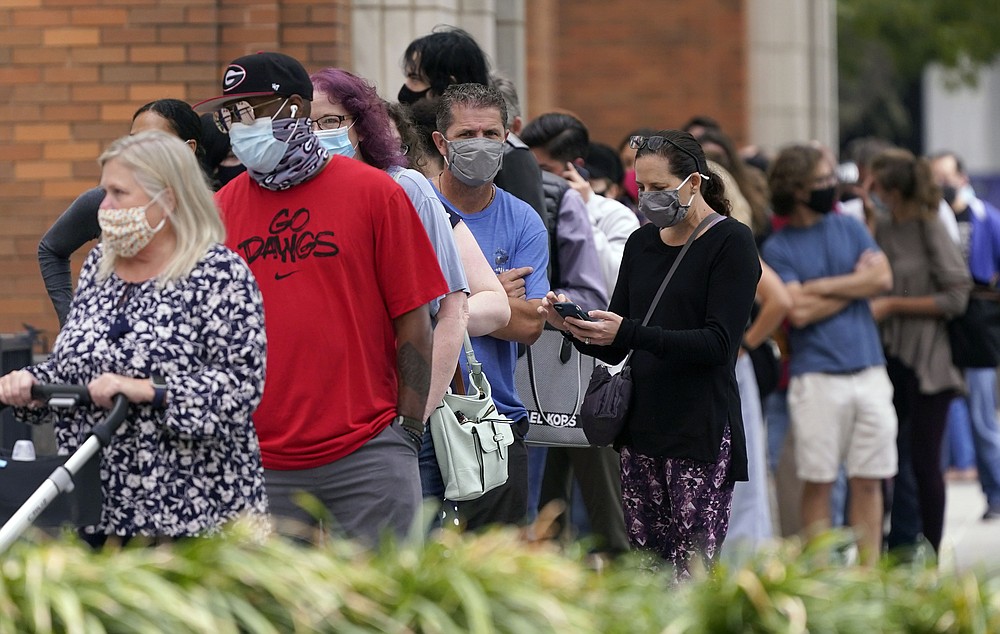 Voters line up and wit to cast a ballot at the American Airlines Center during early voting Thursday, Oct. 15, 2020, in Dallas. (AP Photo/LM Otero) 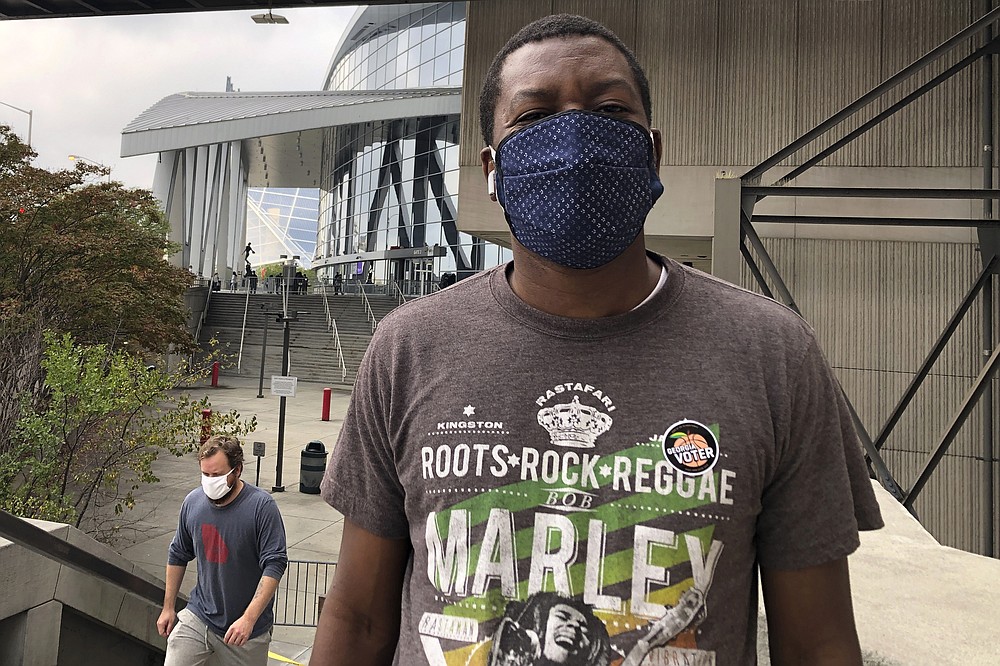 In this Oct. 15, 2020, photo Tunde Ezekiel poses for a photo after voting early at State Farm Arena in downtown Atlanta. A Democrat, Ezekiel said he came out to vote early to avoid Election Day lines and to ensure that his vote against President Donald Trump is counted. (AP Photo/Kate Brumback) 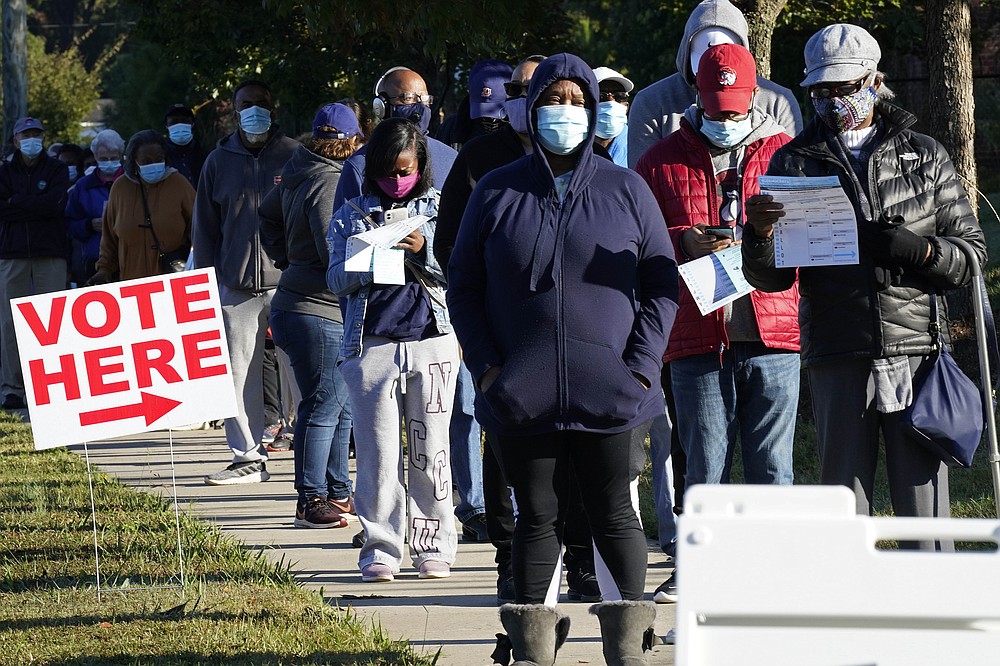 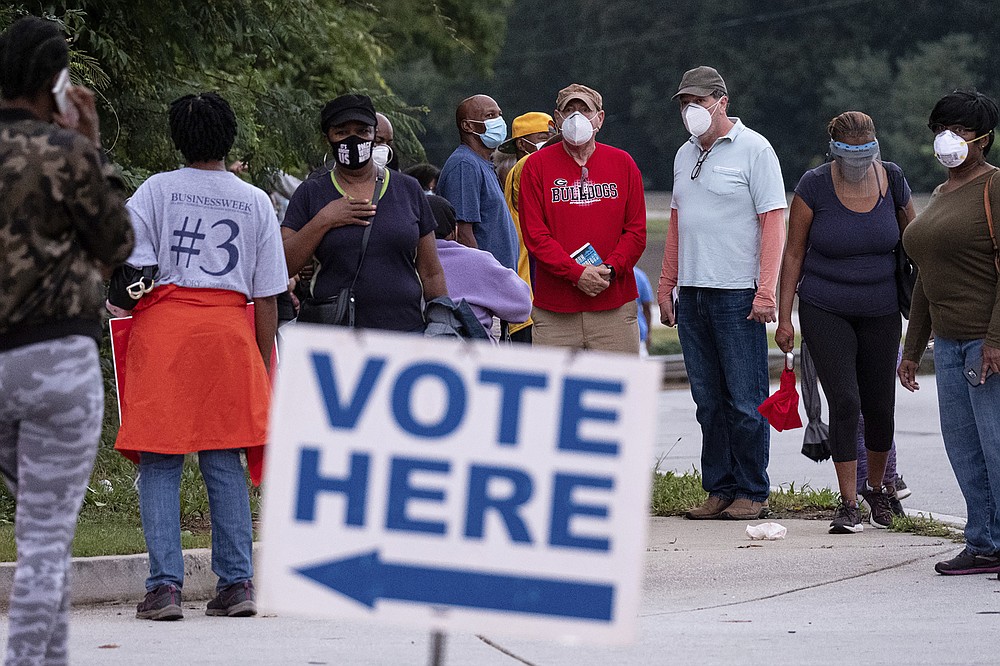