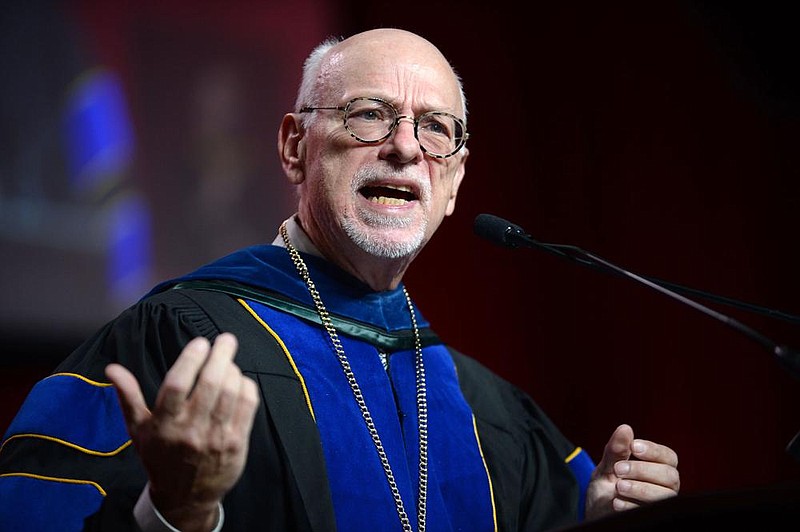 FAYETTEVILLE -- A new "balance" between face-to-face instruction and remote learning is needed for the spring at the University of Arkansas, Fayetteville as students are missing out by not attending in-person classes, Chancellor Joe Steinmetz said Thursday.

"Collectively we need to find a balance between remote instruction and what we do best, which is face-to-face instruction," Steinmetz said in his annual all-campus address. He called face-to-face classes "an important part of the energy and the atmosphere of campus."

"I do want to encourage our faculty to offer as many face-to-face classes as possible this spring. And I want to tell our students to actually show up in person for these courses," Steinmetz said. "To this point, we've shown that attending face-to-face classes can be done safely, as evidenced by the extremely low rates of infection of our faculty, staff and graduate students."

The university in early September had more than 900 active covid-19 cases according to state data, with active cases generally declining and at less than 50 as of Thursday, according to the state Department of Health. Statewide, however, Thursday marked a daily high for new cases, and the state in recent days has also reported record-high numbers of covid-19 hospitalizations.

Steinmetz delivered his talk online. Plans for this semester include the start next week of a virus testing effort that will invite students to be tested and offer incentives -- "perhaps gift cards," Steinmetz said. On-campus and off-campus residents will be selected, he said.

"The goal is to test a minimum of 300 additional students per week on a voluntary basis, perhaps even more than this," Steinmetz said. Roughly 1,100 on-campus tests have been done weekly since mid-September, including athletic department testing, according to data posted by UA online.

Steinmetz remarked on how covid-19 has affected the university's finances, estimating that the university "spent or lost" about $22 million in its response to the pandemic.

He referred to George Floyd -- the Black man who died May 25 in Minnesota while in police custody -- when discussing new efforts to improve diversity and inclusion. Floyd's death became a driving force behind nationwide protests over the summer.

"The impact of the murder of George Floyd on our campus community has sparked expressions of desire by students and faculty and staff to support equality, opportunity and inclusion through action," Steinmetz said, stating that an "audit" is being done of "so we can better understand what more we need to do and the effectiveness also of what we do."

UA, the state's largest university with about 27,500 students, returned to in-person instruction in August after shifting in March to online-only instruction because of the pandemic.

At the beginning of the fall semester, a majority of course sections -- 2,733 out of 4,638, or 59% -- normally taught in person had shifted to remote instruction, a spokesman has said.

By mid-September -- the third week of the fall semester -- the percentage with remote instruction had climbed to 65%, UA spokesman John Post said Thursday.

"We are not an online university, we are not a remote university," Steinmetz said. "It's not who we are." College is "an experience that's enriched" by contact with faculty and other students, he said.

"I'm saddened that our students are largely missing this experience," Steinmetz said.

The UA campus has had 2,153 cumulative covid-19 cases as of Thursday, according to the Health Department, including 47 cases involving faculty or staff members.

Asked how to get students back in the classroom besides just offering the option, Steinmetz referred to his past experiences teaching courses.

"When I was teaching and had a potential attendance problems, then mandating attendance for the face-to-face portion of the class might be a way to essentially guarantee that the the students will be there. So I'd ask our faculty to look at that possibility. Because again, there's nothing like that experience," Steinmetz said.

Temporarily closing the university's Rome Center and providing students refunds or credits because of spring dorm closures were among losses and expenditures listed by Steinmetz as he described financial hits from covid-19 that have added up to about $22 million.

He said the state reduced appropriations in support of the campus by about $15.7 million for the current fiscal year, though he added that state tax revenue has lately been above projections.

The university's budget this year includes $767.8 million in total operating expenses, about 2% less than what the university had budgeted for the previous year.

Steinmetz said an on-campus site has been selected for the planned $100 million Institute for Integrative and Innovative Research research facility. The plan is for the structure to be built near UA's Nanoscale Material Science and Engineering Building.

"We selected this site for the building after a number of informational sessions with a variety of user groups, as well as meetings with our design and construction management teams. We know this, the site will be conducive to promoting radical levels of collaboration, as well as be a highly accessible place to our private sector partners," Steinmetz said.

The new research initiative is supported by $194.7 million from the Walton Family Charitable Support Foundation announced in July. The foundation is run by family members of Sam Walton, founder of Bentonville-based Walmart.

The research effort also is to include establishing a satellite site in Bentonville.

"I made the case for creating the satellite campus in Benton County to deliver courses and programs to employees of the local businesses and industry. In other words, to be right in the backyard of our private partners," Steinmetz said, though he did not refer specifically to any company.