Arkansas' count of coronavirus cases rose Thursday by 1,278 -- the biggest one-day increase since the start of the pandemic.

The state's death toll from the virus, as tracked by the state Department of Health, rose by 11, to 1,645.

"I expected the number of new cases to increase as we enter the last part of the week," Gov. Asa Hutchinson said in a statement.

"This has been the pattern, but the cases reported today set a new record high. Our increased testing efforts allow us to find cases already present and react to them. Each one of us must be proactive in our individual efforts to help slow the spread of this virus."

Thursday's jump in cases was just the second one-day increase that topped 1,200 since the start of the pandemic.

"It's distressing to see the numbers this high," state Epidemiologist Jennifer Dillaha said.

The cases added to the state's tallies included 1,068 that were confirmed through polymerase chain reaction, or PCR, tests.

The other 210 were "probable" cases, which include those identified through less-sensitive antigen tests.

The number of people hospitalized in the state with covid-19 rose by seven, to 594.

Those patients included 106 who were on ventilators, down from 113 a day earlier.

The number of confirmed or probable cases that were considered active, already at record level since Wednesday, rose by 417, to 8,424.

That reflected the cases that were added Thursday minus the 11 deaths and 850 Arkansans who were newly classified as having recovered.

At record level since Monday, the average number of confirmed or probable cases added to the state's tallies each day over a rolling seven-day period rose by two, to 911.

Dillaha said the state continues to experience "widespread community transmission" of the virus, including at social gatherings where public health guidelines aren't being followed.

"We have seen an increase in the percentage of people [who test positive] reporting being at restaurants, but we have not seen a large number of clusters associated with restaurants," she added.

"We're going to take an intensive look at that to see if that is really true" or if some restaurant clusters have been missed in the department's case investigations, she said.

According to a Health Department report, 340 people with active infections in the state as of Thursday said they had been to a restaurant in the 14 days before their diagnosis.

Although that was only about 4% of the state's active case total, the report doesn't say how many of them were reached by the department and asked about their activities.

Dillaha said the state's contact tracers have been keeping up with the caseload "up to now."

"I'm not sure about how long they can maintain that pace before we start seeing some gaps between the time of diagnosis and the notification of contacts," she said.

She said people who are tested should isolate themselves until they receive the results. If the result is positive, they should continue to isolate while waiting to receive a call from the Health Department, she said.

She said they should also warn others who they may have infected.

"I would encourage people to do that, to give their contacts a heads-up, because the whole point of course is to stop the chain of transmission and so people can go ahead and quarantine," she said.

She said she's heard about some people being stigmatized for their positive test result.

"That's puzzling to me, but I know it's true," she said. "People feel ashamed they got it. People blame them, and consequently they want to hide the fact that they've been diagnosed."

Instead of shaming people who test positive, people should offer their support, she said.

"Isolation is not an easy thing to go through, and also they may need some groceries or errands or assistance with child care, so this is a time for us to be helping each other," she said.

The state's count of confirmed and probable cases rose Thursday by 135 in Pulaski County, 111 in Washington County, 97 in Benton County, 89 in Craighead County, 61 in Sebastian County, 60 in Miller County and 53 in Lawrence County.

Among prison and jail inmates, the state's count of cases rose by 79.

Department of Corrections spokeswoman Cindy Murphy said the number of cases among inmates rose Thursday by four, to 100, at the McPherson Unit in Newport.

Those cases included 61 that were active as of Thursday, down from 68 a day earlier.

At the Northeast Arkansas Community Correction Center in Osceola, the number of cases among inmates rose from five to eight.

Five of the cases were active as of Thursday, Murphy said.

Arkansans age 18-24, who make up about 10% of the state's population, accounted for about 13% of the cases added to the state's total.

The 168 cases that were added among that age group translated to a rate of 58 cases per 100,000 Arkansas residents in that age range.

The latest version of a weekly report from the White House coronavirus task force listed Arkansas as having an increase of 138 coronavirus deaths during the week that ended Oct. 9.

That translated to a rate of 4.6 deaths per 100,000 residents, the second-highest rate in the country behind North Dakota.

In the seven-day span ending Thursday, the state added 142 deaths, a rate of 4.7 deaths per 100,000 residents, according to data from The Covid Tracking Project.

That remained the second-highest rate in the country behind North Dakota, which had an increase of 7 deaths per 100,000 residents.

Arkansas' average daily increase in cases during those seven days translated to a rate of 30 cases a day per 100,000 residents.

The Little Rock School District said Thursday that Watson Elementary School, which went to virtual-only instruction this week due to virus cases, will continue with remote instruction through the end of next week.

Clarendon Elementary School, which shifted to online-only instruction last week in response to virus cases, said on its Facebook page Thursday that instruction will remain virtual through the end of next week due to "an increase in cases of COVID19 in our area."

Classes for Clarendon High School were virtual for one day, on Tuesday, with in-person classes resuming Wednesday, according to that school's Facebook page.

In Cabot, Southside Elementary School said on its Facebook page that classes would be online-only today.

"They had an administrator test positive, and so they're having some office staff that are going to have to quarantine," Kimberly Mundell, a spokeswoman for the state Department of Education's Division of Elementary and Secondary Education, said.

The school said the move would "allow our district custodial team to perform a thorough disinfection of not only the office area, but other areas of the school as well."

The Siloam Springs School District said on its website that it would close Northside Elementary School today after a staff member tested positive and "a number of other staff members" were required to quarantine.

Superintendent Jody Wiggins said seven employees were identified as "probable close contacts," meaning they were within 6 feet of the infected person for 15 minutes while the person was infectious.

The closure will allow the district to "clean and sanitize in accordance with [U.S. Centers for Disease Control and Prevention] and Health Department guidelines," the district said on its website.

The school will reopen Monday, it said.

In its daily coronavirus update, the Little Rock district reported that one student at Dunbar Magnet Middle School had tested positive for the virus and 18 others were required to quarantine.

During the 24-hour period ending at 3 p.m. Thursday, an employee at Western Elementary School also tested positive, with seven students and one other employee at that school required to quarantine, the district reported.

A student at Roberts Elementary School and two staff members at other schools were also required to quarantine, the district report.

The district also said it erroneously reported Wednesday that a staff member at Dunbar had tested positive. It said it should have reported that two students and one staff member at the school had been required to quarantine.

Meanwhile, the Arkansas Center for Health Improvement on Thursday labeled 26 school districts as being in the "red zone," based on the number of new cases among residents within their boundaries over a two-week period.

That was up from 13 districts a week earlier.

"The doubling of the number of school districts in the red zone in one week is a cause for concern," Joe Thompson, the center's president, said in a news release.

"Most of the districts entering the red zone this week are in rural areas, which shows that COVID-19 is affecting all parts of the state. Residents of these districts should be especially careful to take precautions against further spread: Maintain six feet of distance from people who are not members of your household and wear a mask when out in public."

In a weekly update on its website, the center lists districts as being in the red zone if they had at least 50 cases per 10,000 residents who are not prison or jail inmates or nursing home residents over a two-week span.

As of Monday, the Lawrence County School District had 98 such cases per 10,000 residents within its boundaries, the highest rate among the state's districts.

The Spring Hill School District in Hempstead County had the next highest rate, with 81 new cases per 10,000 residents.

It was followed by the Sloan-Hendrix School District in Lawrence County, which had 80 new cases per 10,000 residents.

According to Health Department reports, 58 school districts had five or more active infections among employees and students as of Thursday, up from 51 on Monday.

The number of infections among students or employees that were considered active grew by 59, to 890.

At colleges and universities, active covid-19 cases increased to 453 as of Thursday according to the latest Department of Health report, up from the 417 active cases listed in the department's previous report on Monday.

Harding University topped all colleges with 92 active cases, an increase from Monday's 82 cases, according to Department of Health data.

Updates published by institutions have differed from the statewide totals, and Harding on its website Thursday reported 71 active student cases and 10 active employee cases.

The report Thursday listed the University of Central Arkansas with 53 active cases, the same number as listed in Monday's report.

"While we have successfully made it through the first half of the fall semester, now is not the time to let our guard down," UCA President Houston Davis said in a message to campus Tuesday. "We must all diligently follow our health and safety protocols in order to maintain our low virus numbers and complete the semester as planned." 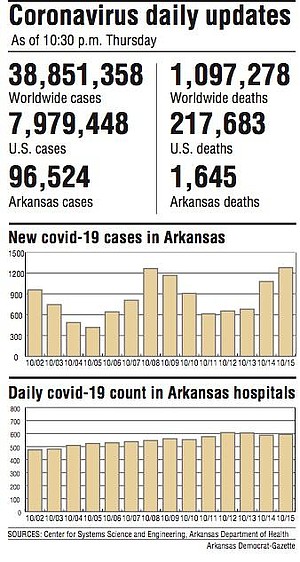