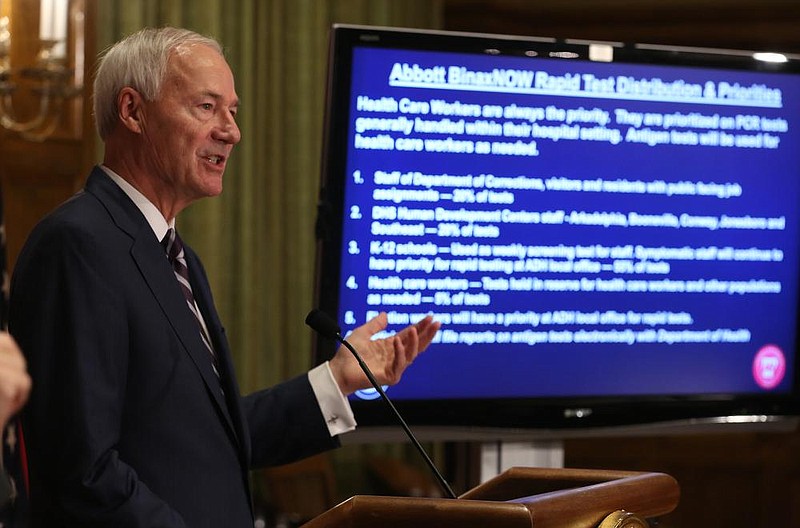 Gov. Asa Hutchinson announced Wednesday that the state will soon begin using disposable, $5 kits to conduct weekly coronavirus testing of employees at certain public school districts as well as at all the state's prisons and human development centers.

He unveiled the plan as the state's count of coronavirus cases increased by 1,079 -- the highest single-day increase so far this week and one that exceeded the amount added on the same day a week earlier.

The state's death toll from the virus, as tracked by the Arkansas Department of Health, rose by 23, to 1,634.

[Video not showing up above? Click here to view » https://www.youtube.com/watch?v=AACXLW9plz4]

The weekly antigen tests will be performed using credit card-size BinaxNOW kits, made by Abbott Laboratories, that return results in about 15 minutes without the use of a machine or computer equipment.

Hutchinson said the state has received 100,000 of the kits from the federal government and expects to receive 50,000 more each week.

"This is the first time we've developed a plan for sentinel testing, or surveillance testings, that goes beyond simply symptomatic or exposure-type testing, and so this is a new world for us that will give us new benefits for this testing," Hutchinson said at a news conference at the state Capitol.

The Republican governor said late last month that Arkansas had been allocated 900,000 of the 150 million BinaxNOW kits that the federal government purchased for $760 million in August.

He said Wednesday that 55% of the state's share will be used for weekly testing of employees at public elementary and secondary schools.

The remaining 5% will be kept in reserve to be used on health care workers and others "as needed," he said.

All the test results will be electronically reported to the Health Department, he said.

"Our goal is to utilize this in a way that will expand the confidence in our schools and to be able to identify viruses that we've never been able to detect before," Hutchinson said.

He said health care workers "are always the priority" and generally have access to more accurate polymerase chain reaction, or PCR, tests through hospitals.

He added that election workers will also have priority for rapid tests conducted at the Health Department's local health units.

"If a poll worker wonders, you know, 'Have I exposed myself to someone,' and they want to be tested, we want to accommodate that," Hutchinson said.

The BinaxNOW test was granted an emergency-use authorization by the U.S. Food and Drug Administration in August after a study found it to be effective in detecting the virus in people soon after they developed symptoms.

The study didn't examine the test's performance in detecting infections among people who are asymptomatic.

"This serial screening would help with this issue" of detecting asymptomatic infections, Lesnick said in an email.

Health Secretary Jose Romero said Wednesday that the tests "have high sensitivity and high specificity in the laboratory and in the test setting."

"We hope to see the same degree of sensitivity and specificity as they're rolled out," he said.

He added that the state "will gain more information about how well these work over the next few weeks, but they are being deployed in centers that we believe will have a major impact on our caseload here."

In deciding which school districts will get the test kits, Education Secretary Johnny Key said state education officials will examine the level of covid-19 infections in the community; the district's history of having to shift to virtual instruction in response to virus cases; the number of cases within the district; and "any emerging information that may come about that shows that a hot spot could be developing."

Districts must have a staff members trained to administer the tests and must agree to report positive and negative results to the Health Department's electronic system.

The districts must also agree to work with the Health Department to order supplies as needed and to participate in ongoing training as needed.

He said he hopes to identify the districts by Monday, conduct training and distribute supplies over the next two weeks and begin the weekly testing on Nov. 2.

At the state's prisons and community correction centers, the tests will be used for facility staffs, including staffs with Wellpath, which provides medical care at the prisons, Corrections Secretary Solomon Graves said.

Non-facility staff members visiting a prison will also be tested, as will inmates with "forward-facing job assignments," he said.

That includes porters or "trusty-level inmates" and inmates assigned to work-release programs or prison factories, he said.

Wellpath will test inmates, develop training for staff members to administer the tests to themselves, and provide a handout for patients with instructions on isolating after a positive result, Graves said.

"No more than seven calendar days will separate any test either for staff or for inmates," he said.

He said the Corrections Department will begin a "phased rollout" of the testing next week, with the tests beginning across the department the following week.

Staffs at the state's five human development centers, which house and care for people with severe developmental disabilities, were set to begin training on Wednesday afternoon on administering the tests, said Melissa Stone, director of the Human Services Department's Division of Developmental Disabilities Services.

The 1,800 staff members at the centers will be tested every week starting next week, she said.

"We do think this will help identify and stop spread in our congregate settings," Stone said.

"We're actively trying to take care of our clients, and we are very grateful."

In several of its weekly reports to the state, the White House coronavirus task force has recommended routine testing of the employees included in Hutchinson's plan, as well as other populations, such as college students and first responders.

"The availability of tests is one important factor that allowed us to begin this testing initiative now," Lesnick said.

"Comprehensive testing is available at colleges and universities even though they are not a part of this testing initiative."

He said it wouldn't be possible to conduct weekly testing of public school students, human development center residents and all prison inmates because the testing initiative "is limited to 50,000 a week at this time."

The federal government last month began requiring nursing homes to test their employees at least once a month and up to twice a week, depending on the percentage of PCR test results in the county that are positive.

She said the BinaxNOW and other rapid tests are sometimes used to fill in gaps, such as testing a new employee or contractors such as medical directors, nurse practitioners and therapists.

Some homes are also offering rapid tests to people concerned that they might unwittingly be carrying the virus as they visit a resident, she said.

"People are just so scared right now," Bunch said. "I know there have been situations where facilities have been able to help with that."

The University of Arkansas, Fayetteville is working on a plan to increase testing on campus, especially among students, spokesman Mark Rushing said in an email.

"This will likely involve inviting randomized groups of students to be tested during a certain time frame," he said. "We're still working out the details but hope to begin that effort as early as next week."

In the meantime, he said, students, faculty and staff members have access to testing at the campus health center five days a week.

The university has conducted more than 9,600 coronavirus tests since Aug. 10, he said.

On its website, UA reported identifying 10 new virus cases since its last update on Monday, with the number of active cases rising from 35 to 41.

The cases added to the state's tallies on Wednesday included 884 that were confirmed through PCR tests.

The other 195 were "probable" cases, which include those identified through antigen tests.

The number of people hospitalized with covid-19 in the state fell by 18, to 587. Those patients included 113 who were on ventilators, up from 110 a day earlier.

The number of Arkansans who have ever been hospitalized because of covid-19 rose by 79, to 6,148.

The number who have ever been on a ventilator rose by eight, to 755.

The number of confirmed or probable cases that were considered active rose to a new record, 8,007.

That was an increase of 263, reflecting the cases added Wednesday minus the 23 deaths and 793 Arkansans who were newly classified as having recovered.

The state's count of confirmed and probable cases rose by 124 in Pulaski County, 74 in Craighead County, 65 in Washington County, 61 in Jefferson County and 60 in Benton County.

Among prison and jail inmates, the state's count of cases rose by 125.

Corrections Department spokeswoman Cindy Murphy said the number of cases among inmates rose Wednesday by 44, to 492, at the Wrightsville Unit; by 27, to 283, at the Pine Bluff Unit; by 22, to 40, at the Tucker Unit in Jefferson County; and by 18, to 96, at the McPherson Unit in Newport.

Of those prisons, the Wrightsville Unit had the largest number of active cases, with 93.

At a record level since Monday, the average number of confirmed or probable cases added to the state's count rose Wednesday by almost 39, to 909.

The district said Tuesday that it had six students and two staff members test positive for covid-19.

The district has five quarantined teachers, six quarantined support staff members and 82 quarantined students, according to a report to the Arkansas Department of Education.

The Cleveland County School District is also modifying its operations to dismiss at 12:30 p.m. starting next Wednesday to allow teachers to catch up on work and for the building to be deep-cleaned.

Schools will still be open for students who need to be there, according to the state Department of Education. The anticipated end date for the shift is Dec. 16.

In its daily covid-19 update, the Little Rock School District reported an increase of one positive case each among teachers at Dunbar Middle, McDermott Elementary, Watson Elementary and Williams Elementary School.

Overall, 27 people were placed under quarantine during the 24-hour period ending at 3 p.m. Wednesday, the district reported.