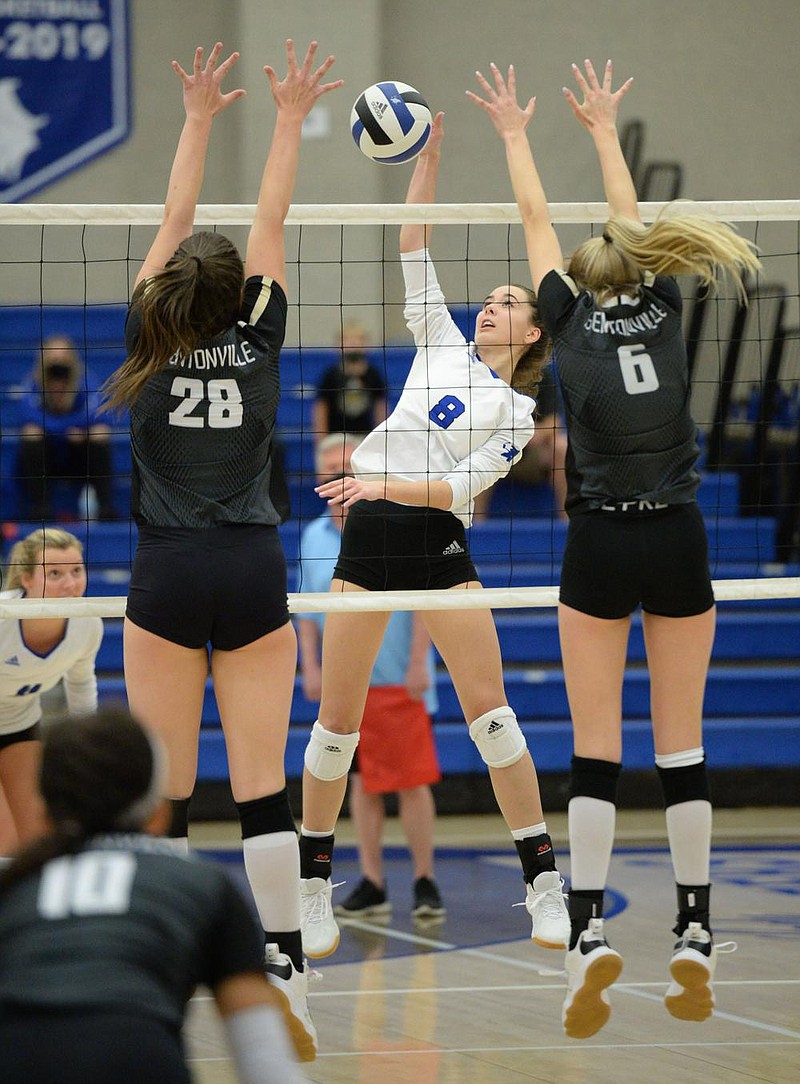 ROGERS -- It looked as though Bentonville High had wrestled the momentum away when it won the third set, but Rogers High turned the tables and earned a hard-fought five-set 6A-West Conference victory.

Rogers coach Christina Lawrence said she talked a little bit about the opponent in the huddle following the third set.

"I kind of focused a little bit on the other team," Lawrence said. "Bentonville, they just work hard every point. I made a comment saying they're playing like they're at home and taking way this opportunity from you because they're playing hard."

"I think it really made the girls think and self-motivated to work harder, do the little things. We kinda get caught waiting to get points free from the other team. And this time I think we just stepped up and started to earn them.'

Rogers, which is playing only its second match after being off for two weeks because of covid-19 quarantine, definitely responded. The Lady Mounties (8-4, 3-4 6A-West) jumped to a 12-4 lead in the fourth set and cruised to force a fifth.

Bentonville forced a 9-9 tie in the fifth but Rogers came back to score the next two and went on to the victory.

Gracie Carr led Rogers with 17 kills, while Abby Harris and Kate Miller chipped in seven each. Madison Rhea anchored the defense with 27 digs. Phoenix Bailey was also a force at the net with eight blocks.

Bentonville coach Michelle Smith said her team showed some effects from a five-set win over Bentonville West on Monday.

"That fourth set was kinda hard, they just sorta ran out of gas," Smith said. "Two nights back-to-back and going to five. But in the fifth the fire came alive again. Honestly, we talked about it as a team. Defense carried the load tonight and our offense needs to go back to the drawing board."

Trinity Hamilton led Bentonville (10-6, 4-6) with a match-high 24 kills and 20 digs, while Maddie Lee and Gloria Cranney chipped in eight each. Jamie Myrick anchored the defense with 33 digs. Maddy Hughes dished out 46 assists and added 11 digs.

Riley Richardson added six kills and Ally McCasland recorded a trio of aces for the Lady Wolverines, who will close out the regular season Thursday at Fort Smith Southside.

Madelyn Sestak and Emerson Traweek hammered nine kills each to lead the Lady Saints to a 25-13, 25-6, 25-16 4A-Northwest Conference win over Huntsville.