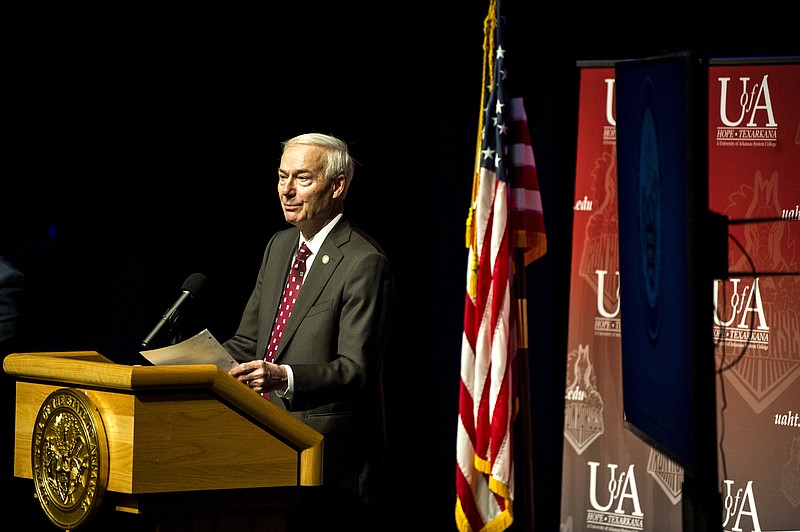 Governor Hutchinson addresses the media from Hempstead Hall Theatre at the University of Arkansas Hope-Texarkana during his weekly update on Arkansas' response to COVID-19 on Tuesday, Oct. 13, 2020. (Arkansas Democrat-Gazette / Stephen Swofford)

Arkansas Gov. Asa Hutchinson on Tuesday renewed the state's public health emergency in response to the coronavirus pandemic for an additional 60 days as the state's count of virus cases grew by 680.

After climbing to a new high on Monday for the sixth time in seven days, the number of people hospitalized in the state with covid-19 fell on Tuesday by three, to 605.

The state's death toll from the virus, as tracked by the state Department of Health, rose by 25, to 1,611.

Hutchinson said the extension of his emergency declaration, originally issued March 11, would keep in place measures such as liability protections for businesses, an expansion of telemedicine and "other things that are necessary during the management of this pandemic and for life to go on."

"We are pleased that we had a reduction in hospitalizations today, but it wouldn't surprise me if it goes up tomorrow, and so it's something that you don't measure over a short period of time but a longer period of time. And if additional action needs to be taken, we can do that," Hutchinson said at his weekly covid-19 news conference, held Tuesday at the University of Arkansas Hope-Texarkana.

He said his public health team had given him options for such actions.

Those include increasing enforcement of Health Department directives aimed at preventing the spread of the virus in restaurants, bars and other businesses and encouraging businesses that are in compliance, he said.

[Video not showing up above? Click here to view » https://www.youtube.com/watch?v=Gu3qzSOkTVI]

"I will add that there's not really an option to go back on our opening of businesses," Hutchinson said. "We're way past that in Europe, in the United States, here in Arkansas."

Instead, he said, "The ultimate solution is to follow those guidelines to make sure that we're doing what we can through individual responsibility of wearing a mask, washing your hands, social distancing, avoiding large crowds unless the protections are in place."

"We can't cover everything from a Department of Health and an inspection -- and that's not what you want us having to do, to go into every business and to check them out," he said.

"We don't have the capacity for it."

The Washington Post on Tuesday listed Arkansas as having the third-highest number of hospitalized patients per capita among the states, behind South Dakota and Montana.

In response to a reporter's question, Hutchinson suggested that photographs posted by Attorney General Leslie Rutledge that show her at campaign events without wearing a mask and in close proximity to supporters of President Donald Trump aren't helping to spread the right message.

"I'll let her address the specifics of that, but it is important for us as public leaders to do two things," Hutchinson said. "One is to follow the guidelines and set a good example, and then secondly, it's helpful whenever we have a public facing posture that we demonstrate that we're setting a good example.

"I know the attorney general. I've seen her. I've been with her. She wears a mask, but it is helpful to make sure that that example is public as well."

A statement from Rutledge didn't address questions submitted by the Arkansas Democrat-Gazette about why she isn't wearing a mask in the photographs and whether she's concerned about setting a bad example.

"I have spent the last couple of days traveling as a surrogate for President Trump's campaign," Rutledge, who has announced plans to run for governor in 2022, said in the statement.

"While I regularly wear a mask to protect my family and those around me as required in certain venues, there are clearly times I have been photographed without a mask."

Earlier this month, Hutchinson said the state had received 59,000 of the BinaxNOW kits, manufactured by Abbott Laboratories, that return results in about 15 minutes without the use of a machine or computer equipment.

The increase in the state's case count included 481 that were confirmed through polymerase chain reaction, or PCR, tests.

The other 199 were "probable" cases, which include those identified through less-sensitive antigen tests.

Although the number of covid-19 patients in hospitals fell, the number who were on ventilators rose Tuesday by six, to 110.

"This is a worrisome direction for us because we want the numbers to go down," state Epidemiologist Jennifer Dillaha said.

She encouraged Arkansans to get a flu shot as soon as possible, noting that older people are at higher risk of becoming seriously ill from both the flu and covid-19.

She said the state's covid-19 deaths include one person who died late last month and had both the coronavirus and the flu.

The flu killed 125 Arkansans during the previous flu season, which officially ended last month, she said.

"It will be with us through the winter, and we need to prepare and get our flu shots now," she said.

The number of Arkansans who have ever been hospitalized with covid-19 increased Tuesday by 109, to 6,069.

The number who have ever been on ventilators rose by 10, to 747.

At a record level since Friday, the number of cases that were considered active fell Tuesday by 95, to 7,744.

That reflected the 680 cases added to the state's tallies, minus the 25 deaths, 749 Arkansans who were newly classified as having recovered, and one person with an active infection who died of a reason unrelated to covid-19.

So far this week, the number of cases added to the state's tallies each day has increased and has been greater than the number added a week earlier.

After reaching a new high Monday, the average number of confirmed and probable cases added to the state's total each day over a rolling seven-day period rose Tuesday by six, to 871.

The state's count of cases rose Tuesday by 78 in Pulaski County, 55 in Benton County, 45 in Washington County, 44 in Craighead County, 35 in Lonoke County and 31 in Faulkner County.

Among prison and jail inmates, the state's count of cases rose by 11.

Such increases can reflect new cases or ones that were added earlier but were not immediately classified as coming from a jail or prison. Cases among inmates are also sometimes added several days after a test is conducted, after information from laboratory reports is entered into a state database.

The state's count of cases rose by 98 among Arkansans age 18-24, translating to an increase of about 34 cases per 100,000 residents in that age group.

All 25 of the deaths announced Tuesday were of confirmed cases, bringing the state's count of deaths among such cases to 1,463.

The state's count of deaths also includes 148 among probable cases.

Health Department spokeswoman Danyelle McNeill said all of the 25 deaths that were added on Tuesday happened in October.

The state's count of virus deaths grew by five in Pulaski County and by two each in Craighead, Jefferson and Lonoke counties.

Among nursing home and assisted living facility residents, the state's count of virus deaths rose by 10, to 576.

Projections released Tuesday by the Fay. W. Boozman College of Public Health showed a continued improvement in the state's long-term outlook for hospitalizations.

The latest forecast report, dated Oct. 7, predicts that the state's active infections will peak at 52,087 on March 5 under a moderate scenario or 80,753 under a worst-case scenario.

Those numbers include infections predicted to be confirmed through tests, as well as undetected infections of people who don't show symptoms and others who are infected but don't get tested.

Under a moderate scenario, the latest forecast predicts that hospitalizations will peak at 1,250, with 437 Arkansans in intensive care and 152 on ventilators.

The earlier forecast had predicted a peak of 1,401 hospitalizations, with 490 Arkansans in intensive care and 171 on ventilators.

"Changes in the long-term model may be due to a slowing of new infections in the last month, with the epidemic spreading over more months with fewer cases at its peak," researchers said in the latest forecast.

According to a weekly report from the White House coronavirus task force, Arkansas added 5,535 cases to its tallies last week, down from 5,831 the previous week.

The latest report, dated Sunday, continued to list Arkansas as being in the "red zone" for cases, meaning it had 101 or more new cases per 100,000 residents last week.

It also continued to list Arkansas as being in the "yellow zone" for its percentage of PCR tests that were positive.

The report also listed 15 of Arkansas' counties as being in the red zone, meaning that they had 101 or more new cases per 100,000 residents last week and that 10.1% or more of their tests were positive.

"Retail establishments are enforcing mitigation efforts by adjusting their businesses so very few transmissions occur in those settings; the majority of cases are from interactions at home with friends and family," the report says.

"Arkansans should know that such gatherings must be limited in size and include both masks and social distancing."

Citing a rise in cases among Arkansans age 65 and older, the report says Arkansas should "provide information through senior citizen networks to alert them to take precautionary measures."

It included maps illustrating the per capita case growth rate, death rate and the percentage of tests that were positive in U.S. counties one month, two months and three months earlier.

"These demonstrate the impact of comprehensive mitigation efforts when implemented effectively and that partial or incomplete mitigation leads to prolonged community spread and increased fatalities," the report says.

The Atkins School District, which lost its superintendent at the end of September from complications due to covid-19, announced Tuesday that its middle school students would shift to online-only instruction for almost two weeks because of a large number of people under quarantine after contact with people who tested positive.

"It is a quarantine issue," acting Superintendent Darrell Webb said. "Not a case issue."

Webb said the district is still adjusting to the loss of Superintendent Jody Jenkins, who died Sept. 29 after a grueling battle with the covid-19.

Jenkins had been placed on a ventilator at a hospital in Little Rock and suffered from blood clots in his legs and heart.

"Anytime you have a crisis, you come together more as a team, as a school and a community," Webb said. "We try to pat each other on the back and tell each other everything is going to be OK."

Students are scheduled to return to classrooms Oct. 28, he said.

The school has one covid-19 case, according to its Facebook page.

Six students will remain quarantined while the rest of the class is returning to school today.

In its daily covid-19 update, the Little Rock School District reported an increase of two cases among students at Central High School, which had already shifted to online instruction through the end of this week.

The school had one employee who was placed under quarantine during the 24-hour period ending at 3 p.m. Tuesday, the district reported.

Two employees at Watson Elementary School and one at Bale Elementary tested positive for the virus, the district reported.

An additional five students and one employee at other schools were placed under quarantine, the district said.