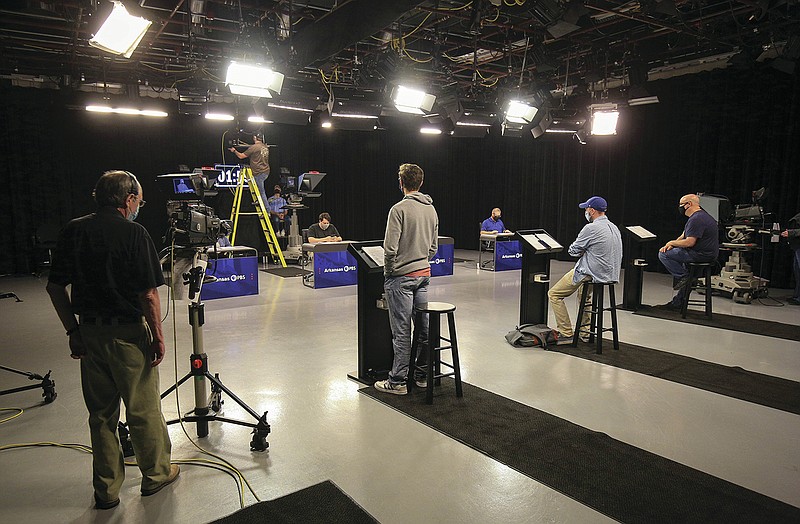 Arkansas PBS employees do a run through for upcoming political debates Friday Oct. 9, 2020 at their studio in Conway. (Arkansas Democrat-Gazette/Staton Breidenthal)

Covid-19, which has disrupted many of the nation’s political rituals, won’t interfere with Arkansas PBS’ long-running televised debates of Arkansas candidates.

The stage is prepared, the cameras are in place and the candidates have been summoned to the Conway studios for this week’s face-offs. All but U.S. Sen. Tom Cotton have agreed to appear.

The hourlong forums, which air on public television today through Wednesday, will also be livestreamed at youtube.com/arkansaspbs, organizers said.

The 2nd Congressional District debate, between Republican U.S. Rep. French Hill of Little Rock and Democratic state Sen. Joyce Elliott of Little Rock, will be taped at 2 p.m. today and broadcast this evening at 7 p.m.

The 3rd Congressional District debate, with Republican U.S. Rep. Steve Womack of Rogers, Democrat Celeste Williams of Bella Vista and Libertarian Michael Kalagias of Rogers, begins at 3:30 p.m Tuesday. It will air on PBS at 8 p.m.

With Cotton, a Little Rock Republican, facing no Democratic opponent, he opted not to participate.

Wednesday’s Senate forum will feature only one candidate — Pine Bluff Libertarian Ricky Dale Harrington. His studio appearance is at 3 p.m., and his segment will be broadcast at 7 p.m.

Because of the ongoing public health emergency, PBS officials have made adjustments, said Tanisha Joe-Conway, the debate’s supervising producer.

“We are implementing several different safety measures to make sure we keep people as safe as possible,” she said. “We are, of course, making our stage even larger to accommodate for proper social distancing.”

Staffers will wear masks and, when necessary, gloves, she said. Attendance will be sharply restricted.

“We like to have live audiences, but we’re not going to be able to do that this year,” she said.

Instead of cookies and coffee, guests will be offered water bottles and pre-packaged snacks, she added.

“We like to have live audiences, but we’re not going to be able to do that this year.”

Despite the challenges, the debates remain a priority, Joe-Conway said.

“We have been doing these since at least the early ’90s,” she said.

The forum “allows us to bring the candidates and Arkansans together,” she said. People “get to hear their views, their ideas, their platform and what their plans are when they get into office.”

The debates will be rebroadcast on Oct. 18, beginning at 1 p.m.

In interviews, Hill and Elliott portrayed today’s debate as a chance to highlight their differences.

“I think it’s always important to voters to contrast your records. State Sen. Elliott has a long, career politician’s record of raising taxes and being against school choice opportunities for low-income families,” Hill said.

Elliott said she plans to share her “background of growing up in rural Willis-ville and being a teacher for 30 years and then working in the Legislature to improve people’s lives.”

“I’m ready to talk about my record. As you know, I’ve had a record of public service, not self-service,” she said.

As Election Day nears, the airwaves are awash in 30-second campaign commercials. At the debate, candidates are given 2 minutes to answer each question.

“I do like the idea of having more time to talk about records so that people understand what I’m all about and what my opponent has done and not done,” Elliott said.

Hill said today’s forum is an opportunity “to talk about the issues and the outlook for our future, how we’re going to beat the virus and rebuild our economy and restore the health of the American people and, I hope, renew the American dream.”

“I look forward to that debate with her,” Hill added.

Panels of journalists will ask the questions. Steve Barnes, longtime host of “Arkansas Week,” keeps things running smoothly. When necessary, he can remind long-winded candidates that their time is up. He plays no role in picking the debate topics.

“In the [Arkansas Educational Television Network] format, I as moderator pose no questions, merely serve as ‘traffic director’ and hold both candidates and the three journalists who comprise each panel to the rules. Or try,” he wrote in an email.

The 2nd District debate could be exciting, he said.

“[T]here’s a certain tingle when the race is a close one, or when the body politic signals an impending shakeup,” he wrote. “The [Mark] Pryor-Cotton debate of six years ago, for example; and obviously the Hill-Elliott race this year in AR-2.”

Thus far, Arkansas candidates have respected the time limits and have adhered to a certain level of decorum, Barnes said.

“There have been no Trump-Biden experiences, none,” he wrote. “I have no reason to believe this year’s debates will be anything other than civil. Pointed maybe, but civil.”