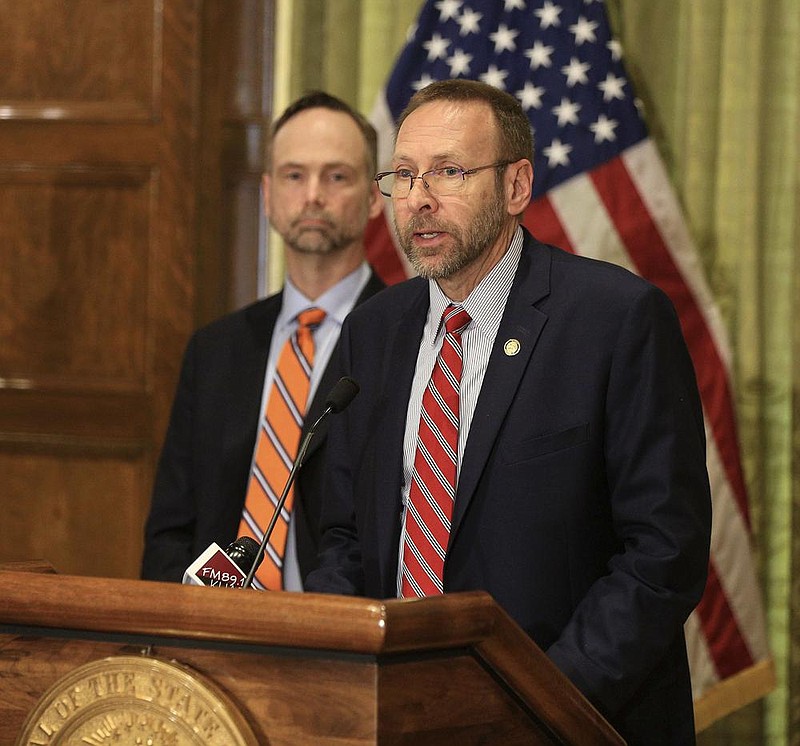 Former Arkansas Department of Health Secretary Dr. Nate Smith in May privately expressed concern to the Arkansas surgeon general, Dr. Greg Bledsoe, that Bledsoe was “not on the same page” regarding the state’s covid-19 response.

In an interview last week, Bledsoe said he and Smith experienced a disagreement when Bledsoe expressed his feeling that health officials ought to proceed carefully and be precise when implementing restrictions on business activity because “otherwise we’re creating more harm than good.”

A log of Smith’s text messages obtained by the Arkansas Democrat-Gazette through a public records request shows that on the morning of May 13, Smith reached out to Bledsoe while simultaneously conveying his concern about the surgeon general to Gov. Asa Hutchinson.

“Greg, I’m concerned that you are not on the same page as me or the Governor with regard to the goals of our COVID-19 response and recovery efforts,” Smith wrote.

Smith added that he would have an assistant schedule a time for them to meet and discuss.

Bledsoe replied, “Thanks, Nate. I would never do anything to undercut you or the Governor, but I do have serious concerns about our overall goals and messaging. Looking forward to connecting.”

Several minutes after he received the response from Bledsoe, Smith texted Hutchinson, according to the text message log. Smith forwarded to the governor Bledsoe’s reply in which the surgeon general mentioned his “serious concerns.”

“I would like to get your guidance on how to best utilize the State Surgeon General in our COVID-19 response efforts. Can we set up a private meeting or call to discuss?” Smith wrote to Hutchinson.

“I will call him,” Hutchinson replied.

At the time, Smith was helping to lead the state’s response to the covid-19 outbreak and was a constant presence at the near-daily virus briefings held by the governor. Smith also chaired a group created by Hutchinson in April called the Medical Advisory Committee for Post-Peak COVID-19 Response. The governor appointed Bledsoe to serve as one of its members.

Over the summer, Smith left his position as secretary of health to join the federal Centers for Disease Control and Prevention in Atlanta, where he now serves as deputy director for public health service and implementation science. The governor named another Department of Health official, Dr. Jose Romero, as Smith’s replacement.

In an interview Tuesday, Bledsoe recalled that the difference of opinion with Smith surfaced during a phone call with members of a medical advisory group pertaining to the state’s direction in the aftermath of the initial covid-19 response.

“We weren’t arguing in a unfriendly way or anything like that, and what happened was Nate asked some questions on the phone call. I responded and said, ‘You know, this is my perspective on this,’” Bledsoe said. Smith responded to his comments, Bledsoe recalled, and Bledsoe told him he thought they differed on “X, Y and Z.”

After the call, Smith followed up with the text message, Bledsoe said, and the two of them met one-on-one in Smith’s office the next day to discuss the issue for about an hour and a half.

“It was actually really good,” Bledsoe said. “I think after our one-on-one talk, we realized that we were much closer to each other than we originally anticipated.”

While the two officials acknowledged at the end of the meeting that there were a few things they might not completely agree on, Bledsoe said he and Smith “ended the discussion as friends and respected colleagues, and he’s a very dear friend of mine.”

Additionally, Bledsoe said Hutchinson called him that afternoon, after the phone call with medical professionals.

When asked about the central disagreement between him and Smith, Bledsoe said he felt that when mandating restrictions on businesses, health officials needed to be sure they were implementing them “in a very precise way, and that we’re only going so far as we absolutely have to.”

He said he could not remember the specific topic on the phone call in May that sparked the discussion, but recalled vocalizing in fairly strong terms the feeling that health officials should be very careful when requiring businesses to shut down, and should limit the length of shutdowns as much as possible.

“Because this is a big deal,” Bledsoe said. “I mean, you’re taking away people’s rights to earn money, you’re potentially closing their business for good in some of these small towns, and we don’t know the long-term ramifications of this.”

In a separate exchange via email three days later, Bledsoe shared with Smith an opinion column in The Wall Street Journal authored by Peggy Noonan, records show. Smith responded with a polite but lengthy rebuttal in which he pushed back on Noonan’s conclusions about the people affected by economic restrictions implemented during the outbreak.

In her May 14 column titled “Scenes From the Class Struggle in Lockdown,” Noonan said the professionals managing the response to the outbreak were insulated from the economic fallout of the crisis compared with working-class people. She described the “clamor” against a lockdown in the state of Michigan as “real, and serious.”

“People are in economic distress and worry that the foundations of their lives are being swept away,” Noonan wrote.

In his reply to Bledsoe on May 17, Smith wrote that he was not in a position to second-guess decisions in states like Michigan and Pennsylvania. But he pointed out that Arkansas “never ‘shut down,’” and he criticized Noonan’s column for a lack of perspective.

“It is somewhat ironic that an article in the WSJ claims to understand and advocate for the lower classes, since very few of the individuals in those groups read or write articles for WSJ,” Smith wrote. “Noonan’s perspective is very different from the people she is writing about and has collapsed everyone who is not an elite [WSJ reader] into one homogenous group with a supposedly similar viewpoint on COVID-19 policy. This could not be further from the truth in Arkansas.”

Although the business owners who were flooding his email inbox wanted the state to open up quickly, Smith wrote, many of the workers on the front line of the pandemic in grocery and retail stores, hospitals and dental offices “are desperately afraid.”

“Their emails are less frequent, less strident and often anonymous,” Smith wrote. “Since they have considerably less economic and political power than the owners, their voices are more difficult to hear, but there are a lot more of them, they are generally at higher risk than the owners of contracting COVID-19 through their work, they have fewer options if they or their family members become sick, and they have to go back to work once their employers reopen. In Arkansas, this is the real battle line in the class struggle.”

Later in his response, Smith mentioned receiving a call that morning about a poultry company in Arkansas where 27 of 30 workers who had been tested the day before returned positive test results for the virus.

“The risk of infection is disproportionately high among those who gain the least economic benefit from this business activity,” Smith wrote. “These are also the people to whom decision-makers are often least sensitive.”

At the end of his email, Smith thanked Bledsoe for thinking through the difficult issues. “I hope you have also heard my perspective and can better understand the advice I am giving to the Governor,” Smith added.

Records show Bledsoe sent a brief reply to Smith thanking him for his feedback.

When asked about the exchange, Bledsoe said, “There’s no animosity between Nate and me; I love the guy. I think where we have a difference of opinion … may be summarized in that email.”

Requests to speak with Smith were not returned by the CDC.

In an emailed statement provided by a spokeswoman, Hutchinson said, “This seems like a long time ago. The issue was handled by a conversation between Dr. Smith and Dr. Bledsoe. I value the varied opinions that might be expressed by my medical advisors. Without that freedom of offering differing opinions the public would not be well served.”

Asked if he felt that Bledsoe was undercutting the state’s covid-19 response at any time during the pandemic, Hutchinson said no.