FAYETTEVILLE -- Medical marijuana sales in Northwest Arkansas have amounted to about 30% of the state total since sales began in 2019, and residents can expect the industry to continue to grow, a state official said.

Two dispensaries operate in Benton County and another two in Washington County. The fifth, Natural Root Wellness, recently received a license to operate in south Fayetteville, said Scott Hardin, spokesman for the Arkansas Department of Finance and Administration. State law limits each county to four dispensaries.

The four dispensaries in Northwest Arkansas have sold a combined total of about 7,100 pounds of medical marijuana, or about 30% sold in the state, Hardin said.

Dispensaries in Arkansas have sold 24,067 pounds since the first dispensary opened in May 2019, totaling $154 million of medical marijuana as of Sept. 29, according to Hardin.

"The market really saw an increase in mid-March and that increase has held," Hardin said.

Hardin said a combination of factors probably contributed to the sales volume, including the covid-19 pandemic that spread to the U.S. in January and stimulus checks the federal government began issuing in April.

Another factor is the steady increase in the number of residents allowed to buy medical marijuana over the past 14 months. More than 85,000 people are registered compared with about 40,000 in February, according to Hardin. Doctors do not prescribe medical marijuana as they do other medications, but rather, verify that patients have qualifying conditions that make it legal for them to obtain medical marijuana cards. Patients are limited to buying 2.5 ounces of medical marijuana every 14 days.

"We anticipate the patient growth is directly related to access to the medicine," according to Hardin. "Numerous dispensaries across the state have opened their doors for business in 2020. Many patients did not want a card if medical marijuana was not accessible within a reasonable drive. As dispensaries have launched in new areas of the state, the patients in that area took action to obtain a card. At the current pace, it is only a matter of time until the state surpasses 100,000 patients."

Hardin said he was not allowed to share how much revenue was generated from individual dispensaries, citing the Tax Procedure Act.

Hardin said dispensaries are allowed to grow, process and transport marijuana in addition to selling it. Many dispensaries, including ReLeaf, The Source and Acanza, indicated in their original applications that they planned to eventually add grow sites. The state must inspect their grow sites to ensure they meet regulations, such as proper security, before they are allowed to begin growing. Dispensaries' grow sites must be attached to the dispensaries.

Acanza in Fayetteville is the only dispensary in Benton and Washington counties the state has approved to begin growing marijuana on site, Hardin said. The ReLeaf Center and The Source in Bentonville have both said they eventually plan to grow on site, while Purspirit Cannabis in Fayetteville has said it does not plan to do so.

Acanza plans to have its products available Nov. 1, said Randi Hernandez, owner. She said growing on-site will help the business fill a gap. Cultivators have been limiting the amount of product they will sell to the business over the past few months, she said.

The dispensary shortened its sales day by about an hour because of covid-19. Hernandez said Acanza would have likely run out at times if it were open longer.

The state's Alcoholic Beverage Control Division, which regulates the medical marijuana industry, is looking into the supply issue, he said.

"Due to this extreme increase in demand, as well as a steady increase in total registered patients, it has caused every facet of the industry to be impacted, it appears. Cultivators, similar to dispensaries, are doing their absolute best to keep up with this increased demand as well, to supply us with enough product to provide ReLeaf to as many patients as possible," Matt Shanksy of The ReLeaf Center wrote in an email.

Cultivators don't have a minimum or maximum on how much marijuana they are allowed to grow. Dispensaries that grow are limited to 50 mature plants, Hardin said.

The Source in Bentonville recently bought property on West Poplar Street in Rogers where it plans to have a grow site and move its retail operations once construction is complete, said Erik Danielson of The Source.

Danielson said the The Source has experienced high patient volumes over the past several months, but keeps a large backstock. The business had to renovate its space to accommodate the demand, he said.

The ReLeaf Center is almost finished building a greenhouse outside its dispensary, according to Shansky.

"If all goes as planned, we expect to begin our in-house cultivation operations towards early November, with the goal to have our first in-house harvest by the end of the year or early 2021," he wrote in an email. 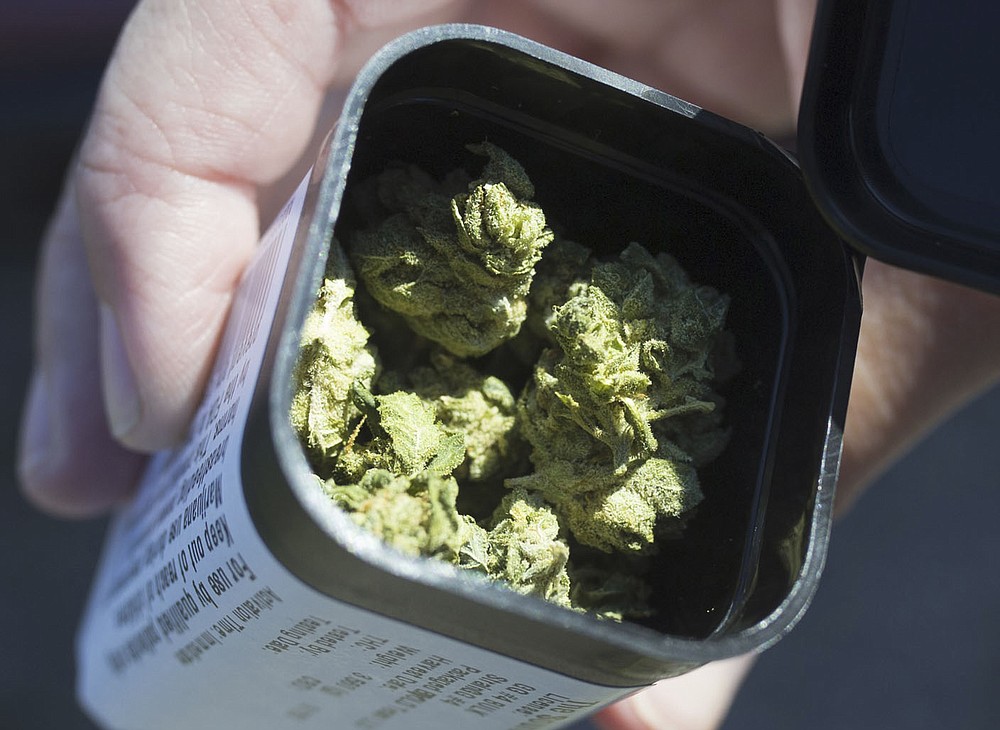 Brenna Hawkins of Bentonville holds a container of medical marijuana in August 2019 at The Source in Bentonville. Medical marijuana sales in Northwest Arkansas have amounted to about 30% of the state total since sales began in 2019, and residents can expect the industry to continue to grow, a state official said. (File Photo/NWA Democrat-Gazette/Charlie Kaijo)
ADVERTISEMENT