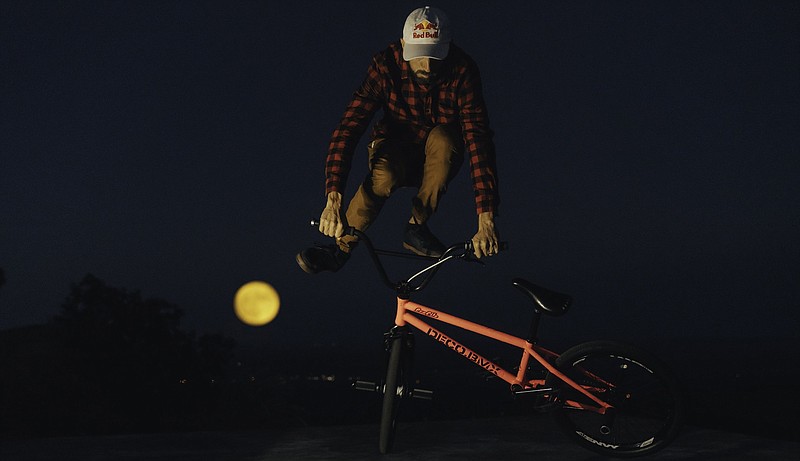 On Oct. 1, under the Harvest Moon, Terry Adams was doing what he does best — performing tricks on his bike.

Adams, 37, an X-Games gold-medal-winning flatland BMX rider, was on a specially built platform at Sunrise Point in Mount Nebo State Park, pulling off mind- and body-bending tricks on his bicycle as the golden moon ascended over the Arkansas River Valley.

The impetus behind the timing and setting was twofold. Adams had always wanted to perform flatland tricks on the edge of a cliff, and the symbolism of the new moon — after being grounded at home in Hammond, La., by the coronavirus pandemic — was too tempting to ignore.

"The Harvest Moon means new beginnings," he says from Fayetteville on the day after the session. "With covid-19, I've been stuck at home. Normally I'm traveling full time, riding contests and doing photo and video shoots."

Since the pandemic, Adams, who has been sponsored by Red Bull for 17 years, had his travel schedule cut severely.

"To come out here was very inspirational," he says. "It was a nice reset to everything I've been doing."

At Mount Nebo, a crew that included Adams' friend and fellow BMXer Corey Martinez built a 16-by-20-foot platform at Sunset Point, where Adams would do his thing on his signature Deco TA flatland bike.

"I've done a lot of photoshoots over the past 20 years," he says. "I've done shoots where I go through fire, some where I'm on top of buildings, but this shoot I will remember for the rest of my life. It was so different and so surreal. It was incredible."

Rose said in a news release that he was hoping to bring together "two elements that seemingly shouldn't exist together — flatland BMX and the craggy cliffs of these Arkansas mountains — coinciding for a brief captured moment in harmony."

Adams and Rose also visited Stouts Point at Petit Jean State Park earlier in the week for a daytime photoshoot.

Adams was around 8 years old when he started out as a BMX racer. It didn't take long for him to fall under the spell of learning tricks.

"There were always guys beside the tracks doing tricks and stuff. That was more of the freestyle side of BMX. I was really drawn to it because there were no rules or anything. I love that style of riding. I stopped going to the track and started putting all my time and energy into flatland. It's pretty much like an art form."

Flatland riding is almost like ballet with a bike. Or perhaps break-dancing with a bike. Riders perform complicated tricks, often spinning on one wheel like an ice skater doing pirouettes and climbing all over their machines while maintaining enough momentum to stay upright and not dab the ground with their feet or fall over in a heap.

Tricks can take months to learn, but that was part of what attracted the self-professed, obsessive Adams to the discipline.

"It's pretty time-consuming," Adams says. "I think a lot of people get bored or become frustrated. You might spend six weeks or four months on something before it even feels like you're going to come close to getting it."

Flatland bikes look like regular BMX rigs but have slightly shorter frames and a pair of footpegs protruding from the hubs of each wheel.

Competitions are judged events where riders complete a series of tricks during sessions that can last from 90 seconds to 3 minutes. Riders are judged on categories such as difficulty, flow, style, originality, consistency, trick variety, bike control and execution, according to the Union Cycliste Internationale, cycling's governing body.

Adams, who is married and has a young son, has won two Number One Rider Awards and took first place at the 2005 Asian X Games in Seoul, Korea, among other highlights in his competitive career.

"I learned it during the storm," he says. "There was no electricity, and it was a tough situation. We didn't have [air conditioning] and Louisiana is so hot. So I took that time to go outside on the street in front of my house and come up with this crazy trick."

Like most flatland skills, it seems to defy logic and physics.

Since the pandemic curbed his travel, Adams has been working on tricks and keeping healthy.

"I put a plan together for a better diet and better workouts," he says. "With my obsessive behavior, though, I was kind of wearing myself out. So Red Bull has a high-performance team, and they helped me put some variety in my diet and helped with the workouts and made sure I have proper rest days."

Flatland contests have moved online, he says, and he's been working on video submissions for events.

"It's great because flatland can be done anywhere, and there are a lot of [online contests] going on," he says. "I think that will be going on for a while as we wait for the world to open back up."