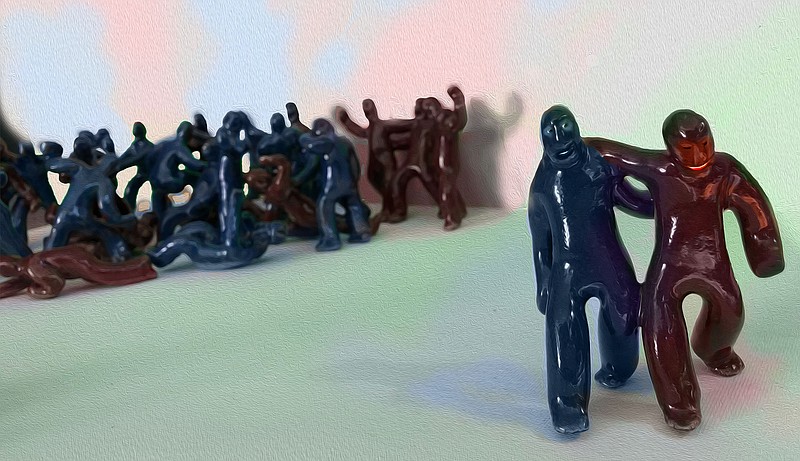 What's that line? Something about not talking politics and religion in polite company?

It makes sense. Step into a political discussion, especially with someone whose views don't align with your own, and emotions can run high.

Of course, this is nothing new, but we seem to be in a particularly polarized political environment.

There is a constant stream of news and social media posts about the pandemic, protests against police violence, the election and a president whose words and actions draw diametrically opposed interpretations. The mere mention of politics at the dinner table can lead to scorched-earth scenarios complete with hurt feelings and damaged relationships.

But what if we learned how to speak about our politics civilly? What if we could talk politics with the family, friends, neighbors, even strangers who don't agree with us, not get angry and emotional — and actually learn something useful and positive?

Just after Donald Trump was elected president, a group began bringing people with opposing views together to respectfully discuss their differences and maybe even find some common ground.

Braver Angels was founded in December 2016 by David Blankenhorn, Bill Doherty and David Lapp who were disturbed by what they saw as a deepening political polarization across the nation.

At one of their first events, called the Red/Blue Workshop, they gathered 21 people — 10 Trump supporters and 11 supporters of Hillary Clinton — in South Lebanon, Ohio, to discuss their differences and learn one another's stories.

"They could listen to each other's points of view once they saw one another, not as stereotypes, but as neighbors in a country they shared," the group says in a statement at its website, braverangels.org.

There's even a Braver Angels pledge:

As individuals, we try to understand the other side's point of view, even if we don't agree with it.

In our communities, we engage those we disagree with, looking for common ground and ways to work together.

In politics, we support principles that bring us together rather than divide us.

Glen White, a semi-retired clinical psychologist from Little Rock, was immediately intrigued when he heard about Braver Angels. (The group was originally Better Angels, a term taken from Abraham Lincoln's first Inaugural address: "We are not enemies, but friends. We must not be enemies. Though passion may have strained it must not break our bonds of affection. The mystic chords of memory, stretching from every battlefield and patriot grave to every living heart and hearthstone all over this broad land, will yet swell the chorus of the Union, when again touched, as surely they will be, by the better angels of our nature." But the Better Angels Society, a nonprofit dedicated to documentary films relating to U.S. history, already had the name.)

"It was shortly after the 2016 election and I was distressed with the way things were going," the 65-year-old White says.

He saw an interview with Braver Angels co-founder Blankenhorn on the CNN program "Global Public Square."

"Their goal was to ... use methods from family therapy and relationship work and apply it to working with people who have differing views politically," White says. "I thought, that sounds like what I need to be involved with."

He joined the group through its website (dues are $12 a year) and was soon connected with others to start an Arkansas chapter in 2017.

Braver Angels of Central Arkansas, like the national group, organizes workshops and presentations. The Arkansas chapter has about 40 paid members throughout the state and six active volunteers who help organize events.

Braver Angels classifies members as conservative-leaning Reds and liberal-leaning Blues. There are also Others, who "do not lean either Red or Blue."

The group acknowledges on its website that "a person may be inclined Red or Blue but not agree completely with that party's candidates or positions on all issues."

White, who grew up in Mississippi in a conservative household, identifies as a Blue.

"The endgame here is improving relationships," he says when describing the work of Braver Angels. "More than anything else, it's not details or facts that get people to work together respectfully, it's developing a relationship. Within the context of that relationship, you start to see the other person as a real human being, and you are less likely to have a distorted, negative view of them."

Katie Zakrzewski, 22, lives in Little Rock and is a staff writer for AY Media Group. She volunteers with the Arkansas Braver Angels chapter.

A recent graduate of the University of Arkansas at Little Rock, she served as student body president, is a Republican and is part of several bipartisan groups including Citizens' Climate Lobby.

"In a lot of the bipartisan groups I'm in, they are usually very topic-oriented," she says. "It doesn't matter what your viewpoint is outside of this topic, but on this topic, we all agree and are working toward the same goal."

In Braver Angels, she says, "you have to be aware of what other people's viewpoints are and reveal your own viewpoints. There are exercises where you pretend to be somebody of the opposite political party. You learn a lot more not only about where you stand, but where other people stand."

Zakrzewski says she has taken some heat for her political views. Her support of Trump and her "hard-right" views left her ostracized by some of her friends.

"I was on a college campus and I voted for Trump. I didn't get re-elected to a lot of my club positions ... I had a major falling out with a lot of the people I knew. Of course, a lot of it was me being stubborn, but a lot of it was people having been mentally trained that the other party was the enemy ... It was really rough to reconcile my political beliefs with the fact that the majority of people I knew hated them."

Over time, Zakrzewski says, her views have changed somewhat.

It's a common refrain, but the 2016 presidential race was a tipping point for Braver Angels volunteer Mary Hunt of Little Rock.

"I became distressed during the 2016 campaign," the 65-year-old Hunt says. "All the rhetoric and the lack of respect and lack of civility."

She attended a Braver Angels workshop and realized that "instead of just talking about the lack of respect, I can actually do something to help."

Hunt, who is retired from Fidelity National Information Services, is a Blue though she says her views lean toward the center.

"I'm more of a purple, with a bluish cast. I looked that up and found that it's called periwinkle."

Working with Braver Angels, she says, has helped her to understand those with differing political views.

"I realized I wasn't hearing the other side. And what I was hearing, I was criticizing. I wasn't listening for understanding. So I started to tune into Fox News and more conservative radio stations. It's opened up a lot of understanding within myself as to why people feel the way they do. I may not agree with it, but I have respect for everyone. When you're speaking with people with a different view, they can sense that [respect]."

April Chatham-Carpenter, a professor and chair of the Department of Applied Communication at UALR, started volunteering with Braver Angels last fall.

"If we were in a situation in our country where we were already doing a good job of talking with each other across the political divide, then perhaps Braver Angels wouldn't be necessary," she says. "But we have an even more polarized nation than we had in 2016. We don't know how to talk to each other."

Chatham-Carpenter, 58, identifies as Red with shades of purple.

"Even if we don't have policy in common — immigration, gun control — even if we don't agree, we can at least have common ground in our common humanity," she says. "Anybody who is able to come to that point is able to say, 'I'm willing to cross over the aisle and work with you.'"

The language of the far right and left, she says, is damaging.

"I'm a communication person. Their language and rhetoric tears down the other side so that they don't look human anymore."

Says White: "That dehumanization process is a really scary thing at a societal level and can result in a government with people on both sides that won't compromise, and nothing gets done."

In extreme cases, he says, polarization can erode democracies and lead to authoritarianism.

Braver Angels isn't trying to change the way people think on concerns and their parties but, Chatham-Carpenter says, "it takes a moving toward the middle, toward the other person as a human, in order to participate in this organization."

"I think," says Zakrzewski, "that if you can talk to people in a way that relates to them, asking them in a non-attacking way: Why do you feel the way you do? What is your story? Once people see you're trying to seek common ground instead of instigating a fight, that makes people more likely to share things with you that they might not have shared otherwise."

It's 6 p.m. Oct. 5, and 27 people are logged onto the most recent Braver Angels of Central Arkansas program on Zoom.

It is not a political discussion, but rather an exploration of political polarization and ways to combat it.

Hunt moderates a panel that includes White, who talks about social sciences research into polarization; Chatham-Carpenter, who addresses communication practices to help improve political conversations; and retired psychologist Jerry Henderson, who speaks on the detrimental impact of polarization on democratic governments.

At the end, participants, some from as far away as California, ask questions of the panelists and share comments.

It is a small thing, a handful of Americans quietly getting together online for 90 minutes on a Monday night to learn how to better get along with other Americans. 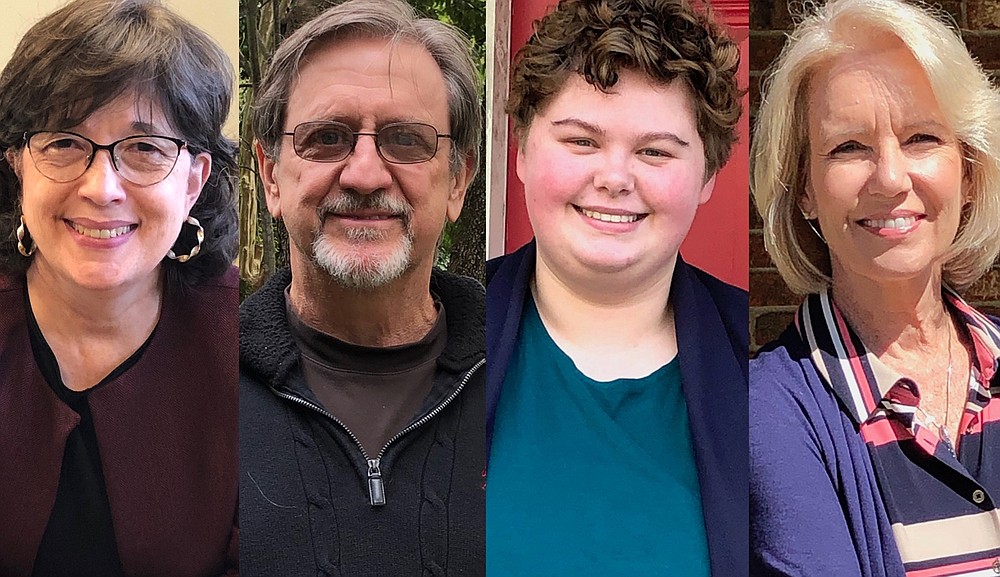 “Having Conversations Across the Political Divide”

Both events are free and hosted in part by the Central Arkansas Library System and the Applied Communication Department of the University of Arkansas at Little Rock.