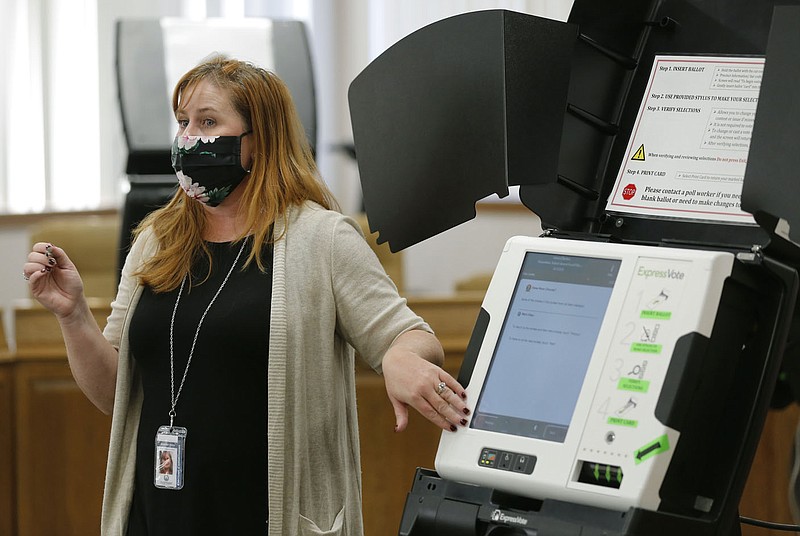 • Oct 27: Final day to request an absentee ballot be mailed.

• Nov. 2: Final day to request an absentee ballot in person.

BENTONVILLE — The menace of covid-19 has added an extra layer to election planning, local officials said.

Benton County honed its covid-19 election plan with a runoff election in late March and the Bethel Heights annexation election in August.

“Those elections were helpful in seeing if what we implemented worked, and they did,” said Kim Dennison, Benton County election coordinator.

Voters used a stylus to sign in, then took the pen to a voting machine and used it to touch the screen instead of using their fingers. The pen was dropped into a sanitizing bucket after each use.

The touch screens were cleaned after each use, Dennison said. Acrylic shields separated poll workers from voters.

“The stylus were a great idea as it cut down on cross contamination all the way through the polling site,” Dennison said.

Election officials in Benton and Washington counties have set up a detailed list of procedures from check-in to leaving.

A poll worker will tell a voter when to go to the check-in station and hand them a blank ballot and an unused stylus. The voter will go to check-in and place the ballot in a printer.

Voters will be asked to show an approved photo ID and state their name, address and date of birth. Election officials will verify the information with the voter’s registration on a computer tablet. The voter will sign the tablet with the stylus.

The procedure in Washington County is the same.

Washington County poll workers also went through training, said Jennifer Price, executive director of Washington County’s Election Commission. Attention was paid to check-in procedures and how to use the voting equipment, such as the tablets at check-in and the voting machines, she said.

“The safety protocols were additions to the normal poll worker training that we conduct,” Price said. “We are just training more than we have between the primary and the general election.”

Voters don’t have to wear masks at a polling site, but Dennison is trying to get some donated for voters. Masks for poll workers are provided, but don’t have to be worn per an executive order from Gov. Asa Hutchinson, Dennison said.

Washington County election officials will provide masks, face shields and gloves to its poll workers and encourage them to wear them, Price said.

Benton County has 150 acrylic shields for early voting, said Bryan Beeson, facilities administrator. The county will use its Clorox360 sanitizing machine before voting starts and after it ends at the early voting sites, Beeson said.

“At the end of the day, we understand our poll workers have families to go home too,” Dennison said. “We sanitize all voting equipment after every voter has voted. We have hand sanitizer available after you have voted, and we will have equipment spaced at least 6 feet apart in the vote centers.”

Recommendations for election officials and poll workers from the federal Centers for Disease Control and Prevention include social distancing, adequate supplies of hand sanitizer and signs and messages that detail how to stop the spread of germs. The CDC also recommends surfaces are disinfected, voting equipment is cleaned, the use of shared objects is minimized and crowd line management is implemented.

Washington County made sure social distancing was clearly marked while voters waited in line and hand sanitizer was available during the Bethel Heights annexation election.

Poll workers were provided face masks, face shields and gloves, according to the county website. Acrylic shields between voters and poll workers were used, and voters each received a stylus.

“The special election required the Election Commission to think through the process of how to conduct an election with new safety procedures,” Price said.

“We were able to work through different situations and think about what should we do for the general election. We think all of our plans worked well. We just refined some of the ideas. The stylus pens were great, and we really focused on minimizing contact between the voter and the poll workers.”