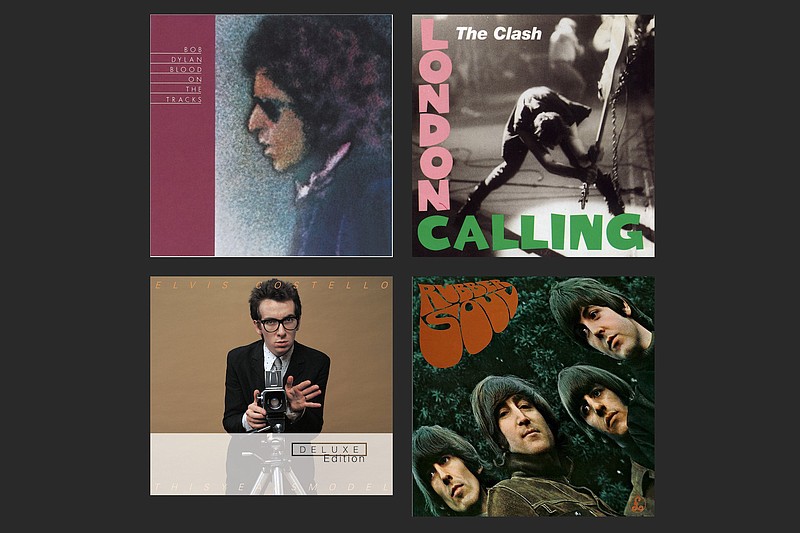 I have some thoughts about Rolling Stone magazine's recently updated "500 Greatest Albums of All Time."

But I should acknowledge the dubiousness of the entire project. It doesn't matter. Any attempt to create a canon of rock 'n' roll is itself an anti-democratic and therefore un-rock 'n' roll thing to do. Caring about anyone's list of the 500 Greatest Albums of All Time is like caring about who is or isn't in the Rock and Roll Hall of Fame: It's a very square and nerdy thing to do.

That said, it's often fun to argue about things that mean nothing. That's why we like sports. There are pleasures available to the nerd that normal, well-adjusted people will never know. Our only purpose here is to have a little fun. That is the spirit in which this exploration is intended. And that's rock 'n' roll to me.

Music isn't a competition. The desire to rank, to organize art into some sort of hierarchical structure, better serves the interests of marketers than it does anyone pursuing pleasure or edification through music. Because music exists apart from language, because, like love and God, it works on us in visceral and irrational ways, no verbal vocabulary is sufficient to describe it.

While that doesn't mean — as some have suggested — that writing about music is futile, it does mean that anyone who means to write about music honestly must take notice of its surrounding mysteries. Why does the air shudder in a certain way for a certain artist, but not in the same way for imitators? Why is that we can identify Clapton or Knopfler by one or two notes if a guitar string doesn't know whose finger is touching it?

When I was a kid I used to pay a lot of attention to the "blindfold tests" conducted by Leonard Feather for Downbeat magazine, where the critic would play pieces of music for jazz musicians who were not given any information about the recordings.

Then they would talk about what they'd just heard. They'd guess who the players were (with astonishing accuracy) and talk about the architecture of the arrangements and the style of the performance, and finally assign a quality score of one to five. Feather would record these observations, edit them and publish them. They are fascinating. (The second test he conducted with Charles Mingus is especially interesting; you can find it online at: charlesmingus.com/mingus/blindfold-test.)

But as much as I enjoyed reading them, the blindfold tests might have put me off jazz a little, in that they suggested that you needed to have a lot of specialized knowledge and a finely tuned ear to even begin to get it; if you were a person of average sensitivity the dynamics and the nuances of jazz would be lost on your Philistine ears. It didn't help that a lot of the people I knew who were into jazz also seemed to believe that their passion was beyond the ken of mere mortals — that it was somehow "better" than the disposable pop — rock, country, soul — music that was available on the radio.

It was the smugness — real and perceived — of jazz fans that kept me from actively listening to jazz until I was well into my 30s. I deprived myself because of the snobbery of people who should never have been granted standing in my personal court of taste, the sort of people I imagine sit around making lists of the "best," "greatest" and "most virtuosically performed" records of all time.

Frank Sinatra — curiously underrepresented on this list, with only "In the Wee Small Hours" from 1955 showing up at No. 282 — might have been the first pop artist to explore and exploit the possibilities of the album form.

And "In the Wee Small Hours" — his first real album, might be where the album era began.

While rock-centric, it's not a list of the greatest rock 'n' roll albums of all time. So we shouldn't be surprised that a lot of the albums on the list aren't rock 'n' roll. Arguably, the No. 1 album on the updated list — Marvin Gaye's "What's Going On" (1971) — isn't rock 'n' roll but a soul/jazz/pop fusion album. Which is perfectly OK, though I would argue it's not Gaye's best album (which would be "Let's Get It On," which sneaks in at No. 422) and certainly not the greatest album of all time.

I love "What's Going On," but the reason it places where it did in the poll is because our times have caught up with the concerns Gaye expresses in its lyrics. It's a political choice, not because anyone rigged the poll but because with all that's going on in the world today a lot of voters had it near the top of their minds when they cast their ballot.

While I'm not quite clear on Rolling Stone's methodology, I feel like "What's Going On" probably had a lot of Top 10 votes, but relatively few voters would have chosen it as a No. 1. Maybe if the poll had been taken a few days earlier or later, another album would have emerged as No. 1.

We shouldn't see this as a weakness or failure of the poll, because most of us probably have a different favorite album from day to day. If we were to scratch out a Top 10 list, about the best we could produce would be a snapshot of our preferences at the moment.

That list betrays a good deal of demographic information about me. There's only one album from this century ("Southeastern"), and six of the 10 are from the '70s. It all fits under the general rubric rock music: Nine of the artists are white, it's overwhelmingly male with only two women represented, and — maybe most importantly — there's only one album ("Proof Through the Night") that isn't a part of Rolling Stone's would-be canon. You might guess it's a list made by a baby boomer born in the '50s, who likes vocal music and guitars and drums in four/four time.

Even as I finished writing that list I began to criticize it. The Beatles' "Revolver" is a slightly better album than "Rubber Soul," even if I prefer "Rubber Soul." I should have had more diversity; Ray Charles' "Modern Sounds in Country and Western Music" should probably have been on there; so should Public Enemy's "It Takes a Nation of Millions to Hold Us Back." I should add some Al Green. Or Lucinda Williams — whose 1988 "white album" (No. 426 in the RS list), I prize more than her 1998 breakthrough "Car Wheels on a Gravel Road."

T Bone Burnett has told me he doesn't like the production of "Proof Through the Night;" it bothers him so much that he's tried to re-record most of that material. Still, the record matters to me and I can argue for it, even against the guy who made it. Because what I'm arguing for is my "Proof Through the Night," the Aristotelian version I carry around in my head. One that, in some ways, nobody else can hear.

My instant list would have been very different if I'd been asked for the most important albums of all time, or my favorite albums of all time. A favorite album could be completely obscure, but an album can't be important unless it's had at least some success in the marketplace (the Velvet Underground — who placed four albums on the RS list — might be the least successful important band of all time) but it seems that greatness has no correlation to commercial success and therefore would be the most difficult to identify, for the simple reason that there are likely great albums that very few of us have ever heard.

Aside from the No. 1 entry, I can basically go along with the RS Top 10, and this makes me uneasy. I stopped paying attention to a lot of pop music around 1995. Every year there are a few albums that capture my attention — and where is James McMurtry's "Complicated Game" (2015), I'd like to know? — but the truth is that you can't hear everything. The pop music landscape has become beautifully balkanized, and while our digital technologies have destroyed the dreams of making a living wage for a lot of musicians, it has presented us with a seemingly depthless supply of new (to us) music.

Mostly I listen to (and write about) reissues these days. I do not consider myself all that hip to the new sounds the kids dig. So it is more than a little worrisome that I'm familiar with nearly every album that made it onto the RS list.

Surely that cannot be right.