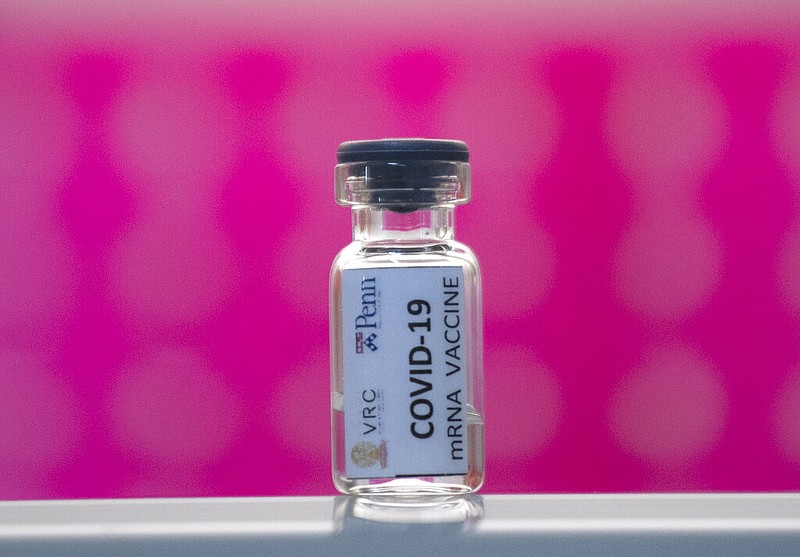 FILE - In this Monday, May 25, 2020 file photo, a vile of a covid-19 vaccine candidate on a shelf during testing at the Chula Vaccine Research Center, run by Chulalongkorn University in Bangkok, Thailand. - Photo by AP/Sakchai Lalit

Arkansas' count of coronavirus cases jumped by more than 1,100 for the second day in a row Friday as the number of people hospitalized with the virus in the state rose to a record for the fourth straight day.

The state's case count grew by 1,167, while its death toll from the virus, as tracked by the Department of Health, rose by 27.

Excluding the deaths of 139 probable cases that were added to the state's tallies on Sept. 16, that tied with Sept. 2 for the biggest one-day increase in the state's death toll.

The number of cases in the state that were considered active, meaning the person tested positive and had not yet recovered or died, rose to a new high, 7,468.

"Yesterday was another record day of testing with almost 14,000 total tests performed," Gov. Asa Hutchinson said in a statement.

"Our new cases continue to be too high. As we all go about our weekend, let's make sure to wear a mask and keep our distance. We are constantly reminded of how serious this virus is and how easily it can spread."

"We know that a certain proportion of them are going to end up in the hospital on the ventilator, and it's distressing to watch that happen," she said.

She said she's heard "anecdotal reports" of stores not enforcing the state's requirement to wear masks among employees and customers, as well as of "social gatherings that are including more people than can safely socially distance, and people not using face coverings."

The virus also continues to spread in churches where public health guidelines aren't being followed, she said.

"We definitely want to turn the situation around, because it is causing stress on our hospital system," she said.

The cases added to the state's total included 980 that were confirmed through polymerase chain reaction, or PCR, tests.

The other 187 were "probable" cases, which include those identified through less-sensitive antigen tests.

Already at a record level since Tuesday, the number of people hospitalized with the virus in the state rose by 13, to 560.

Those patients included 101 who were on ventilators, down from 103 a day earlier.

Dillaha said 17 of the 27 deaths were among nursing home residents. One death was from mid-August, three were from early September and the rest were from "mid-September on."

"It usually takes about three or four weeks for us to get death certificates," she said. "It can be sooner, but a lot of times it takes that long,"

The number of confirmed or probable cases that were considered active rose by 398 as 742 Arkansans were newly classified as having recovered.

The active case total surpassed the state's previous high of 7,387 as of Aug. 9.

The number of people who have ever been hospitalized in the state with the virus rose by 56, to 5,861.

The number who have ever been on a ventilator rose by one, to 724.

The 12,715 PCR tests of Arkansans that were performed Thursday and the combined total of 13,940 PCR and antigen tests both set one-day records for the numbers reported in the state's daily coronavirus updates.

Friday's increase in cases was the state's fourth-highest since the pandemic arrived in the state in March.

It followed a record-setting jump of 1,265 cases Thursday.

Over a rolling seven-day period, the average number of cases added to the state's tallies each day rose by 30, to 790.

After mostly falling for a few days, the average daily increase began rising Thursday. As of Friday, it remained below the state's peak average of 838 cases a day that were added during the seven-day period ending Sept. 25.

The state's count of confirmed and probable cases rose by 109 in Washington County, 94 in Pulaski County, 88 in Craighead County, 81 in Sebastian County, 56 in Benton County, 48 in Carroll County, 40 in Faulkner County and 40 in Lincoln County.

Among prison and jail inmates, the state's count of cases rose by 81.

While Arkansans age 65 or older made up an outsize portion of the cases increase Thursday, it was younger people who stood out in Friday's increase.

Arkansans age 18-24, who make up about 10% of the state's population, accounted for 14% of the cases added to the state's total Friday.

Those age groups each represent about 25% of the state's population.

Meanwhile, Arkansans age 65 and older, who make up about 17% of the state's population, accounted for just 15% of the cases added Friday.

At St. Bernards Medical Center in Jonesboro, mass testing of more than 2,300 employees didn't turn up any new cases as it wrapped up Friday morning, hospital spokesman Mitchell Nail said.

From Oct. 2 through Thursday, the testing, which started in response to a cluster of cases among employees, identified 133 cases, he said.

He said the testing was of employees involved in patient care as well as others who volunteered to be tested.

Two private schools are among the most recent to announce shifts to all-virtual instruction in response to virus cases.

"Our staff made the choice to be aggressively proactive after a small, but brief window of positive cases were confirmed," Curtis said in an email. "Because we are an extremely close and connected community, these cases could have had the potential to impact our entire school in a number of ways throughout our families, faculty, and students."

The school, affiliated with Harding University, has had eight faculty and staff members either test positive for covid-19 or enter quarantine, Simmons said. He said 24 students have tested positive or entered quarantine status.

"We're still trying to continue with education for our kids to keep them connected to school and engaged in the learning," Simmons said. The temporary shift affects students in kindergarten through 12th grade, and the school has an enrollment of more than 500 students, Simmons said.

Meanwhile, the Little Rock School District announced that Central High School and Forest Heights STEM Academy, which were closed to in-person instruction this week because of virus cases, will continue with all-virtual classes next week.

In-person classes at both schools are to resume Oct. 19.

"We continue to encourage all of our Central family to follow Arkansas Health Department guidelines and stay safe," Central High Principal Nancy Rousseau said in a Facebook post.

Classes for eighth graders at Forest Heights STEM Academy will also continue to be online next week, the district said.

The district also said classes for second graders at Bale Elementary will be all-online through at least the end of next week.

On Thursday, the district reported that one employee at the school had tested positive, and seven other employees and a student had been required to quarantine after coming in contact with an infected person.

On Friday, it said an additional six staff members and 24 students had been required to quarantine.

In its daily covid-19 update, the Little Rock district said two students -- one at Dunbar Magnet Middle School and one at Stephens Elementary School -- had tested positive in the past 24 hours.

In addition to those quarantined from Bale Elementary, three students at Southwest High School and one at Mann Magnet Middle School were required to quarantine, as was one employee at the Fair Park Early Childhood Center.

Maumelle High School, which shifted to all-virtual instruction Tuesday, also will be closed to in-person instruction next week, according to an announcement on the school's website. Academic and extracurricular activities are also suspended for the week.

"At this time, we are not aware of any additional positive covid-19 cases," said the school, part of Pulaski County Special School District. "However we have a substantial number of students and staff under quarantine who were identified as probable close contacts."

In-person classes at the school are set to resume Oct. 19.

The day before, the district announced that it had learned of a staff member at Jacksonville Middle School who tested positive, resulting in eight staff members and seven students being sent home to quarantine.

The University of Arkansas, Fayetteville listed 28 active cases Friday, a slight drop from the 33 active cases reported on the university's website.

The state's count of virus deaths increased by five in Sebastian County, four in Pulaski County and two each in Cross, Jackson and Jefferson counties.

The state's count of deaths among nursing home and assisted-living facility residents, as tracked on the Health Department's online dashboard of coronavirus information, increased by 20, to 541. 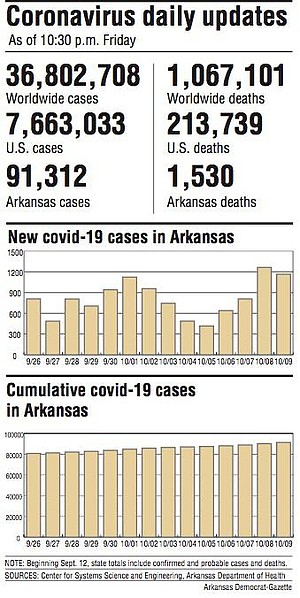