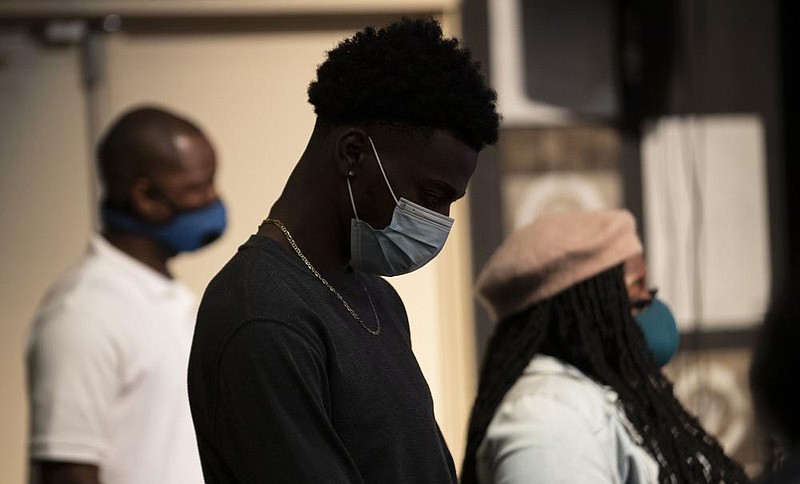 Wearing masks and social distancing is the rule for all those attending church services on Sunday morning at Experience Christian Center in Orlando, Fla., on Sept. 27. The roles are changing for Black pastors during the pandemic and the political burdens on them have grown in this election year. (Orlando Sentinel/TNS/Willie J. Allen Jr.)

ORLANDO, Fla. -- As the Rev. Terence Gray stepped onto the stage at The Experience Christian Center to give a guest sermon on Sunday, about one-third of the 250 chairs in front of him were covered in black cloth so that attendees would sit socially distanced from one another.

About 60 masked people watched him. Three women in white lab coats -- church members who are also medical professionals -- were tasked with checking the temperature of every person who walked inside, asking a series of questions to make sure no one had a cough, a fever or a sore throat.

Gray opened with the forthcoming election.

"Brothers and sisters ... your mind needs to be attuned to the varied challenges and strategies that are going to be devised to deter persons from being able to cast their vote," he said to the predominately Black Pine Hills congregation.

Even as many religious houses remain closed, Central Florida's Black ministers have become a beacon of hope for church members looking for more one-on-one guidance when the future seems uncertain.

This has been an unprecedented year marked by a pandemic that has been disproportionately deadly in Black communities, a monthslong wave of nationwide protests against police killings of Black people and what is being seen as one of the most pivotal presidential elections of this generation. As the nation has had to cope, Black church leaders say they are busier than they have ever been.

They have become advisers to law enforcement leaders looking to repair relationships with the communities their officers patrol. They are facilitators for young activists who led massive demonstrations this summer and have created a list of demands for change.

They are providers for the neighborhoods surrounding their churches when thousands of workers are laid off or furloughed and are now struggling to buy food for their families. They are guides for white pastors who feel led to preach to their predominately white congregations about the perils of racism and inequality.

And as the needs of the community shift, the church keeps shifting.

"The real pastors are showing up," said Gray, who leads St. Mark African Methodist Episcopal Church, which is offering only online services. "I work harder now than I did before [covid-19]."

The Sunday that Gray was invited to preach was The Experience Christian Center's third back to in-person services, said Derrick McRae, bishop-elect at the church.

Despite the church closures, McRae said he, too, has been busier than ever. As each new crisis has emerged throughout this year, McRae and other church leaders have had to find ways to respond.

In a normal year, the church organizes several food giveaways, usually tied to major holidays like Thanksgiving and Christmas.

In March, when the economy shut down, leaving thousands without money to buy food, Second Harvest Food Bank of Central Florida along with other food banks nationwide reported a massive spike in need.

"We were getting food from all over the state and we were loading it up and going to different communities and just having food giveaways," said Marlin Daniels, chief development officer for The Experience Christian Center. "People that didn't even know the church existed started showing up. ... It was supposed to last for 200 to 250 families and we were going through it within an hour."

More recently, the church partnered with Foot Locker to provide shoes for families in the Parramore neighborhood as its leadership readies for larger food giveaways ahead of Thanksgiving and Christmas.

"They still need to know there is hope in the community," Daniels said of the residents benefiting from the work of the church. "That's what the church is for. The church is a place not only for the spirituality but also for the physical being as well. We can't preach the gospel and talk about the love of God and not reach them tangibly with food and clothes."

After protests sparked by the May death of George Floyd, who pleaded for air for nearly 9 minutes while since-fired Minneapolis police officer Derek Chauvin held his knee to Floyd's neck, pastors all over the Central Florida region met with city leaders, sheriffs and police chiefs. They called for community peace and joined activists in the streets.

As the time came to start considering what change activists wanted to see come from the protests, Pastor Roderick Zak, who leads Rejoice in the Lord Ministries, a 3,000 member predominately Black church in Apopka, Fla., offered to help.

In the 1990s, Zak, as then-president of the Orlando chapter of the Southern Christian Leadership Council, organized local marches calling for accountability and equity after Los Angeles Police Department officers were caught on camera beating Rodney King. King's beating, like Floyd's killing, sparked a nationwide outcry.

The efforts of Zak and his fellow activists helped launch an alliance that increased public contracts for women- and minority-owned businesses in the mid-1990s. The alliance lasted about 10 years.

Nearly 30 years later, Zak opened his church for a meeting with activists and the Stono Institute for Freedom, Justice and Security, a human rights institution and think tank. It wasn't about projecting his own concerns onto the new movement, but rather making sure the new generation of activists would be able to clearly voice their own demands to those in power.

"I know what it's like to be out there trying to march and protest and let your voice be heard and negotiate with public and private entities for substantive change to take place," he said. "Advocacy, I know, can produce something if approached properly."

The demands presented so far by local activists have called for the declaration of racism as a public health crisis, the reallocation of some funding for the Orlando Police Department and the Orange County sheriff's office to combat that crisis, and deputizing citizens trained in de-escalation techniques to embed with law enforcement officers.

Now, as the November presidential election nears, the pastors have stretched their focus to consider how they can help ensure that every member of the congregations and the surrounding community will vote.

While some will surely choose to mail their ballots and others will vote independently early or on Election Day, McRae said he is encouraging those who would rather vote in person to do so early at the Amway Center during a Souls to the Polls event reimagined for the covid-19 era.

Souls to the Polls, traditionally held on the last Sunday of early voting, is usually marked by Black church leaders organizing buses to take their congregations to vote together after service. Those voters have the power to sway elections. In the 2018 primary, a surge of votes via Souls to the Polls helped Andrew Gillum win the Democratic gubernatorial primary.

This year, to encourage social distancing, there likely won't be any buses. Instead, individual cars or smaller carpools will be encouraged to take voters to the Amway Center, a space large enough to maintain space even if voting lines are long. McRae said the church has also chosen to partner with Black sororities and fraternities, the Florida Rights Restoration Coalition and other groups to have an even greater impact on the number of Black voters.

"We're all souls and we all need to go to the polls."