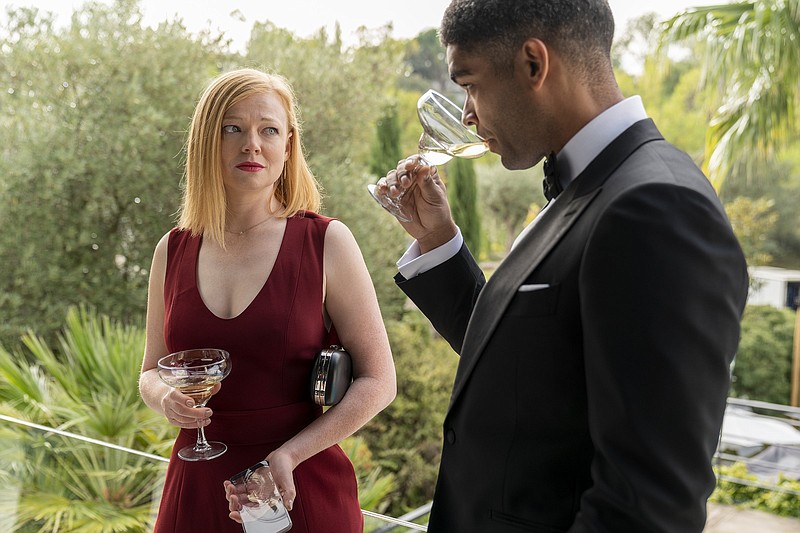 Sarah Snook (left) as Nikki, and Kingsley Ben-Adir as Franklin are among the cast of AMC’s “Soulmates.” (AMC/Jorge Alvarino)

"Have you taken the test?" the characters in AMC's coolly unsettling six-episode anthology drama "Soulmates" keep asking one another. It's difficult to escape into the show's premise long enough to remember that there might be any other test to take besides the one that detects the novel coronavirus.

These people, who live in the near future, are referring to the recently discovered "soul particle," unique in each person and supposedly identical to exactly one other person out there. Decoding the soul particle provides the ultimate matchmaking service, which claims to pair true soul mates — the perfect person for you.

Shrewdly marketed by a company called Soul Connex as an opportunity for lasting satisfaction, the process draws millions of people to one of 20,000 Soul Connex labs worldwide. The series, co-created by Will Bridges and Brett Goldstein, begins several months after the soul-mate revolution has changed how people think about love. Marriages can hardly withstand the pressure, as vaguely unhappy spouses slink off separately to a Soul Connex to see if the perfect match is still out there.

Imagine then, a sort of "Black Mirror" for the lovelorn — a set of techno-parables in which the promises of trendy science meet the pitfalls of human experience, with outcomes that range from the outright creepy to the quietly heartbreaking. (Bridges' writing credits happen to include some "Black Mirror" episodes.)

The first episode (premiering Monday) starts with the most obvious of "Soulmates's" theoretical dilemmas, as a fairly content suburban couple, Nikki and Franklin ("Succession's" Sarah Snook and "The Comey Rule's" Kingsley Ben-Adir) navigate the brave new world around them, in which friends are taking the test and choosing to dump their partners. The pressures on Nikki and Franklin, who have two children, are quietly intense. Nikki senses just enough dissatisfaction in the relationship to be tempted, but how would she ever be able to admit to Franklin if she did take the test? And what would she do with the results?

The subtleties in this episodes are some of "Soulmates's" strongest moments. Unfortunately the show moves on from there to a pile of other what-ifs, in which the stakes have been considerably and sometimes melodramatically raised:

We could play this game of pitfalls all day — and, indeed, AMC has already ordered a second season of "Soulmates," since the possibilities here seem endless. The story lines can also get a tad tedious and somewhat cheap. What I do like, however, is the healthy sense of skepticism "Soulmates" brings to the ridiculous yet prevalent belief that there's a special person — aka "the one" — out there for each of us, if only we have the patience and wherewithal to find them. "Soulmates" deeply distrusts this notion and the technology that would guarantee it; there's always the sense that its characters should have never bothered with pseudo-perfection and instead let fate do its random thing.

The show is also good at coming up with characters who, probably much like the modern consumer, will blindly accept what Soul Connex is selling — with the same disregard for their privacy as those who let Alexa, Echo and Ring eavesdrop on their actions, movements, purchases and conversations. There are strong performances from an array of prestige TV's familiar faces — Malin Akerman and David Costabile ("Billions"), Charlie Heaton ("Stranger Things") and Betsy Brandt ("Breaking Bad") among them — but the show lapses into the predictable pace of similar anthology series, where the ideas are many but the results are not always captivating.

Still, "Soulmates" is a nifty enough show for AMC to serve from its pandemic cupboard. It gives us something else to think about in a world that's chock full of actual moral failures. Right now, that might be enough.