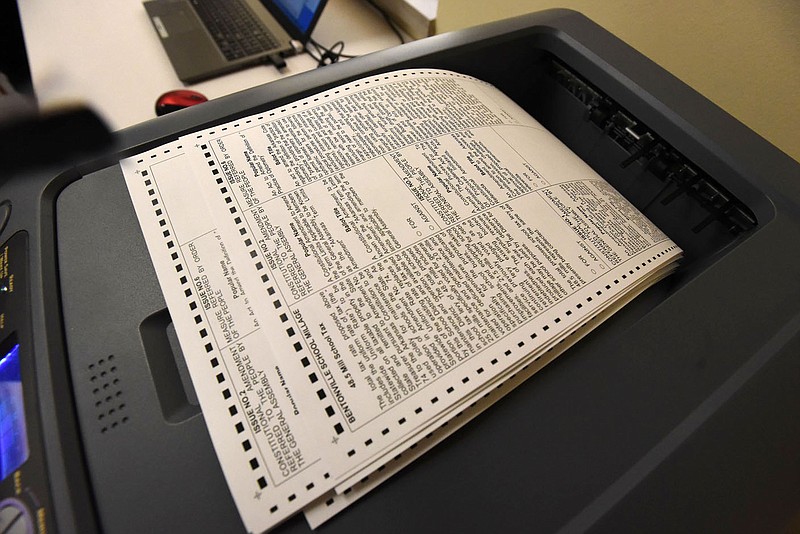 Absentee ballots come out of a printer on Wednesday, Sept. 16, 2020 at the Benton County Clerk's Office. (NWA Democrat-Gazette/Flip Putthoff)

A federal judge in Fayetteville has denied a motion to expedite the schedule in a case regarding absentee ballots for the Nov. 3 election.

U.S. District Judge P.K. Holmes III ruled that Secretary of State John Thurston and six members of the state Board of Election Commissioners have until Oct. 13 to respond to a motion for a preliminary injunction.

The plaintiffs also want absentee voters to have the opportunity to correct any discrepancies before Election Day to make sure their ballots aren't discarded over a technicality or poor penmanship.

Under the current system, voters are notified by mail after the election if there's a discrepancy and their ballots have been thrown out, said David Couch, an attorney for the plaintiffs.

"Really, in Arkansas, voters don't have the opportunity to come in and fix that mistake if they vote absentee," Couch said. "With so many people voting absentee this time, it could be a substantial number of voters that are disenfranchised. You just don't have a chance to cure a mistake or a mismatch and it's a judgment call by the election commission."

"The failure to provide voters with notice and an opportunity to cure these absentee-ballot deficiencies violates voters' constitutional rights and undermines the integrity of elections in Arkansas," according to an amended complaint filed Sept. 28. The original complaint was filed Sept. 22.

According to a New York Times article on Wednesday, Arkansas is one of only four states that match signatures for absentee ballots but do not have a "policy for fixing mismatches." The other three states are Mississippi, South Dakota and Tennessee. Twenty-eight states and the District of Columbia match signatures and allow voters to fix the mismatches, according to the article.

Arkansas voters may hand-deliver absentee ballots to the county clerk until close of business the day before the election or send their ballots by mail as long as the ballots arrive at the county clerk's office by 7:30 p.m. on Election Day, according to the amended complaint.

The motion for preliminary injunction and motion to expedite the schedule were also filed on Sept. 28.

In the motion for a preliminary injunction, the plaintiffs asked the court to order the defendants to require election officials to begin the process of matching voters' "absentee ballot and application materials and determining whether there are any deficiencies based on a missing signature or a mismatch between the absentee ballot voter statement and the absentee ballot application starting 15 days before the Nov. 2020 election, as is authorized under Arkansas law."

Plaintiffs also asked the court to require election officials to order the defendants to provide immediate notice to voters of any deficiencies and permit voters "to cure the deficiency" up to three days after the election.

Alternatively, the plaintiffs asked the court to order the defendants to expand the existing process through which voters may cure certain deficiencies in their provisional ballots up to 12 p.m. on the Monday following the election "to include absentee ballot deficiencies based on a missing signature or a mismatch with a voter's absentee ballot application."

On Tuesday, Holmes denied the motion to expedite the schedule, saying there was some merit to the defendants' argument that the plaintiffs should have filed the lawsuit before Sept. 22. Gov. Asa Hutchinson said on Aug. 7 that the coronavirus pandemic is a good reason for voters to cast absentee ballots this year, wrote Holmes.

At this late date, it is important that any order mandating new election rules doesn't add to voter confusion or suppression, according to Holmes' order.

Besides the League of Women Voters of Arkansas, plaintiffs in the case are Robert William Allen, John McNee and Aelica I. Orsi.

Inman said poll workers can open the outer envelope that has voter information before the election, but an inner envelope containing the ballot isn't opened until Election Day. If something looks amiss when the absentee ballot information is compared with voter registration, the materials are put aside for the county's election commissioners to review.

"I am worried that election officials may be under pressure to reject absentee ballots based on perceived signature mismatches during the upcoming election," Inman wrote in a Sept. 27 declaration filed in the court case. "Pressure on election officials to enhance scrutiny for alleged signature-related deficiencies without any notice to the voter or an opportunity to cure increases the risk that eligible Arkansans will be erroneously rejected this November."